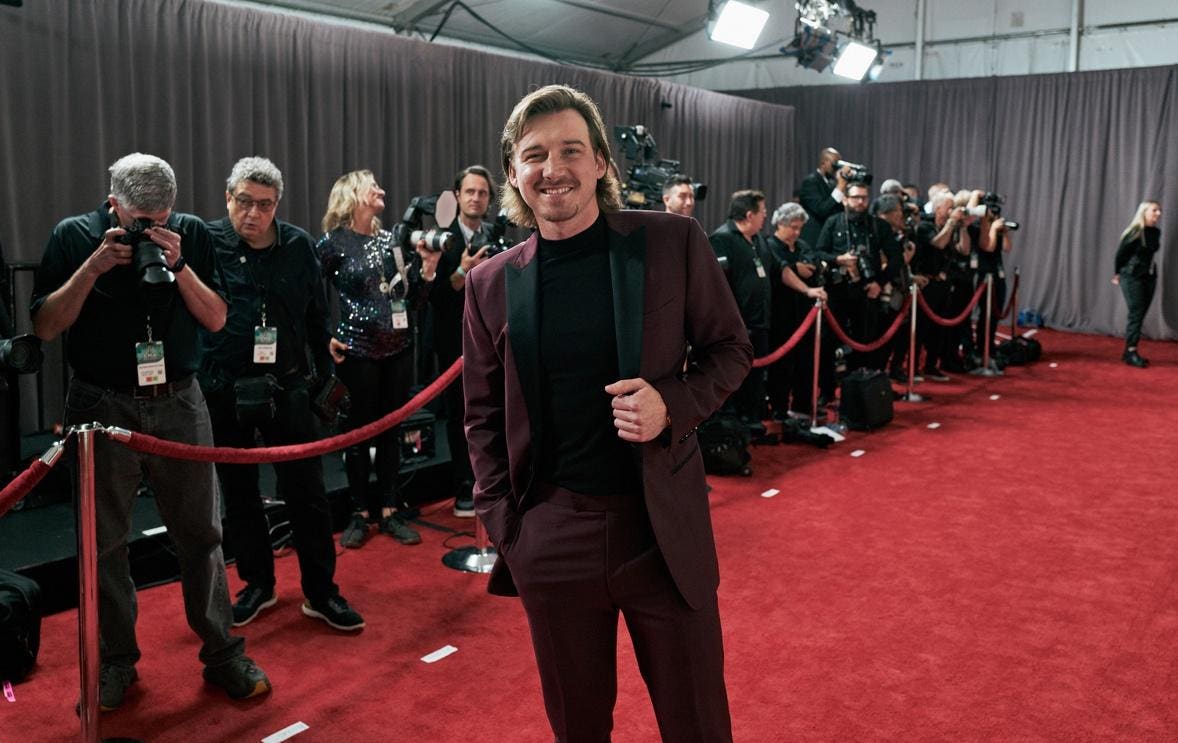 NASHVILLE, TENNESSEE- Last night the 56th Annual CMA Awards also known as Country Music’s Biggest Night™, was live from Nashville’s Bridgestone Arena, and the red-carpet looks were stunning. Who says the stars of Country Music don’t know how to dress up and mix their Country Western styles with red-carpet glam. The Awards were broadcasted live on ABC from 8-11PM/ET, and available to watch on Hulu tonight through May 2023 On Demand.

As usual, the women of Country Music sparkled in sequins, rhinestones, and color.

Little Big Town presented on stage. While the men in the group wore sharp suits, the women stunned in detailed gown. Karen Fairchild wore a fiery orange mermaid cut gown with detail on the bodice and feathers at the lower half, while Kimberly Schlapman wore an off-the shoulder light pink gown with detailing throughout.

Lainey’s gold bell bottom suit by Laura Citron brought a contrast to the red carpet. Her shoes are by Sam Edelman and handbag is by Alexis Bittar.

Actors Michael Shannon and Jessica Chastain presented the Entertainer Of The Year award. Chastain was mentioned for her role in playing Tammy Faye Baker, for which she won Best Actress at the Academy Awards this year. She wore a shimmery blue and black v-neck gown.

Midland, the trio from Texas were sharp in their Western-inspired attire of cowboy boots and hats.

Singer Luke Bryan and former NFL star Peyton Manning took to the stage as hosts. Manning called the CMA Awards the Super Bowl of Country Music. Comedic, they lightheartedly jabbed each other and brought laughs to the audience.

Jimmie Allen was supposed to take to the stage and perform with The Zac Brown Band and Marcus King but sent out a message on Twitter earlier in the day that he was under the weather.

Kelsea Ballerini sang with Carly Pearce and Kelly Clarkson. Luke Combs took to the stage in his every stage garb, a black Columbia fishing shirt to sing The Kind Of Love We Make. And Carly Pearce also paid tribute to Loretta Lynn by signing her song Dear Miss Loretta. Wearing a yellow chiffon gown with sequins, the cut of it was renunciant of a 70s gown, and the sound of the song was reminiscent of Country Music from the 70s.

Carrie Underwood and Morgan Wallen both took to the stage as well, with the latter artist performing his latest sing You Proof. And Thomas Rhett and Katy Perry took to the stage to sing their newly released song Where We Started. Cole Swindell got the audience to their feet as sang his hit with Jo Dee Messina, Heads Carolina.

Luke Bryan sung his latest single, “Country On.” Changing from his tuxedo, Bryan brought the audience to their feet. Miranda Lambert, who has three nominations this year, including CMA Entertainer of the Year performed “Geraldene,” from her latest album Palomino. Morgan Wallen, who is up for the same award performed “You Proof.” For the stage he wore jeans and a t-shirt but changed back into his maroon suit with black lapel. Wallen’s dressed down the suit with a black collarless shirt.

Lainey Wilson and HARDY took to the stage to sing their duet Wait In The Truck, to which the audience gave a standing ovation. It was a big night for Wilson who had the most nominations this year of six, including New Artist of the Year and Female Vocalist of the Year. Taking to the stage a lot throughout the night, she also paid tribute to Alan Jackson with Dierks Bentley, Carly Pearce, and Carrie Underwood; and, she recognized retired service men and women who have turned to music as a way of healing.

One of the most treasured performances was Patti Loveless’ You’ll Never Leave Harlan, performed with Christ Stapleton brought everyone to their feet.

Produced by the Country Music Association, under Robert Deaton as executive producer, Alan Carter as the Director, and Jon Macks at the Head Writer. The inaugural CMA Awards was in 1967 and was a banquet and show. By 1968 it was broadcasted live, which has now made it the longest running, annual music awards program to be on network television. It has been aired on ABC since 2006.