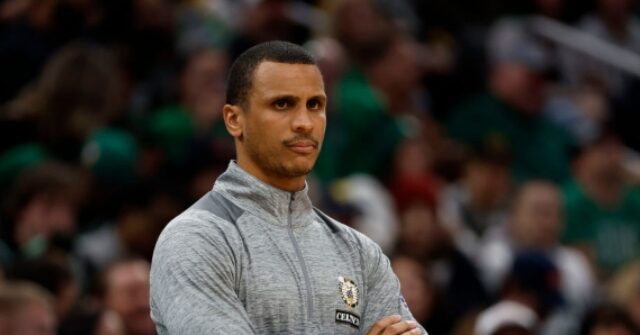 Boston Celtics interim head coach Joe Mazzulla was unimpressed with members of the royal family’s attendance at a Celtics game, telling reporters the only royal family he acknowledges is “Jesus, Mary, and Joseph.”

The Prince and Princess of Wales, Prince William and Kate Middleton sat courtside during the Celtics’ victory against the Miami Heat on Thursday.

During the post-game conference, reporters questioned the Celtics coach and players about the royal family’s attendance at the game.

“A non-basketball question: did you get a chance to meet with the Royal family, and if not, how was it like having them there in the building?” one reporter asked Mazzulla.

“Jesus, Mary, and Joseph?” Mazzulla responded with a straight face.

“The Prince and Princess of Wales,” the reporter replied.

“Oh, no I did not, I’m only familiar with one Royal family,” Mazzulla answered. “I don’t know too much about that one. Thank you, but hopefully, they’re Celtic fans.”

— The Prince and Princess of Wales (@KensingtonRoyal) December 1, 2022

Mazzulla, the NBA’s Eastern Conference Coach of the Month, was abruptly promoted to head coach after the Celtics suspended former head coach Ime Udoka after it was revealed he had an affair with a female staffer within the Celtics organization.

Celtics guard Jaylen Brown was similarly unfazed by the royal family’s attendance at the game.

“It was just a regular game for me,” Brown told reporters about the royal family’s attendance.

Jaylen Brown on playing in front of the Prince and Princess: pic.twitter.com/iyzc8yM5oi

The Prince and Princess of Wales’s presence went largely unnoticed until their attendance was announced to fans during halftime. As the crowd recognized them, some fans reportedly booed them, and chants of “USA” filled the TD Garden stadium.

Jordan Dixon-Hamilton is a reporter for Breitbart News. Write to him at jdixonhamilton@breitbart.com or follow him on Twitter.