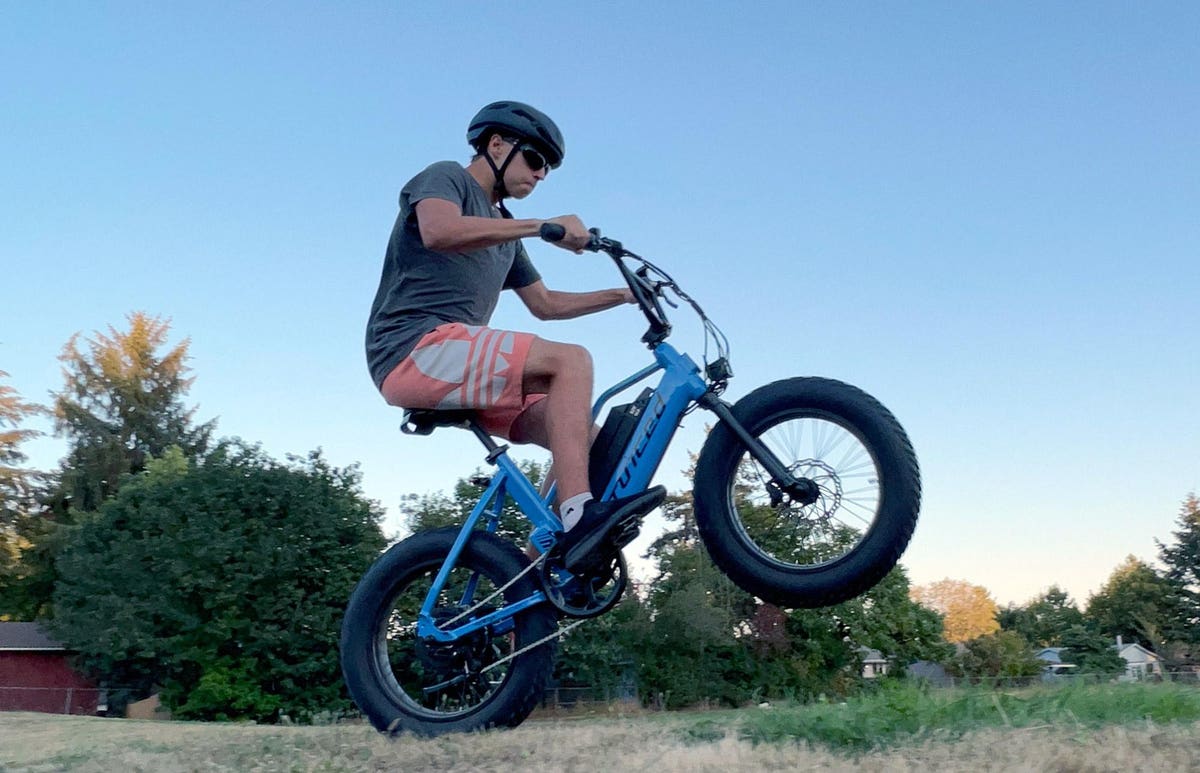 In case you missed the late 1970s and ‘80s, BMX bikes were rad – and a really big deal. They were the perfect bike for a speed-obsessed teen like myself since they were essentially indestructible, unlike my sister’s finicky 10-speed, which seemed to be in the shop every other week. I put untold miles on my beloved chromoly Mongoose with black 5-spoke Tuff Wheels; it was the first bike I rode long distance. Heck, I rode it everywhere.

Earlier this summer, Juiced Bikes asked me if I wanted to review their latest offering, the BMX homage called the Rip Racer, and I initially scoffed at it. A too-short, 66-pound BMX-ish thing on four-inch wide, 20-inch tall wheels? BMX bikes are great fun, but in my day they were lightweight, sharp-handling shredders. The “RipRacer” seemed to be exactly the opposite. But time has taught me to check my assumptions (most of the time), and with a teenager in the house, I thought, well, maybe we could do a sort of generational review thing, so I agreed. A week or so later, a Smurf-blue Class 3 RipRacer arrived in a smallish bike box and my son and I quickly pieced it together and plugged in the charger. The summer hasn’t been the same since.

On paper, it shouldn’t work. Combine a light frame, 750-Watt hub motor, a big 52V 15.6Ah battery and assign it a single speed, no suspension short wheelbase bike riding on those fat little donut tires? Point me towards the circus.

But props to Juiced for not only making it work, but making it work rather brilliantly. And they didn’t forget the critical extras, either. The RipRacer includes hydraulic disc brakes, a hugely bright but small LED headlight and an arc of bright LEDs out back that also work as a brake light. A standard Juiced backlit monochrome LCD display rides on the left bar and holds the power button and pedal assist adjustment buttons. The seat has a quick adjuster on it and a small kickstand rides out back.

It’s simple, but it looks good, and thankfully, it was bigger than I expected it to be. With the seat and riser bars adjusted, the RipRacer is… roomy. Comfortable, even, thanks to a well-formed seat that even has a grab handle on the back. And with a short wheelbase, it’s pretty sporty and turns well, despite the fat tires. Whoever designed this bike should get a raise.

My review bike was a Class III machine supposedly capable of 28mph under assist, but I had my doubts looking at the single gear bolted to the somewhat smallish rear hub motor. But I was wrong again. Tapping the assist level to 3, I started pedaling and the RipRacer quietly whirred as the speed climbed quickly to 20mph while pedaling. Like most Juiced Bikes models, the RipRacer includes a motorcycle-style twist throttle on the right handlebar, and using it for a quick boost when getting underway easily makes up for the lack of low gears. The assist signed off at 20mph, so I punched it up to Class 3 “S” mode and kept spinning the big front sprocket and sure enough, 28 mph arrived in a hurry. Despite the tall gearing, the bike is actually easy to pedal with the assist engaged and a little help off the line from the twist throttle.

With smaller wheels and those fat tires, you might expect the RipRacer to be a bit twitchy at Class 3 velocities, but it was easy to control and tracked true down my street as the speedo showed a tick over 30mph down a gentle grade as I continued to pedal – and not like a crazy person, either. Tall gearing makes it easy to hit the Class III limit and the RipRacer rides like it could do it all day without stress. The disc brakes bring it to a stop quickly and with no suspension, there’s no fork dive under braking, giving riders a better feel for the front end while slowing.

We packed up the RipRacer and some other bikes and headed for an alpine lake in Oregon’s high Cascade Range to meet up with friends for a late-summer campout. There were a gaggle of bikes in the campsite but the RipRacer was an early favorite among everyone there, from the quintet of teens to pretty much every parent. The large battery resting in the RipRacer’s lower frame rail is good for 55 miles according to Juiced, and that seemed a bit optimistic, but like any good BMX bike, the RipRacer was getting a lot of heavy use since everyone clearly agreed it was the most fun bike of the bunch, and it also fit everyone who wanted to ride with a quick seat height adjustment.

And while the RipRacer easily circled a 12-mile bike path around the lake where we were camping, it was often also pointed down gravel and dirt roads where the fat tires afforded copious grip, making everyone feel like a hero rider. Aired down a bit, the tires acted as suspension over the rough stuff, and standing on the pedals let some of the teens (and much older teens) grab a bit of air as they goosed the throttle over small berms and powered down some forest trails. In the end, everyone loved the RipRacer’s combination of size, speed, power and unexpectedly sharp handling. To be honest, suspension on this bike would probably detract from the fun factor.

It’s probably a good thing I don’t design ebikes and just review them, because I doubt I could have ever come up with such an odd conglomeration of ideas, parts and design – and make it work anywhere close as to how well the RipRacer performs. My son heartily agrees (that I should stick to doing reviews).

Areas for improvement? Not many. If anything, it could stand to lose a bit of weight, and I could see a bit lower set of bars as an option, and a better bell would help with safety (Juiced does offer an electric horn). Otherwise, I was duly surprised at how well the bike worked for such a wide variety of riders in terms of size and skill.

At $1,799 for the Class 3 model, the RipRacer is big fun on a small ebike budget. It easily fit riders from 5-foot-2 to 6-foot-1 (me) and shrugged off dirt, water, rough terrain, steep hills and general hooliganism. And while it’s clearly a fun machine at heart, Juiced does offer racks, fenders, baskets and more to make it into a workable commuter. But really, you’re out of the cool kids club if you show up on a RipRacer with fenders. Just saying.

The RipRacer is available for pre-order with deliveries expected in September.