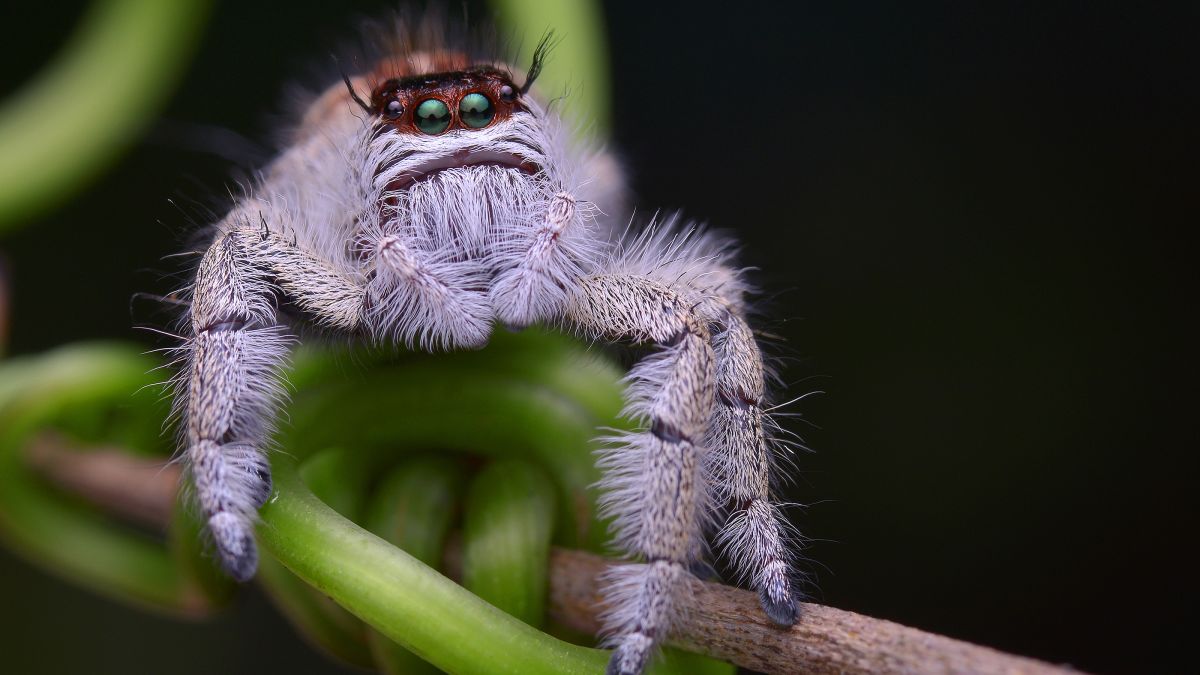 Ever seen a teeny, furry spider scampering across the floor? There’s a good chance you’ve glimpsed a jumping spider.

Jumping spiders are the largest family of spiders, with more than 6,380 species identified by science, according to the World Spider Catalog. The scientific name for the jumping spider family is Salticidae. With so many species, it’s no surprise that jumping spiders vary widely in appearance, habitat and preferred prey. The largest, Hyllus giganteus, can be 0.98 inches (2.5 centimeters) in length, while smaller species, like the colorful Habronattus pyrrithrix, range from 0.19 to 0.3 inches (5 to 8 millimeters) in length.

But what jumping spiders do have in common is their impressive eyesight. These arachnids always have four pairs of eyes, including a large, forward-facing principle pair that make the spiders look rather Muppet-like and cute. These large eyes make jumping spiders a standout among spiders.

“They make their living on foot,” said Nathan Morehouse, a biologist at the University of Cincinnati who studies jumping spider vision. “They have to stalk and jump to capture their prey. … To do all of that, they need really exceptional vision. And their vision, depending on how you measure it, is the best for anything as small as they are.”

Jumping spiders are a diverse bunch. Some are drab, while others sport a dazzling array of colors and patterns, from the blue, red and yellow abdomen of the peacock spider (Maratus volans) to the black-and-white stripes of the zebra spider (Salticus scenicus). Saitis barbipes, a European species of jumping spider, sports a red “headband” of coloration and similarly hued stripes on its third pair of legs. Bagheera kiplingi, found in Central America, is striped with a brilliant emerald green. In many species, males are colorful, while females are often more drab.

Jumping spiders do have a few things in common. They’re usually small, often 0.5 inches (12.7 mm) or less in length. They’re often fuzzy. And they’re distinguishable by their distinct eye pattern of four pairs of eyes, in which the large middle pair sits close together at the front of the face. The face is fairly flat.

How good is jumping spider vision?

Jumping spider eyes are, in a word, incredible. The spiders, despite their tiny size, are better at seeing patterns than elephants are, Morehouse told Live Science. Their pair of central eyes, known as the principle eyes, are almost like a pair of tiny binoculars: They have a large outer lens, then a smaller inner lens that magnifies the image from the outer lens and projects it onto the retina. The spiders are also unusual in that they have muscles attached directly to their retinas. That means they can move retinas up and down, side to side, focusing on different segments of the world without a hint of movement on the outside, Morehouse said — a handy ability for a hunter. Meanwhile, the spiders’ secondary pairs of eyes are less acute, but they provide crucial peripheral vision, Live Science previously reported.

Most species of jumping spider can see ultraviolet light and blues and greens. Some species, though, have evolved special tricks to expand their color vision. These, Morehouse said, tend to be the flashier species, such as the paradise jumping spiders (genus Habbernatus), which are often decorated in shades of red and orange. In some species, a random genetic mutation has introduced an extra copy of the gene that makes the proteins that allow for blue/green vision. This extra copy has then acquired mutations capable of detecting red and orange. Similar mutations allowed primates to develop color vision, Morehouse said.

Other jumping spiders have hacked color vision by developing pigments that sit in front of their blue/green color receptors. These pigments let only red wavelengths of light through. Though the receptors aren’t most sensitive to these wavelengths of light, they react to the stimulus anyway, cuing in the spider that red or orange is present. Birds and reptiles often use this strategy to expand their color vision.

Jumping spiders can also see depth, in a “totally unusual” way, Morehouse said. According to 2012 research, the spiders use something called “depth via image defocus.” Here’s how it works: Jumping spiders’ retinas have four layers of photoreceptors. Because different colors of light have different wavelengths, each layer catches a different color of light in precise focus. In a jumping spider retina, the bottom two layers are both chock-full of green color receptors. But green light that hits one of those layers perfectly in focus will appear a teensy bit blurred on the other layer, and vice versa. The 2012 research found that the spiders use this difference in focus to detect depth.

Where are jumping spiders found?

Jumping spiders are found all over the world, with the exception of Antarctica. They live in tropical forests, temperate forests, grasslands, scrublands and even deserts, where you might find the red-abdomened species Phidippus californicus hanging out on a shrub. They prefer outdoor habitats, but if they find themselves indoors, they’ll often set up shop near a window or door, where there is more chance of catching prey, according to the National Pest Management Association.

Jumping spiders can live up to their name. These spiders don’t hunt by snaring prey in a web, but rather they stalk their quarry and then leap. Despite their tiny body size, jumping spiders can leap up to 6.3 inches (160 mm), according to a 2018 paper in the journal Scientific Reports. The spiders often spin a little silk and set a thread-like “anchor” before they leap, which may help stabilize their flight and protect them in case their landing is off. Jumping spiders most often jump to catch their prey, but sometimes leap to flee danger. They can also be quite clever: Researchers in the 2018 study actually trained a jumping spider (Phidippus regius) to leap from platform to platform. They named the spider Kim.

What do jumping spiders eat?

Jumping spiders are carnivores. They typically eat small insects and other spiders their size or smaller. Some species punch about their weight, though. Many jumping spiders are good at snagging flies as prey, earning them the nickname “fly tigers,” according to the University of Florida. The regal jumping spider (the same species as Kim) has been observed eating lizards and frogs two to three times its weight, according to research published in 2017 in the Journal of Arachnology.

When it comes to diet, the strangest jumping spider is likely Bagheera kiplingi. This Central American spider specializes in noshing on the leaf-tips of acacia bushes, making it a rare example of a spider that eats its vegetables.

How do jumping spiders reproduce?

Mating is serious business for jumping spiders. In many species, males flash their brilliant colors and shimmy in elaborate courtship displays. The peacock spider, for instance, flips up its colorful abdomen and thrusts a pair of legs in the air like a music-video backup dancer, Live Science reported. Research suggests that male spiders will try these displays out on any female jumping spider they come across, regardless of species; this seems to be a way to maximize the chances of mating with the right female while keeping some distance to avoid being cannibalized by a hungry female of the wrong species. The display isn’t only about looks. Research from 2005 showed that in some species of jumping spider, the vibrations from the males’ dances are also crucial to keeping the females interested. The males drum on the ground, rub body parts together and vibrate their whole beings to “sing” to potential mates, said Damian Elias, who studies jumping spider mating behavior and communication at the University of California, Berkeley.

“I liken it to a one-man band,” Elias told Live Science.

Elias and his colleagues are trying to understand why jumping spiders “turn everything up to 11” in the mating game, he said. The spiders’ great vision, rare in the arachnid world, might be one reason, he said. Another is that jumping spiders are a lot more active than many spider species, which hang out in webbing and watch the world go by.

“They are encountering a lot more habitats than a typical spider,” Elias said. “That’s probably a reason they’ve had to evolve such a variety of things.”

When a female shows interest, the male spider uses specialized appendages called pedipalps to transfer over a packet of sperm and webbing to a specialized pocket called an epigynum in the female. Females lay clutches of more than 100 eggs, which they protect with a cocoon of webbing and guard until hatching, according to BugGuide, a site run by Iowa State University. Some species mate multiple times, with the female choosing which sperm to use to fertilize her eggs after collecting several options. Others mate only once.

Are jumping spiders venomous? Do they bite?

Jumping spiders have venom that they use to subdue their insect and spider prey. They very rarely bite humans, however, and will only do so if they are being hurt or crushed, according to the University of California, Irvine. Bites typically cause no symptoms, or they may cause a temporary, mosquito-bite-type welt.