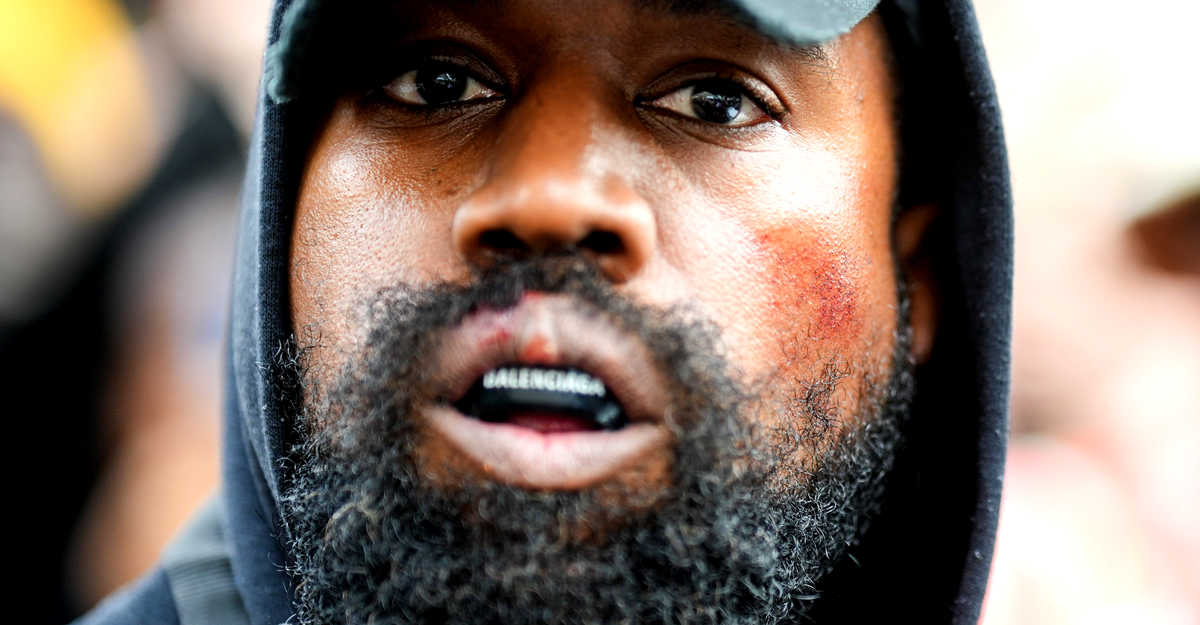 “Hatred destroys the hater.” When it comes to anti-Semitism, the questionable cliché is sometimes literally true. That’s because societies that spend their time pursuing and persecuting Jewish bogeymen fail to address the real roots of their concerns, whether they are political, economic, or personal. In practice, this means that those who embrace the conspiratorial currents of anti-Semitism are frequently the authors of their own demise, flailing against phantoms instead of overcoming their challenges.

This week, Kanye West became the latest anti-Jewish conspiracy theorist to be undone by his own delusions. What began with a few unhinged social-media posts from the artist, who now goes by Ye, culminated in a week-long whirlwind of anti-Jewish invective. In interviews and online, Ye’s tirades took a depressingly familiar form: Unable to address his problems rationally, he resorted to the age-old avoidance strategy of pinning them on the Jews. Angered by ex-wife Kim Kardashian’s public revelation that she had sex with her then-boyfriend in front of a fireplace, Ye railed that “it’s Jewish Zionists that’s about that life, that’s telling this Christian woman that has four Black children to put that out as a message in the media.” Ye also assailed Black performers “doing a movie on a Jewish platform like Disney.” Notably, Kardashian and her family have an exclusive TV deal with Hulu, which is owned by Disney. Simply put, instead of honestly reckoning with the true causes of his pain, Ye offloaded it onto the Jews. Which meant that, in the end, the rapper was left with his pain and not much else.

Yair Rosenberg: Why so many people still don’t understand anti-semitism

He was dropped by his talent agency. His clothing line was pulled from Gap stores. And Adidas, the distributor of Ye’s popular sneakers, severed its ties with him. It took one week of conspiracy theorizing to undo a lifetime of artistic attainment. It was not just Ye, however, who lost out in this deeply depressing affair.

Obviously, Jews did too—and not just from the anti-Semitism itself. Ye’s estrangement from polite society might seem like a victory against anti-Jewish prejudice. It’s certainly better than the alternative. But it will also fuel the very ideology it’s meant to combat. After all, when an anti-Semite suffers consequences for falsely claiming that sinister Jews control the world, he can then point to that punishment as vindication of his views. For Jews, this is a no-win scenario: If they stay silent, the anti-Semitism continues unabated; if they speak up, and their assailant is penalized by non-Jewish society, anti-Semites feel affirmed. Heads, the bigots win; tails, Jews lose. This is the cruel paradox that has perpetuated anti-Semitism for centuries.

American society also came out worse from this debacle. Once more, it learned about Jews and Judaism not from Jews themselves, but through the warped worldview of their despisers. It is good that many have been reminded, yet again, that Jews do not constitute a clandestine cabal bent on world domination. But for anti-Semitism to be meaningfully ameliorated, society will need to learn what Jews are, not just what they are not. People will need to encounter actual Jews in all their diversity, and to experience films and popular culture about how Jews live, not just how they died. Only exposure to the richness of Jewish reality can innoculate someone against the caricatures of anti-Jewish calumny.

Whether American society is up to this challenge remains an open question. Most conservatives have backed away from Ye in recent days, though there are still notable holdouts. That this anti-Semitism came from a MAGA-hat-wearing conspiracy theorist spouting cartoonishly offensive tropes in front of millions made it easier for liberals to reject. Recognizing such prejudice is a lot harder, though, when not all of these criteria apply and the bigotry is more readily overlooked or excused.

For instance: Twitter locked Ye’s account after he declared that he would be going “death con 3” on “Jewish people.” But far more powerful anti-Semites with the real-world ability to deliver death, such as the Holocaust-denying supreme leader of Iran, remain on the platform unimpeded, sharing tweet after tweet of thinly veiled bigotry. Similarly, the rapper Jay Electronica, whose Twitter profile contains the words “I’m with Farrakhan”—a reference to Louis Farrakhan, the anti-Jewish Nation of Islam hate preacher—has used the site to attack Jews by, for example, dubbing a rabbi an “imposter and birthright stealer.” He also featured Farrakhan on his 2020 album A Written Testimony, including excerpts of speeches that echo the tropes expressed by Ye. One track even incorporates a reference to the “synagogue of Satan,” Farrakhan’s favored epithet for Jews. Most of this went unremarked on in the music press, and none of it prevented critics from adding the record and its songs—without disclaimer—to their best-of-the-year playlists. Pitchfork invited Electronica to its 2021 music festival. Oh, and the album was released by the label of the hip-hop impresario Jay-Z, who is featured on eight of its 10 tracks.

Indeed, a lot of what seems novel about Ye’s outbursts is actually not. Earlier this week, social media erupted in outrage over a photograph of neo-Nazis hoisting a Kanye is right about the Jews sign on a Los Angeles freeway. But this band of bigots has been hanging anti-Semitic banners at the site for years. People only noticed this long-standing anti-Jewish display because it was briefly connected to a celebrity.

In other words, Ye’s meltdown momentarily focused attention on anti-Semitism that society prefers not to notice. What he was saying was not new; it was just impossible to ignore. Much like his kindred spirit, Donald Trump, Ye has demonstrated a perverse propensity for exposing the ugly underbelly of abiding bigotry that we’d like to think we’ve overcome. Ye may now have lost much of his platform, but the prejudice he excavated and reflected remains. The solution will not come from blaming one man for society’s tendency to scapegoat Jews, but from the difficult work of dignifying Jews themselves.