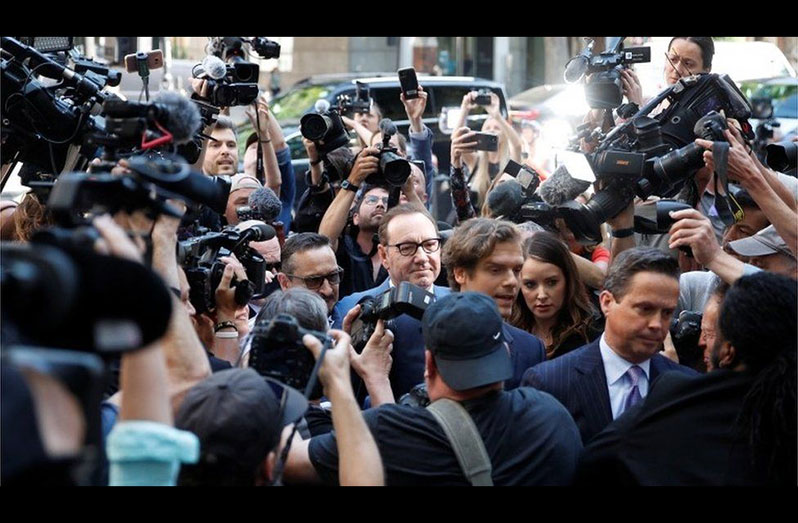 (BBC) – US ACTOR Kevin Spacey has been given unconditional bail after appearing in a London court on four charges of sexually assaulting three men.

The 62-year-old is also facing a fifth charge of causing a man to engage in penetrative sexual activity without consent.

Mr Spacey’s next appearance will be at Southwark Crown Court on July 14 for a plea and trial preparation hearing.

Ahead of the short preliminary hearing, the Hollywood star was steered by his legal team and two police officers through a mass of photographers and camera crews towards the court entrance.

Mr Spacey, dressed in a pale blue suit, dark tie, and wearing glasses, was seated in the dock. His case was heard by deputy chief magistrate Tanweer Ikram.

Patrick Gibbs, QC, who is defending Mr Spacey, said: “Mr Spacey strenuously denies any and all criminality in this case.”

Media Scrum
The actor arrived at the court surrounded by an enormous scrum of cameras and journalists as he tried to get into the building.

Security had to clear a path as he was jostled by photographers trying to film him.

In Court One, Mr Spacey, wearing a light blue suit, sat in the dock. He was asked to stand and give his name, address and date of birth.

He said he was called Kevin Spacey Fowler and was addressed by the court as Mr Fowler although his own lawyer called him Mr Spacey.

Asked by the magistrate if he’d prefer to be called Mr Spacey, the actor gave a small smile and shrug, and said either was fine.

The charges were read out to him. He wasn’t asked at this first court appearance to plead guilty or not guilty but his solicitor said he denies all and any criminality.

The magistrate told him he would be granted bail. After a court hearing of just half an hour, Mr Spacey left the building to face the cameras again.

The most serious charge of causing a man to engage in penetrative sexual activity without consent is an indictable-only offence, meaning it can only be tried in a Crown Court.

Mr Spacey lives in the US where he has family and a nine-year-old dog, the court heard.

In his decades-long career in films and on stage, Mr Spacey has received Oscars for American Beauty and Usual Suspects, and won acclaim for his appearance in the long-running Netflix hit, House of Cards.

He was also artistic director at London’s Old Vic theatre.