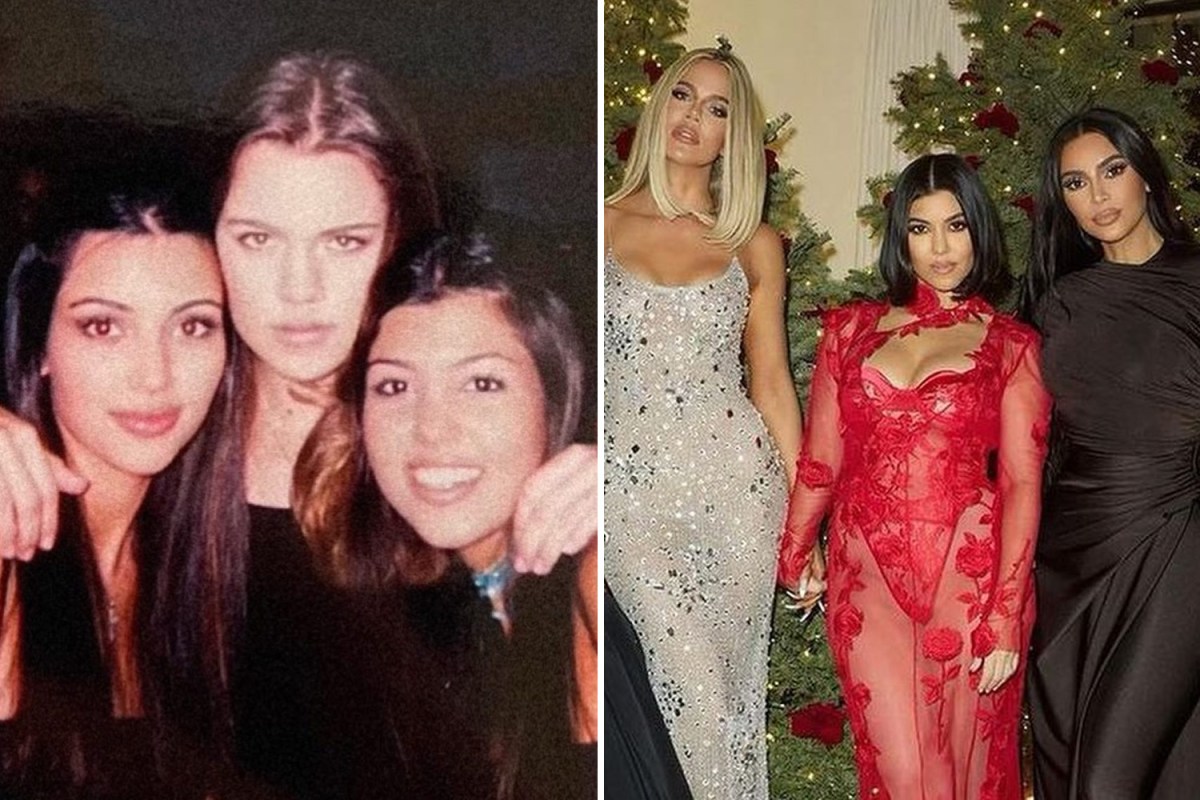 KHLOE Kardashian looks absolutely unrecognizable in a throwback photo of herself with sisters Kim and Kourtney before surgeries and other tweaks.

The Good American co-founder recently admitted to altering her appearance.

Kourtney shared the snap on her Instagram Story on Wednesday after it was shared by a fan account.

In the photo, Khloe is shown standing between sisters Kim and Kourtney.

Both Kim and Kourtney are all smiles in the photo, while Khloe is sporting a serious look.

The caption, posted by the fan account, read: “Sister’s bond” with a red heart emoji.

Kim and Kourtney look much the same as they do now, despite being styled in the fashion of the times.

Khloe, on the other hand, has changed quite a bit since the picture was taken.

In addition to undergoing a nose job, she has lightened and shortened her hair and is rarely – if ever – seen sporing natural nails.

Kourtney’s throwback post comes after Kim shared a throwback of herself and the Poosh founder.

In the post, Kim and Kourtney are shown sitting on either side of Anthony Schiller – a venture capitalist and longtime friend of both the Kardashians and Kanye West.

Kim gushed over Anthony, thanking him “for our 40 years of friendship!”

While little has changed for Kourtney aside from her recently edgier style, Kim was sporting a drastically different look in the photo.

The former Keeping Up With the Kardashians star was pictured wearing her long dark hair in an almost natural looking style, down around her shoulders.

She had bangs framing her face, which she hasn’t had in years.

Kim and Kourtney have been known to share throwback photos.

The mom of three recently posted pics from her Arizona State days, showing how little she’s changed since her days as a Sun Devil.

In one of the throwback photos, Kourtney was shown smiling next to friend Sarah Howard, who was celebrating her birthday the day the photos surfaced online.

She was rocking a very early 2000s style, wearing a white tank top beneath a black leather jacket.

Kourtney was also seen sporting load of lip gloss – a sign of the trends at the time.

Her hair was slightly longer in the picture and she had bangs.

Kourtney captioned the post: “We also went to college.”

Although the photos were taken almost two decades ago, very little has changed with the exception of Kourtney’s style.

She joked in the caption of one such post: “College Years Baby!!! University of Arizona single handedly stopped me from turning into a wild party girl. I remember visiting Kourt on campus and being her designated driver.

“I hated all of the wild parties so much that I stayed home and never wanted to drink or party EVER…so thank you U of A.

“I was never a student there but you shaped my life more than you know.”

Even in much older photos, Kourtney hasn’t changed.

Kim shared a throwback all the way to the 1990s and fans couldn’t help but gush over how similar Kourtney looked.

In December, she posted a photo of herself and her sister from 1994.

Kim sported a huge smile and a short hair cut in the photo.

Kourtney, meanwhile, sat slightly in front of her sister smirking with curtain bangs hanging around her face.