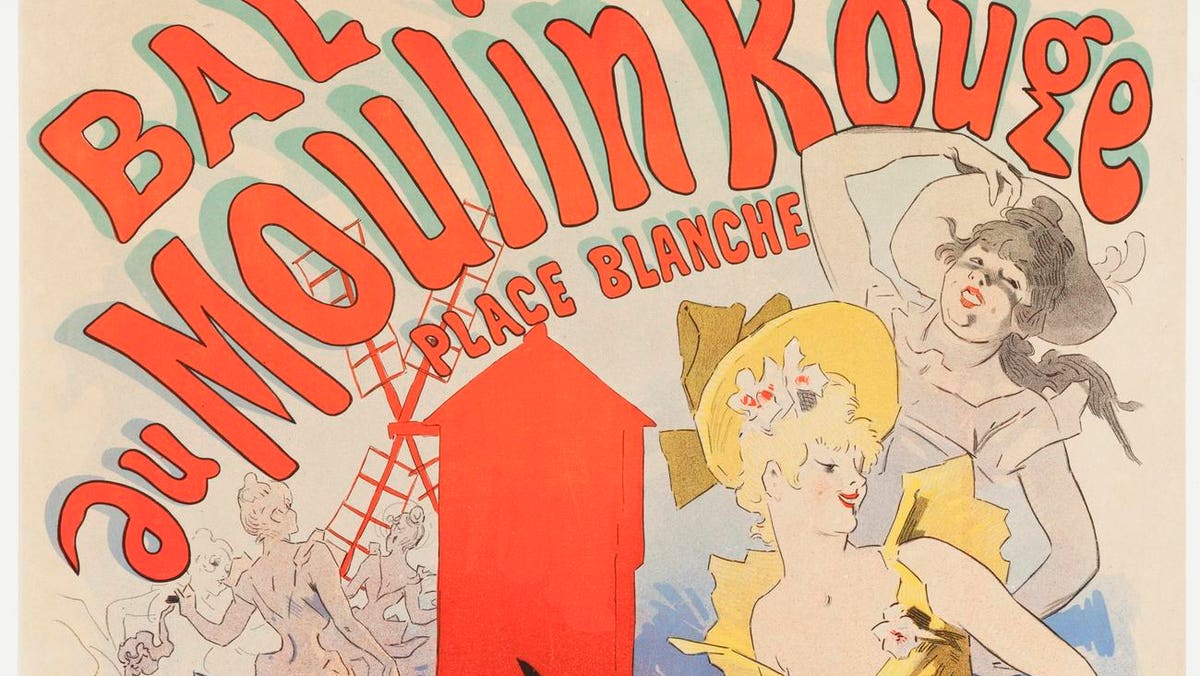 Eiffel’s tower opened the year prior. So too did the Moulin Rouge. A little-known painter with a mangled left ear creates a flurry of masterworks on the outskirts of the city in the final weeks before taking his own life.

Among these enduring monuments of French culture, something–millions of things–much less lasting blanket the city.

One of France’s big billposting companies boasted it could distribute 51,000 posters to 10,000 locations around the country in twenty-four hours. That was in 1879. Their volume had only increased in the 10 years since.

A scourge to some, the increasingly artistic and flamboyant posters were more commonly lauded for how their color and dynamic imagery energized the city’s urban architecture which had been characterized as “monotonous” and “gray.” To admirers, posters turned all of Paris into a common man’s open-air museum. They pitched products to a burgeoning middle class with disposable income: cabaret shows, department store fashions, cosmetics.

Critics and collectors immediately recognized his superior talent and innovations. The unmatched complexity of his compositions. The dazzling action of his figures. The brilliant color.

“How they quiver with life, these little women who powder their faces, listen to the théâtrophone or look at their lamp! The most narrow-minded of people feel there is something more than color on paper there,” theater critic Jean Jullien wrote in 1893 of the posters, praising Chéret in particular.

Now through October 16, 2022, the Milwaukee Art Museum presents “Always New: The Posters of Jules Chéret,” the first solo exhibition in the United States of works by the “Father of the Modern Poster.” Present day Milwaukee and fin-de-siècle (end of the century) Paris are connected through James and Susee Wiechmann, fanatical collectors of Chéret. Over 30 years, the Milwaukee couple amassed the largest and most comprehensive body of the artist’s work in the United States before donating it to the Museum in 2021. Among the 600 Chéret posters, prints and drawings they assembled, more than 100 of the best are on view in the show.

This “golden age” or “beautiful era” in Paris which saw it transform from rubble after the Franco-Prussian War into the fantasy land it is cherished as today continues being widely romanticized. That romance was created and sustained in no small measure due to these posters. How then has one of the chief architects in its visual aesthetic been almost completely overlooked in the United States for the past 125 years?

“He is less known today than some of the people that followed him because these other people also worked in different media,” Nikki Otten, Associate Curator of Prints and Drawings at the Milwaukee Art Museum and the exhibition’s organizer, told Forbes.com. “If you think of (Henri) Toulouse-Lautrec, he was a painter, but also a poster maker. Chéret was primarily a poster maker. Because of the hierarchy of the arts, posters were not as much considered art so he got a little lost to history.”

Henri de Toulouse-Lautrec. Any conversation of French poster art must include him. When most people imagine historic French posters–or La Belle Époque–what comes to mind comes directly from his hand. Cabaret culture. The can-can. His fame today vastly exceeds Chéret. Chéret, however, had direct influence on Lautrec who went through Chéret’s workshop, learning techniques from the master he would carry over to his posters which are now inseparable from the era.

“A lot of the poster artists working at the time (including Lautrec) would have cited Chéret as an influence since he was the first person to put these posters in the streets,” Otten said.

The stately Parisian streets of today bear no resemblance to Chéret and Lautrec’s Paris where a raucous cacophony of advertising plastered nearly every façade.

Critic Raoul Sertat commented in 1896, “We cannot escape the advertisements… (advertising) is all around us, to the left, to the right, everywhere.” Think of today’s digital advertising landscape in Times Square.

It is estimated Chéret’s workshop could produce 250,000 posters per year or 2,500 per day at peak capacity. Merging his business in 1881 with a printing company, acquiring a larger work force and atelier in the process, along with the steam-powered press he owned, allowed him to produce posters in huge volume.

The merger fortuitously coincided with a new law granting greater freedom to display posters. The law allowed posters to be affixed to any surface except those that bore language specifically prohibiting it. Posters began appearing not only on walls, but also in and on new structures dedicated to advertising such as frames, cylindrical Morris columns, news kiosks and even shelters surrounding public urinals. Posters went mobile, carried by men on foot wearing placards–sandwich boards–and pulled on rickshaws.

Despite their enormous production quantity, posters were rarely seen for more than a week. Damaged by weather, covered over or removed by collectors, their short life span–always changing–contributed to the frenzied perspectives of modern life.

“This type of perpetual transformation corresponded to definitions of modernity found in the literature of the era, which emphasized spontaneity and metamorphosis,” Otten explained.

To be modern was to change, rapidly and constantly.

The transience of both the posters and what they advertised—new entertainment and the latest consumer products—contributed to the popular sense that transformation was central to modernity. Art reflecting life; life reflecting art. The medium matching the moment.

“Always New” reveals how these engaging, impermanent, mass-produced posters reflected broader changes in society resulting from the Industrial Revolution which became part of the cultural discourse around those changes–an onslaught of images, mass production of goods, consumerism evolving, advertising booming; within the lifespan of most Parisians, travel transformed from foot, horse or boat to train, the pace of life accelerated, change, especially in the city, became a constant.

All of this was mirrored in the posters and their subjects.

“’Twixt sunset and sunrise; their brilliant colors vanish under the wear and tear of the elements, not to mention the gratuitous insults of street urchins and the encroachments of rival posters, which swoop down by the hundreds in all the arrogance of fresh print and paint,” so commented a British traveler writing for The Pall Mall Gazette, as quoted in the exhibition catalogue, astonishingly, the first English-language museum publication about the artist.

Disposable and immediate as they were, Chéret’s posters were recognized as something much more. Symbolist author Joris-Karl Huysmans was the first to mention Chéret in the press, exclaiming how his “chromos” were more representative of Parisian life than the staid submissions displayed at the official French Salon in 1879.

In December 1889, Chéret had his first solo exhibition of pastels, drawings and illustrated posters which received widespread acclaim. The following year the French government named him a knight of the Legion of Honor for transforming commercial printing.

Bursting with color, some stretching 8-feet-tall, their dynamic figures “diving,” “zigzagging,” “writhing, thrashing about, falling,” as described by critics of the day, Chéret’s posters fill the imagination for a Paris visitors can only glimpse through them, but never experience. Perhaps its better that way, nostalgia almost always besting reality.

One reality that can’t be bested is the view of Lake Michigan from the Milwaukee Art Museum’s Santiago Calitrava-designed addition celebrating its 20th anniversary in 2022, sun sparkling off the water on a brilliant summer’s blue-sky day. Enjoy the view from MAM’s water-level café while savoring a Raspberry Chéret double radler from Stevens Point Brewing. In true Wisconsin fashion, the exhibition is accompanied by beer, James Wiechmann’s other passion being suds; he owns the brewery.

Six-packs are available for sale in the gift shop.