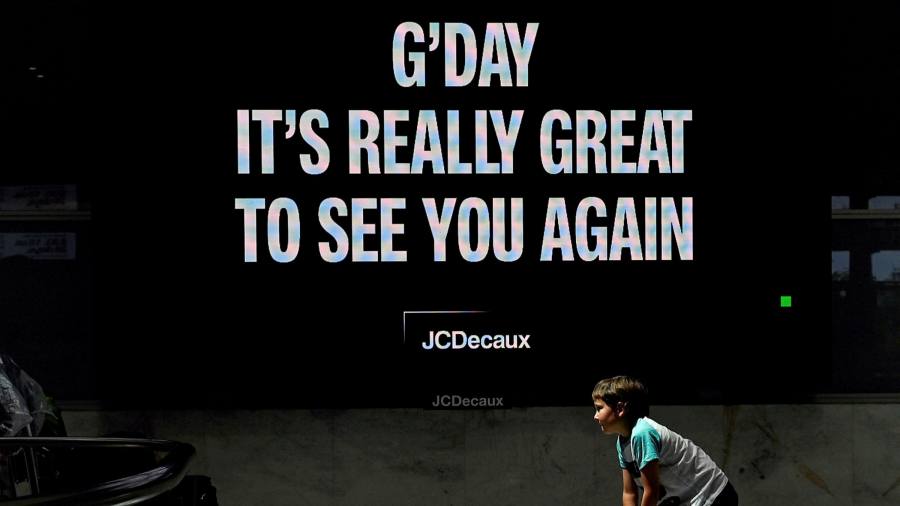 Australia will ease entry requirements for visa-holding travellers from the beginning of next month in a significant easing of some of the world’s strictest pandemic border controls.

Prime Minister Scott Morrison said that fully vaccinated holders of 28 types of visa — including visas for working holidays — would be allowed to enter the country without applying for a travel exemption. The move extended an easing of restrictions that originally applied only to Australian citizens, permanent residents and their families.

Morrison also said Australia would allow visa-less arrivals from Japan and South Korea to enter without quarantine from December, one day after a similar arrangement began for arrivals from Singapore.

Karen Andrews, home affairs minister, estimated that the new rules for visa holders would allow about 200,000 people to enter the country.

Andrews added that visa-holding arrivals would be subject to the quarantine arrangements of their state of arrival, which vary significantly.

In New South Wales, Victoria and the Australian Capital Territory, fully vaccinated arrivals are not subject to quarantine, while those in Queensland must undergo 14 days of isolation in a designated hotel at their own expense.

At least 20 people were injured Sunday afternoon by a truck that drove through a Christmas parade in a suburb of Milwaukee, Wisconsin.

The Waukesha police department said a person of interest had been identified and the vehicle allegedly responsible for the injuries had been recovered. An unconfirmed number of people were taken to hospitals, the police said.

Videos of the parade showed a red sport-utility vehicle accelerating into the participants.

Asian stocks looked set to fall on Monday, with futures in Hong Kong and Japan down and Australian equities dropping in early trading.

The S&P/ASX 200 fell as much as 0.8 per cent after markets opened, while Topix futures in Japan were down 0.6 per cent. Futures in Hong Kong were also down.

On Friday, US government bonds advanced while stocks fell as fresh coronavirus curbs in Europe and hawkish comments from US policymakers prompted investors to shift to safe-haven assets.

The broad-based S&P 500 equity index closed the day down 0.1 per cent after fluctuating between minor losses and gains, as a rise in technology stocks was tempered by falls for financial services groups and US energy companies. Despite the loss, the index ended the week 0.3 per cent higher.

The Nasdaq Composite index, which is stacked with tech and healthcare companies, ended the day up 0.4 per cent, marking its second consecutive record close.

The yield on the 10-year Treasury note, meanwhile, fell 0.04 percentage points to 1.55 per cent as the benchmark debt security rose in price.

Chileans will cast their ballots on Sunday in the first general election since mass anti-government demonstrations two years ago, with voters leaning towards extremes as they reject the political establishment.

The elections, which will probably go to a run-off in December, are seen as a referendum on the Chilean economic model that has delivered some of the best growth in Latin America in recent decades but failed to share the benefits widely among the population.

“Those who are poor, die poor. The riches of our country are badly distributed,” said Carolina Cavieres, a 35-year old mother of two who was casting her vote in La Pintana, a working class suburb to the south of Santiago.

Outside the polling station, 50-year old José Peredo, who moved to La Pintana in 1983 when it was still countryside, said Chileans were disillusioned because “[the elite] want all the cake for themselves . . . they promised us equality if we became a democracy, and see what we have.” He gestured towards the lines of cramped social housing that overlooked a congested highway.

What to watch in Asia today

Markets: Asian stocks looked set to fall on Monday with futures in Hong Kong and Japan down and Australian equities dropping in early trading. US stocks fell on Friday as fresh coronavirus curbs in Europe and hawkish comments from US policymakers prompted investors to shift to safe-haven assets.

Michael O’Dwyer in London and Tabby Kinder in Hong Kong

HSBC bosses fear they will struggle to convince some of the UK’s largest accounting firms to bid for the bank’s $94m-a-year audit after initial outreach to contenders suggested a number of Big Four firms were reluctant to take on the role.

The UK’s largest lender is preparing to tender next year for the audit of its accounts from 2025, people with knowledge of the matter told the Financial Times.

HSBC has been audited since 2015 by PwC, which is eligible to bid for another 10 years in the role.

But the bank is already expecting difficulty in attracting pitches from the other Big Four accountants — Deloitte, EY and KPMG — because some candidates have expressed concerns over possible conflicts with lucrative consulting projects and the scale of resources needed to audit it, people familiar with the matter said.

The number of jurisdictions in which HSBC operated, the resources and technology required, and the risk involved were all issues in attracting auditors to bid, one of the people said.