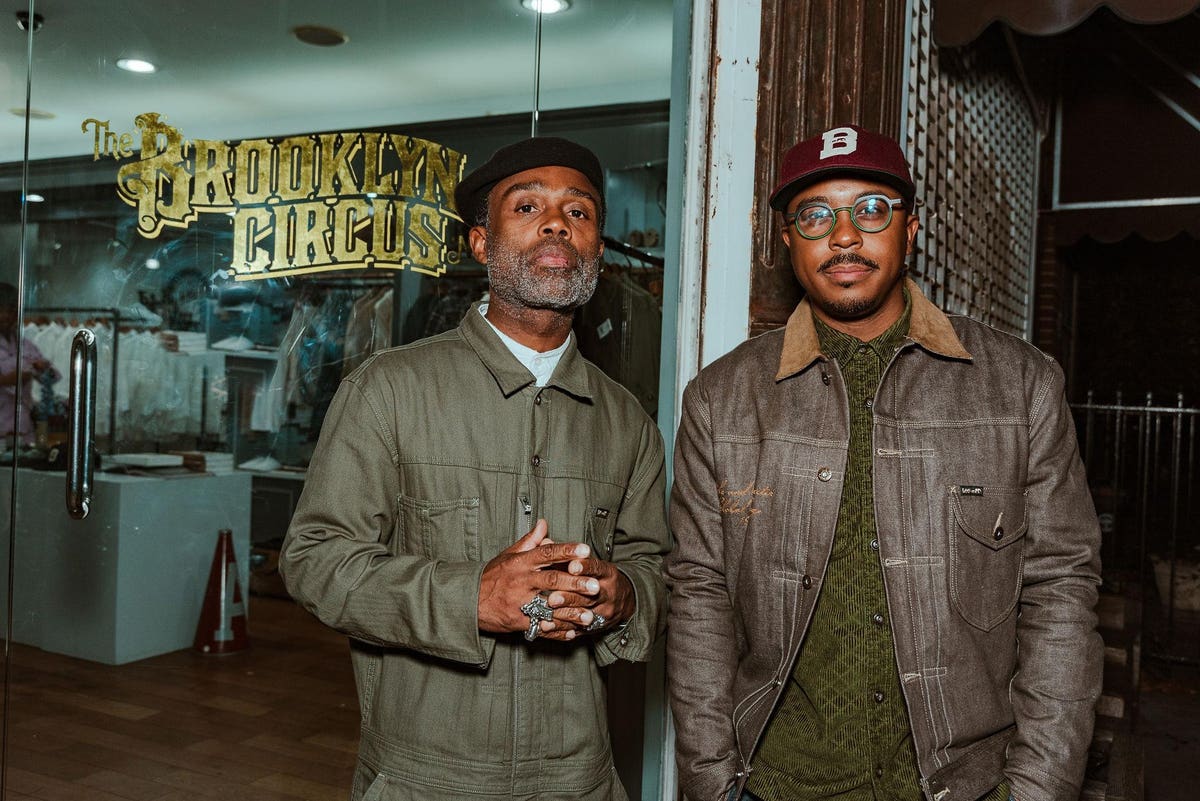 Based in Greensboro, NC, Lee® has had 133 years of manufacturing iconic denim workwear for cowboys, rangers, and those seeking garments that would outlive their work and passions. That classic American heritage is what The Brooklyn Circus, founded by its Creative Director Ouigi Theodore, has built its brand on over the past 15 years. Theodore states, “The Brooklyn Circus finds inspiration in the pages of history, so collaborating with a heritage brand like Lee to highlight the history of the Black working west made perfect sense.”

Ironically, Theodore has expressed his 100-year plan as a designer, creating a label and lifestyle that educates and elevates communities through fashion. As inspiration, Lee has opened its vault of archival workwear and western heritage silhouettes to The Brooklyn Circus, offering a fresh take on an American classic and fashion staple, Lee jeans.

“This moment is an important chapter for me,” Theodore points out. “When we talk about heritage in the fashion industry. We’re talking about clothing and all these objects. But this is heritage – this is legacy. We’re talking about ‘Sed’ [Sedgwick Cole Jr.], who came to The Brooklyn Circus as a customer, became part of the family, and now is a part of BKc history. Leaving the BKc to sharpen his tools, improve, and bring that back home. This is an amazing moment. If I can continue to do this for the rest of my life, I’m golden.”

Sedgwick Cole Jr., Lee’s Global Director of Men’s Design, the Lee design team, and Ouigi Theodore of The Brooklyn Circus worked closely in creating the narrative of Black cultural influence on the American West. Cole Jr. ultimately started his career in fashion at The Brooklyn Circus, first as a fan, and later on, as a designer working closely with Theodore, foreshadowing a mentorship manifested into collaboration.

“I left New York in 2016 with three kids. I wanted a slower pace lifestyle, so I moved to Greensboro and started working with Wrangler,” Cole jr explains. “Then I moved over to Lee and have been with them four years now. It’s a good brand for me because even coming from The Brooklyn Circus, we appreciate workwear, so it’s the perfect blend for me.”

This blend is seamless between the Global Director and Theodore, “working [at] BKc, we always appreciated vintage garments. Ouigi used to sell Lee in his store. Appreciating those iconic details while also putting a spin on it, from a city vibe. You see that running throughout the collection as far as the graphics, the chain stitching on the jackets, and hidden details to give it a flare.”

“Everything has come full circle. Ouigi and I have built a friendship – like a brother to me slash, mentor,” says Cole Jr. “Putting this collection together was really special. Building this collection out, which ideally is about the Black cowboy, Lee telling its story. Ouigi is telling his story as well. Just two Iconic brands.”

He continues, “Lee can tap into different cultures because we were there in real-time. Concepting this collaboration was very exciting as we worked to blend western and workwear with urban sophistication while keeping the integrity of each.”

The collection consists of a cowboy jacket that takes its cue from the 101 Cowboy Jacket, a unisex varsity jacket, and a staple of The Brooklyn Circus made in Melton wool and leather with a one-of-a-kind embroidered illustration. There are also cowboy jeans inspired by Lee’s original 1925 Cowboy Jean and the Whizit Bib overall, a garment that speaks to Lee’s heritage as the first apparel brand to use zippers in clothing and forge the overall style in workwear. These pieces, among other garments and American-style staples, are designed and crafted with The Brooklyn Circus aesthetic.

Cole Jr. is a purest in this sense, expressing his admiration for workwear design in “every detail from the Japanese Selvedge denim to the Melton wool fabric and exclusive patterns and pallets twist these two stories together. The final result is a unique collection that makes you say, ‘Wow, this is so new and fresh.”

The story of the cowboy rumors of rebels of society, whether rancher, a ranger, runaway slaves, indigenous natives, or outlawed citizens seeking sanctuary and a new existence in America. This collaboration inspires a new tale of American history in the Black Cowboy displayed in garments.

“Ouigi is known for his collegiate varsity jackets – I have three of those.” Cole Jr. notes. “Going into the collaboration, Ouigi says, ‘Hey Sed! Why don’t we spin it? And that kid who could be a Black ranger or Black cowboy is now off to college. He’s still a cowboy but in an urban environment.’ That’s how we twisted the collection up, and you’ll see that thread running through it.”

Cole Jr. explains his awareness of an iconic but forgotten culture, “It’s important to tell that history and look through that lens. I’m from the D.C. area, and there are cowboys in D.C. There are cowboys in Phili and cowboys in Brooklyn. A lot of people don’t know that. it’s not like they don’t exist, so it’s important for us to shed some light on it. That’s what this collection is about.”

A pioneer in purposefully designed denim and American iconography, Lee’s heritage is home to innovative fits, era-defining silhouettes, and legendary details in styles that are character driven in the story of the American cowboy. “We’re all characters in this 100-year plan,” Theodore describes.

He concludes by stating that “what Spike Lee did with his movies – you sometimes saw Spike as a character in his own movies – It’s always a cameo opportunity. Like what Oprah did with broadcasting, we’re trying to do in denim, in varsities – in clothing. The opportunity to tell our own story and not feel like we’re caricatures in someone else’s thoughts and process.”