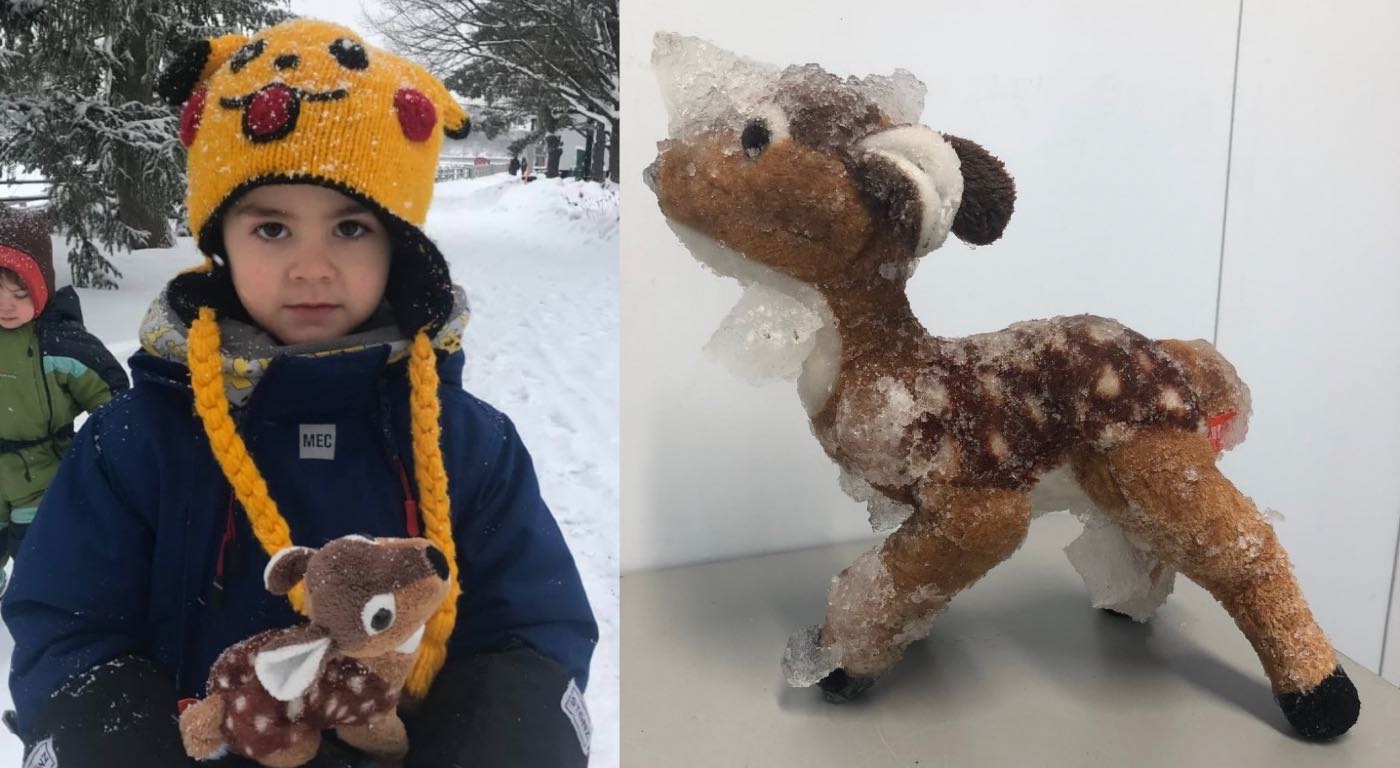 Everyone knows Santa’s favorite red-nosed reindeer knows how to fly. Unfortunately, his namesake, Rudolph, a beloved stuffed toy fawn belonging to 4-year-old Nico Lavallée, did not.

Sadly, Nico found that out the hard way while on a walk with his mom, Brenda Duke, and siblings 2-year-old Santiago and 6-year-old Sebastian when his little brother decided to test his pitching arm by tossing the “stuffie” over the railing next to the frozen waters of Ottawa’s Rideau Canal.

Unable to retrieve his best buddy, Nico and his family returned to visit Rudolph more than once. Luckily, the plush Bambi landed in close proximity to a distance marker sign, so he wasn’t too hard to find, but prospects for a homecoming didn’t look good.

After several days’ of falling snowflakes, the forlorn fawn began to slowly disappear beneath a blanket of white, leaving behind only a telltale bump.

That’s when older brother Sebastian came up with an idea. During the pandemic, neighborhood social media had become a lifeline to a community isolated by the lockdown. Sebastian urged his mom to reach out to neighbors to see if anyone might be able to help retrieve Rudolph.

Duke was skeptical at first. “I didn’t want to bother anyone. I don’t think anyone would care,” she told CBC News.

But Sebastian convinced her to give it a shot, so she took to Twitter.

“If anyone happens to see a ‘stuffie’ reindeer (I think it’s a fawn actually) when the canal opens my kids would be grateful,” she tweeted with an accompanying photo showing Rudolph’s last known whereabouts circled in red.

“Toddler brother threw it in. I know it’s unlikely since they clear snow now and it will be even more buried but my 6-year-old asked me to post here. They come visit it on our daily walks now; it’s the little mound you see.”

As hard as it was to believe, a mission to rescue Rudolph was quickly mounted. Even the National Capital Commission (NCC), signed on, pledging to put its skateway squad on the lookout.

After several hours of relentless searching, our courageous NCC Skateway team saved a stuffed baby deer from a most tragic end. He is now safe and sound while he defrosts!

We know a young owner who will be very happy to find him. 😉🦌 pic.twitter.com/mGcImYFV1c

Lo and behold, in the twinkling of one vigilant crew member’s eye, Rudolph was—though frozen and a bit soggy—MIA no more.

After he’d been thawed and groomed, the prodigal stuffie was reunited with a joyful Nico and his grateful family at NCC headquarters.

All thawed out and headed home! 💛
The stuffed deer heroically rescued by the NCC Skateway Team has now been reunited with its best friend. Smiles all around! pic.twitter.com/kSZqTpkaVv

In a world rife with so many negatives, it can be easy to lose sight of the positive ones. Sometimes it takes focusing on small acts of kindness to put things in perspective.

“You just have to just have to ask,” said Duke. “People do care. Assuming that they don’t is something that adults do… [My kids] are growing up knowing that other people have our backs and other people care, and that’s really heartwarming.”

“This stuffed baby deer isn’t the only thing melting,” a watcher named Monica Ward seconded from her perch in the Twitterverse, “so is my cold, cold heart.”

We’ll just file this one under, “I’m not crying; you’re crying,” shall we?

SHARE This Sweet Rescue Story From Canada With Your Pals…