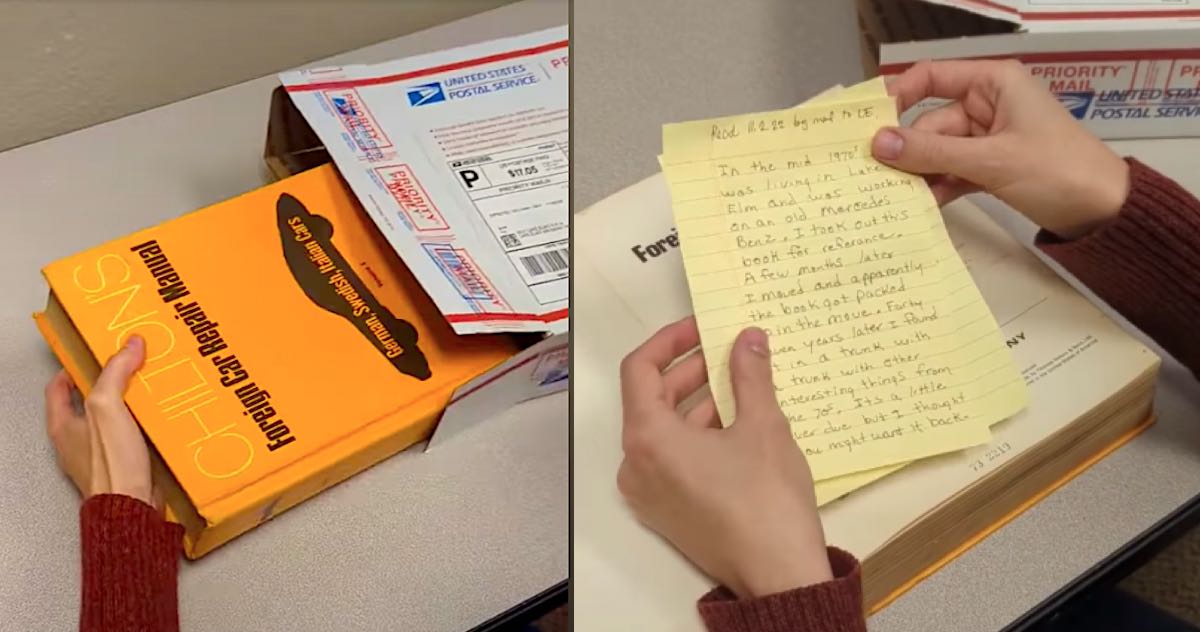 47 years ago, a Minnesota man walked into his local library and took out a book that subsequently got lost during a move.

Now, nearly half a century later, he returned the book with an apology letter and a donation to cover the cost of a new book.

He returned it anonymously, and over the mail—”wisely” as local news WREG Memphis described it, “thereby avoiding the disapproving glare of any librarians at the front desk.”

The book was “Chilton’s Foreign Car Repair Manual” and was checked out in 1975 from Lake Elmo location of the Washington County Library, and it included the following explanation:

“In the mid-1970s, I was living in [Lake Elmo] and was working on an old Mercedes Benz. I took out this book for reference. A few months later I moved and apparently the book got packed up in the move. Forty-seven years later I found it … in a trunk with other interesting things from the ‘70s. It’s a little overdue but I thought you might want it back,” the borrower wrote.

RELATED: 8-Year-old Slips His Handwritten Book Onto a Library Shelf—And It Now Has a Years-Long Waitlist

“My apologies to anyone in Lake Elmo who was working on an old Benz in the last 47 years. I probably can’t afford the overdue charge but I will send you enough for a new book.”

The librarians contacted were just happy to have the book back, and seemed charmed enough by the gesture. They wrote on the library Facebook Page that they no longer charge daily late fees, but only flat replacement fees if the book was lost or damaged.

They intend to use the money to buy a more updated version, as the pages of the returned book were yellow as grain mustard, and the pictures sill in black and white.

SHARE This Cute Local Library Story With Your Friends…