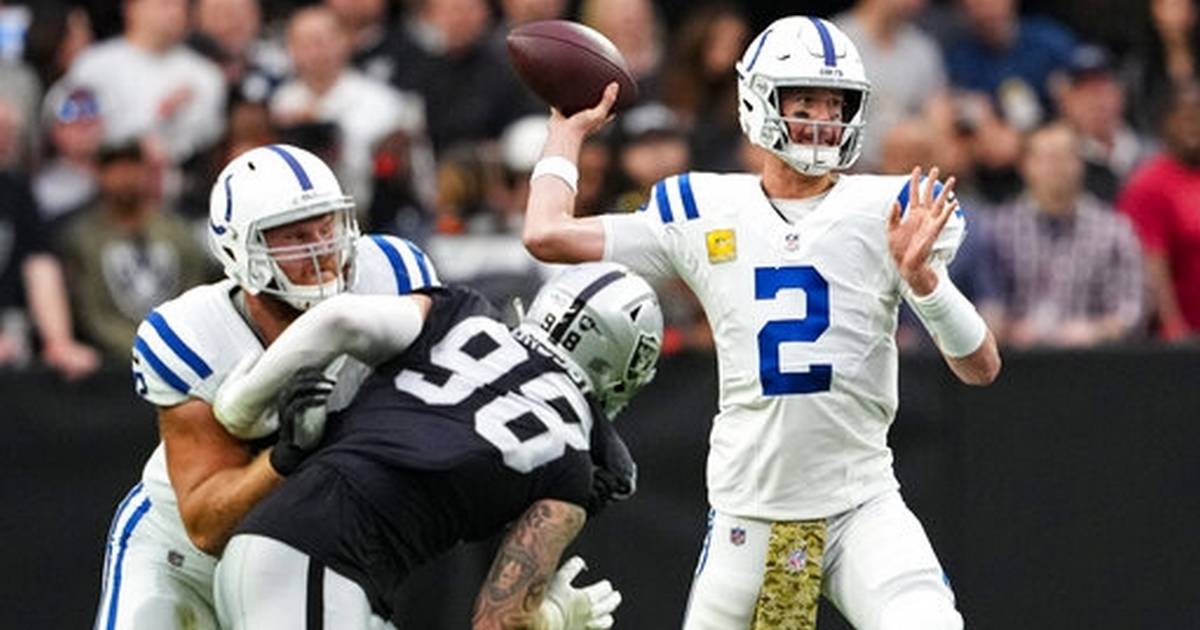 LAS VEGAS — Matt Ryan got his job back as the Colts’ starter under TV analyst-turned-interim coach Jeff Saturday, and the veteran quarterback delivered a 35-yard touchdown pass to Parris Campbell to lead Indianapolis to a 25-20 victory over the Las Vegas Raiders on Sunday.

The touchdown with 5:07 left came shortly after the 37-year-old quarterback converted a third-and-3 with a 39-yard run to the Raiders 36-yard line.

His play helped give Saturday, who just a week ago was an ESPN analyst before being hired despite no NFL coaching experience, his first victory. It also handed the Raiders (2-7) their third loss in a row and will increase the scrutiny on first-year coach Josh McDaniels, who took over a playoff team from a year ago. The Raiders were booed off the field.

Ryan completed 21 of 28 passes for 222 yards, and Jonathan Taylor rushed for 147 yards, including a 66-yard touchdown. It was Taylor’s first 100-yard game since the season opener against the Houston Texans, when he rushed for 161 yards.

The duo offset the play of Raiders wide receiver Davante Adams, who caught nine passes for 126 yards and a TD. But a fourth-down pass to Adams was broken up by Colts cornerback Stephon Gilmore, causing a major celebration on Indianapolis’ sideline.

Saturday showed he wasn’t afraid to make changes, installing as the play-caller Parks Frazier, someone who had never been in that position. Then on game day, Saturday went back to veteran Ryan as his starter. Ryan was benched by previous coach Frank Reich in favor of Sam Ehlinger, who started the past two games.

Two weeks ago, Saturday in his analyst role tweeted that the ‘Raiders look horrible’ during their 24-0 loss to the New Orleans Saints.

They didn’t look so great when the Colts (4-5-1) took a 10-0 lead in the second quarter. That included an 11-play, 70-yard drive in the first period in which Indianapolis picked up five first downs. The Colts had eight the entire game a week ago against New England.

The Raiders didn’t pick up a first down until 11:51 remained in the first half, and Carr missed all five of his passing attempts in the first quarter. Indianapolis outgained the home team 111 yards to 5 in that period, as Las Vegas looked like the team playing under an interim coach.

On one drive, the Raiders lost 10 yards on a holding penalty and another 5 on ineligible player downfield, Carr was sacked for a 9-yard loss, Josh Jacobs rushed up the middle on second-and-long for 5 yards, and Carr threw short of Adams on the third. That sequence of plays caused boos to rain down on the Raiders.

But they finally got something going late in the second quarter, driving to the Colts 4-yard line. Carr rolled right and found Foster Moreau in the end zone for a touchdown with 58 seconds left.

The Colts, however, drove into field goal range, and Chase McLaughlin made his second 48-yard field goal with no time remaining for a 13-7 lead.

Jacobs rushed for a 1-yard touchdown to give the Raiders their first lead, Taylor answered with a 66-yard touchdown, and then Carr hit Adams a 48-yard TD, before the Colts came through with the winner with 5:07 left.

Raiders linebacker Denzel Perryman, who was limited in practice with rib and hip injuries, was placed on the inactive list before the game. Raiders tight end Foster Moreau and Colts linebacker Zaire Franklin entered the blue injury tent in the second half, but both players returned.

Raiders: Play at Denver next Sunday.