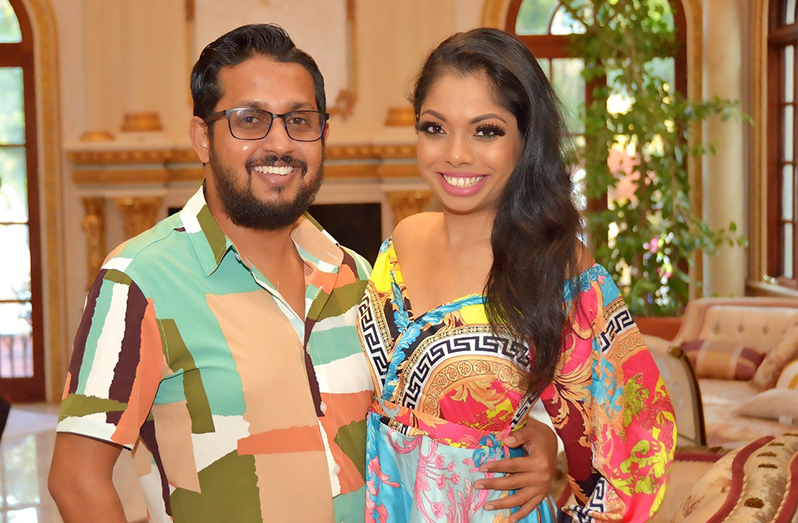 HASHIM ALLI and his wife Melicia Partab-Alli both had an interest in the entertainment industry for as long as they can remember.
Even as youngsters, they’d always have an inclination to one aspect of entertainment or another. It was certainly not surprising to see them pressing on in that regard to this day. Side by side, they are building a name for themselves in the industry.

Hashim, 35, started off when he was just about 10 years old as a dancer. Following this, he took up acting and eventually became a television personality.
Hashim made history for launching the first ever remake of a Bollywood hit single by local entertainers. Finally shifting to pageantry, he continues in that field even today.
In an interview with BUZZ, he reflected that it all started for him as a child when he was a dancer in a youth group at Little Diamond, East Bank Demerara (EBD). The group was housed under the Hindu temple he attended.

As for Melicia, 34, she recalls a love for the industry. “I really love the glitz and glams. Growing up, I always admired this industry; entertainment, pageantry and the whole works,” she shared.
She and her husband knew each other for approximately 10 years before they married. When they eventually joined forces, they already knew how to maintain both their professional and personal lives.

“I had already formed Nachle Productions, but she came and brought the touch that was missing,” Hashim explained.
“She completed me and I feel like together, we are a force to reckon with,” he said, adding, “What we have is something very special. Over the years, we have developed an understanding that helps us to progress.”

The Allis, now parents of a four-year-old son, still engage the arts through their weekly television programme, Bollywood Hits, which is broadcast on the National Communications Network (NCN). Their radio show, Bollywood Masala, is also thriving.

Commenting on some of their accomplishments in the pageant world so far, Hashim related: “We brought the only international pageant title in 2017 – the Miss Global International Pageant winner. That was under our directorship.

“We were also able to debut many beauty queens, including the most recent Beauty Razack. I founded the Mr. India Guyana pageant; I worked on that project for four years and launched it in 2020.”

Hashim said he finds fulfilment in seeing young people grow and accomplish their dreams. “If I can create a platform to have them acknowledged or promoted, I would have done my share of good,” he said.

Melicia feels the same way as she was not one to be given the ‘push’ she needed as a young person in the industry.
“I had to kind of do it on my own. So, when you see a young person with a unique talent and with the ‘it’ factor and know you can mould them, you don’t want to lose the opportunity of helping them,” she said.

Melicia and her husband take great delight in helping youngsters to see their true potential.
Hashim and Melicia, both being creatives, have their days when their ideas clash and when they both feel strongly about their way of doing things. This is one of the challenges that come from working together in the industry.

“If you don’t work through the issues, you’re going to be working at each other. But we look to see how we can merge our ideas and keep both parties happy,” Melicia shared.