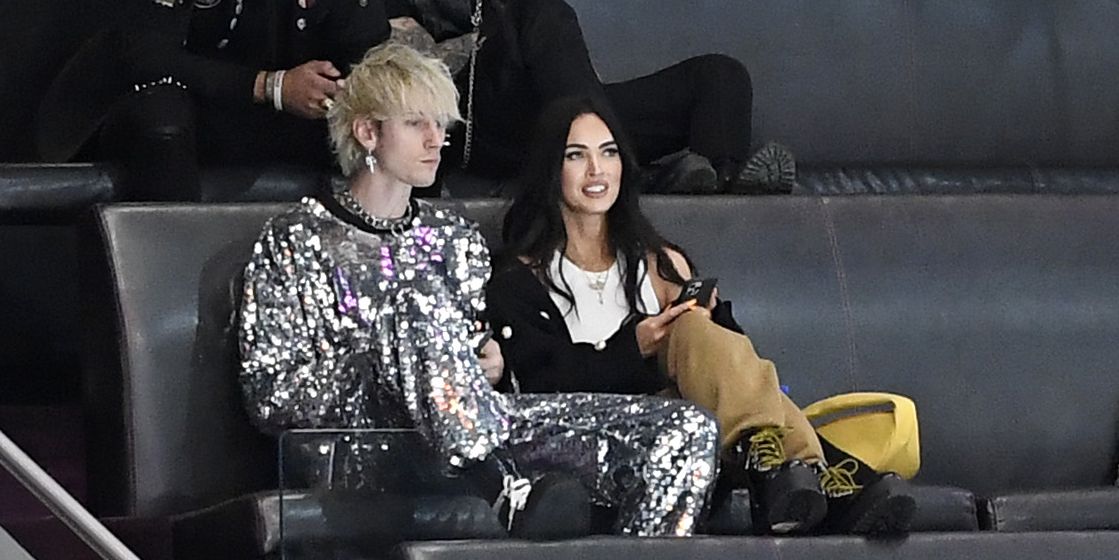 On Saturday, Megan Fox joined Machine Gun Kelly at the 2022 Honda NHL All-Star Game for a cute date night. MGK, or Colson Baker, was headlining the intermission show at the T-Mobile Arena in Las Vegas. But they stuck around for the game, sitting in the stands, laughing and talking together.

Fox wore a white tank top with a large black jacket, baggy tan pants and combat boots. Machine Gun Kelly was glamorous for the stage in his matching silver sequin-covered shirt and pants.

The pair is recently engaged after about a year of dating. MGK proposed to Fox in Puerto Rico, giving her a diamond and emerald engagement ring that symbolizes the two of them by using their birthstones. They met while on the set of movie Midnight in the Switchgrass. Fox then appeared in a music video for Machine Gun Kelly’s song “Bloody Valentine.”

A source told People at the time that “nobody was surprised” by the engagement.

“They had been talking about it for a while,” the insider explained. “For those two, it was very much a love at first sight situation. They spend every waking second together. They are always together for each other’s professional and personal events”

They added, “She always likes to be by his side. All of his friends and colleagues know that if they’re going somewhere, nine out of ten times, Megan will be there.”

But another source said that the proposal itself “was a surprise” to Fox.

“She is excited to get married,” they said.

Fox was previously married to Brian Austin Green, and they have three children together, Noah Shannon, 9, Bodhi Ransom, 7, and Journey River, 5. Machine Gun Kelly has a 12-year-old daughter named Casie Colson with his ex, Emma Cannon.