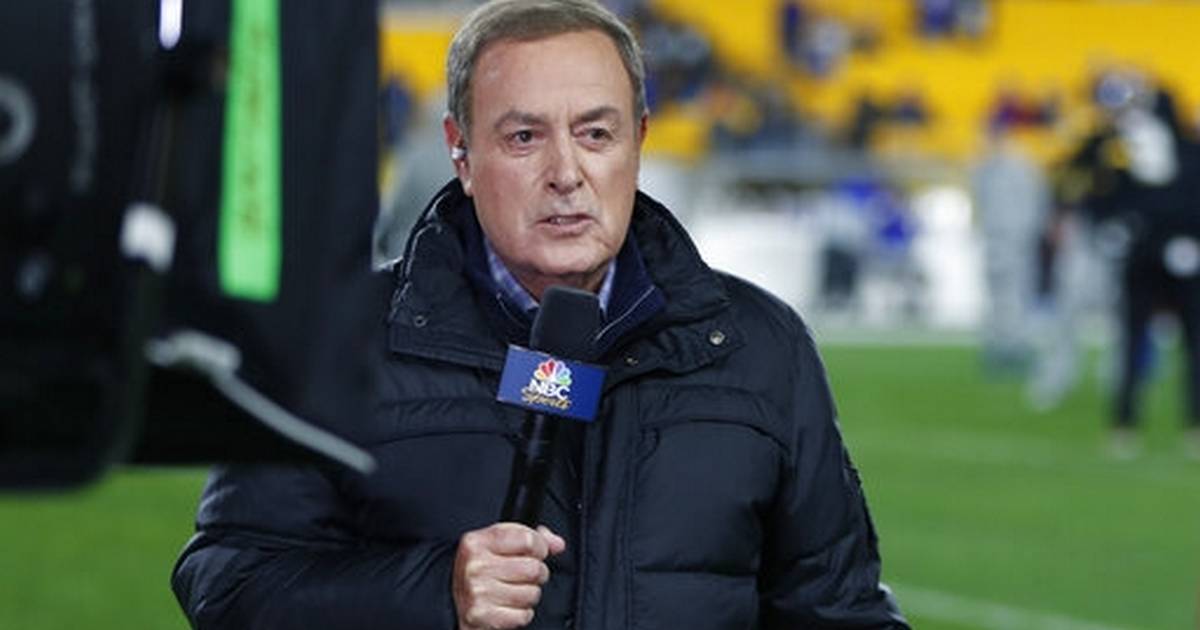 Al Michaels finally gets to call a Super Bowl in Los Angeles and tie the late Pat Summerall for the most called on television.

The question everyone wants answered, though: Will this be Michaels’ final assignment for NBC?

Michaels has been the lead announcer on ‘Sunday Night Football’ since its start in 2006, but his contract expires after next Sunday’s matchup between the Cincinnati Bengals and Los Angeles Rams. The 77-year old hasn’t indicated his future plans, but said he does relish becoming a free agent for one of the few times in a career that has spanned more than 50 years.

‘I don’t know what I’ll be doing, but I do know I will have the opportunity to continue and I want to,’ Michaels said earlier this week in an interview with The Associated Press. ‘I feel great, knock on wood, I’m blessed with very good health, and I love what I do.

‘The time is coming now where after the Super Bowl where I will think about a lot of things. I’ve got a couple of people very close to me who I trust their judgment, insight and what they’ll say in terms of what is next.’

This is Michaels’ 11th Super Bowl, and his fifth for NBC.

NBC signed Mike Tirico in 2018 to take over as Olympics host and eventually succeed Michaels on ‘Sunday Night Football.’ With NBC having the Super Bowl in Los Angeles and Michaels’ contract ending, this upcoming offseason may be a transition point.

Tirico, who has called some NFL games the past couple of seasons, will do double duty next weekend – hosting NBC’s prime-time coverage of the Beijing Games as well as the Super Bowl pregame show. Cris Collinsworth, Michaels’ broadcast partner since 2009, is expected in the SNF booth.

‘Pretty much before the season began, I knew that I wanted to just enjoy this year because it was the end of this particular deal,’ Michaels said. ‘I knew if I got distracted by other things, it would take away from just enjoying the people I work with and just having a hell of a time. And I’ve been able to do that.’

If NBC does move on from Michaels, his next destination could be Amazon Prime, which will become the exclusive carrier of ‘Thursday Night Football’ next season.

Michaels laughed when asked if a deal with Amazon could include other elements besides ‘Thursday Night Football,’ such as a possible reunion with Bob Costas to do a sequel or remake of the 1998 movie ‘BASEketball.’

Cincinnati’s appearance marks only the third time that Michaels has not called a game of one of the participants before they got to the Super Bowl. The Bengals’ last time on NBC’s Sunday night package was 2018 against Kansas City.

ABC’s ‘Monday Night Football’ didn’t have the Rams or Tennessee Titans during the 1999 season, and the Arizona Cardinals did not make an NBC appearance in 2008.

Michaels said he’s been able to watch enough Bengals games so that he isn’t coming in completely cold, unlike 1999 when streaming games or watching them on-demand remained a fantasy. But during his years calling prime-time games, Michaels said the Bengals are pretty low on the list when it comes to how many times he’s seen them over the years.

Ironically, his rise to prominence began in Cincinnati in 1971 when he was the Reds announcer for three seasons.

‘It’s kind of like starting with a fresh palette,’ he said. ‘One of the cool things is we get to introduce the Cincinnati Bengals and their players to most of the nation as opposed to a team like Kansas City, where a lot of people know about (Patrick) Mahomes, (Travis) Kelce and (Tyreek) Hill.’

The Hollywood Park stadium complex where the Super Bowl will be held is only 8 miles from Michaels’ home and marks a perfect bookend to the season. NBC’s first game of the season was the Rams hosting the Chicago Bears.

‘Most of my life has been spent here, even though I grew up in New York,’ he said. ‘I went to the first Super Bowl with my brother in January of 1967. So to go to the first one, and then to broadcast this one is pretty amazing. What can I tell you? I’ve had a hell of a ride. And believe me, nobody appreciates it more than I do.’