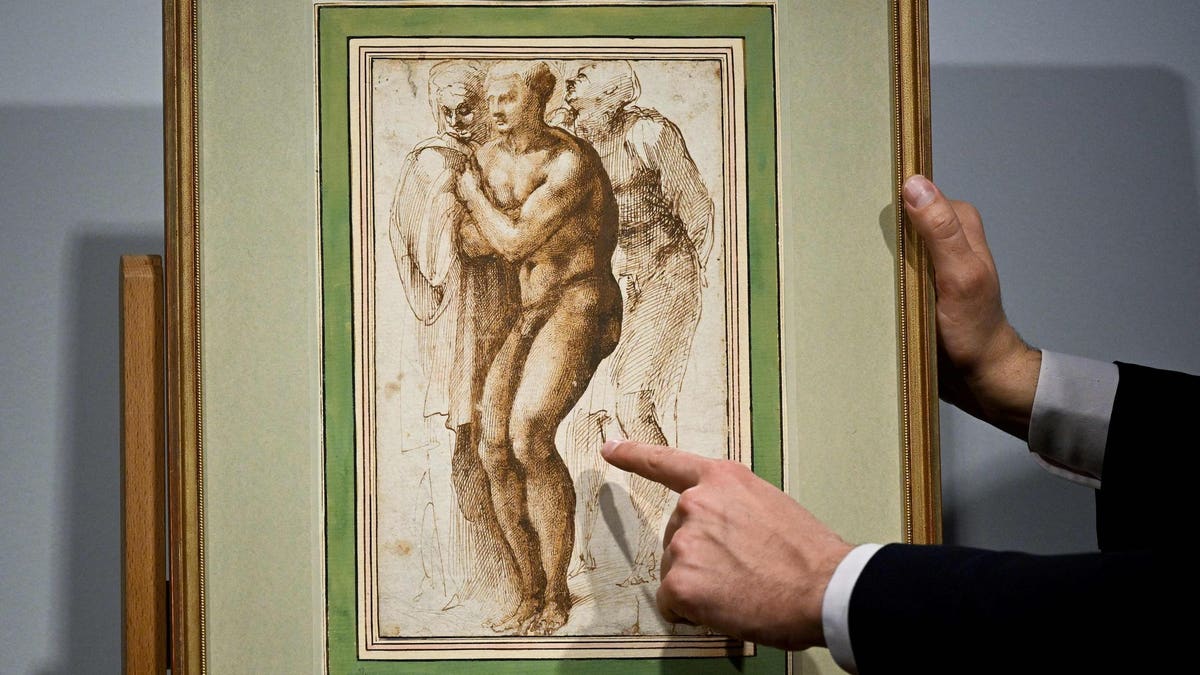 An early drawing attributed to Michelangelo that was rediscovered in 2019 after going under the radar for centuries sold for $24.4 million in Paris Tuesday, breaking the previous record for any work by the old master at auction.

Michelangelo’s “A nude young man (after Masaccio) surrounded by two figures” broke multiple auction records, including surpassing the $10 million that his previously most expensive work—another male nude drawing called “The Risen Christ”—sold for in 2000, Christie’s said.

The nude, shivering man Michelangelo drew is based on a figure in Florentine artist Masaccio’s fresco “The Baptism of the Neophytes” that is located in Santa Maria del Carmine, a church in Florence by which Michelangelo was entranced, according to his contemporaries.

In his drawing, Michelangelo expanded on the original fresco by painting the main figure with more defined musculature—which would go on to be one of the defining characteristics of Michelangelo’s work—and drew two other figures behind him that bear resemblance to other Michelangelo sketches held in museum collections, Christie’s said.

The drawing most recently went to market in 1907, when it was attributed to the “school of Michelangelo” in an auction in Paris.

It remained in private hands up until 2019, when Christie’s was asked to value a collection in France and the auction house’s old master specialist Furio Rinaldi attributed the drawing to Michelangelo himself, a claim that was backed up by other leading scholars.

Following the discovery, France designated the drawing as ”a national treasure,” which allowed the government to slap an export ban on the work so French museums had the opportunity to purchase it, though the designation was removed just before the Christie’s sale was announced earlier this year.

Michelangelo was one of the most accomplished artists of the Italian Renaissance and is maybe best remembered for being the architect of St. Peter’s Basilica in Rome and for his fresco on the Sistine Chapel ceiling, also at the Vatican. Michelangelo is believed to have completed the nude that sold Tuesday in 1496, when he was about 21 years old and in the beginning stages of his art career. “His drawings are very rare, and there are no known paintings or sculptures by him outside public collections,” Stijn Alsteens, Christie’s head of old master drawings said in a statement.