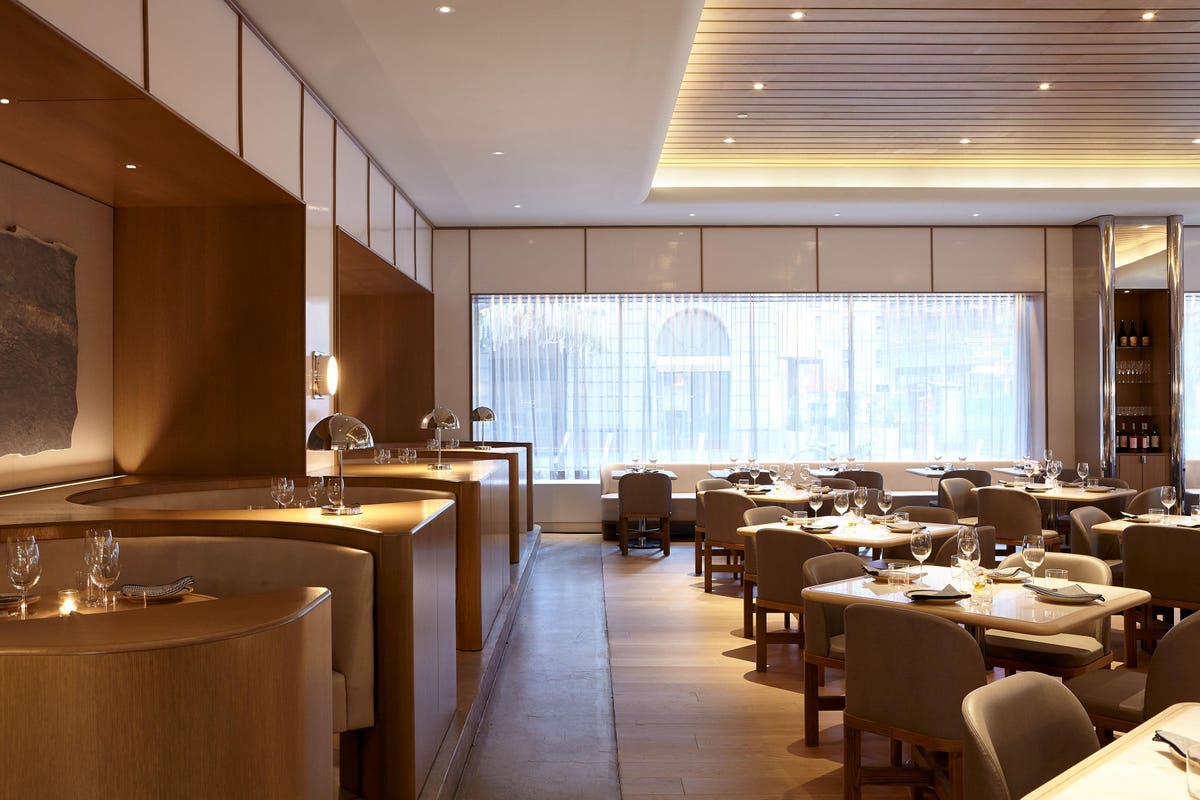 New York City may be roaring back to life following its standstill in the wake of the pandemic, but Midtown Manhattan is still somewhat trailing behind.

In the before times, this area was the heart of the city – businesses, tourism, Broadway, and, of course, restaurants and bars – were a constant reminder of why we love this urban metropolis that never sleeps. With Broadway not ready to return until September, tourism numbers inching back up and most businesses working remotely until the fall, the only thing to do in Midtown is go out to eat.

What used to be the hardest reservations to score in town can now be had with relative ease. Where else in the world can you eat at multiple Michelin-starred restaurants like Le Bernardin, Aquavit, The Modern, and more, all within a few blocks of one another, and all without the hassle of hearing “We only have 5:00 p.m. or 10:00 p.m., or please try again next month.”

One of the brightest spots of the neighborhood’s dining landscape is the new hit IRIS, from the renowned Michelin-starred chef John Fraser. In normal times, this sleek Mediterranean spot would instantly become a hot ticket reservation with a long waiting list to boot. In fact, it’s well on it’s way to getting there- in recent weeks, snagging a table during prime hours has been something of a jockey sport.

Fraser, for the unfamiliar, is a French Laundry alum who is behind the restaurants Dovetail, Nix, The Loyal, 701West, and the newly reopened North Fork Table in Southold, New York. With IRIS, he’s added Aegean-inspired to his repertoire.

Pulling from Fraser’s Greek heritage and travels through Turkey, the 5,000 square foot IRIS is a chic spot with high ceilings, light wood floors, sand-colored tables and leather seating and a glamorous, long bar. Contemporary art hangs throughout the space.

The food is simply prepared, allowing the high-quality ingredients in the dishes to really shine. Starters include mezze (the roasted eggplant dip with raisins and pine nuts is a must), raw seafood like the excellent swordfish tartare with pistachios and pickled fresnos, and Turkish-style flatbreads such as squash blossom with goat cheese.

Heartier options from the Center Table menu and entrees include grilled octopus with candied kumquats, a quail kebab with sage butter, and an Aegean stew with poached sea bass, lobster, and mussels in a shellfish broth with a deep, rich taste.

A piece of advice for fish fans: you can’t come here and not order the pristine whole fish for two. The dorade, sea bass and turbot- all from Spain- are artfully filleted tableside and presented with flavor boosters such as the caper vinaigrette that accompanies the dorade.

In true Mediterranean style, every item on Fraser’s menu is designed to be shared.

Dessert and drinks are notable as well: pastry chef Adriana Adorno Davila is tasked with the sweet ending to your meal, which includes fried cardamom doughnuts with pomegranate molasses and sesame and pistachio baklava with a honey syrup. The creative cocktail menu from beverage director Rob Krueger includes the Melon of Troy with vodka, cantaloupe, tarragon and dill, and for oenophiles, there’s an extensive list from Amy Racine that spans the world but focuses on Mediterranean varietals.

Fraser says that opening IRIS has been both a personal dream and a professional adventure for “The food, the wines, the cocktails, and my team all serve as such an inspiration, and I couldn’t be more excited to be where we are as a restaurant right now,” he says. “Of all the neighborhoods I’ve had restaurants in, Midtown has surprised me the most. “It’s the heart of the city and seems to be getting back to its usual, bustling self.”

Let’s all make a toast to that.