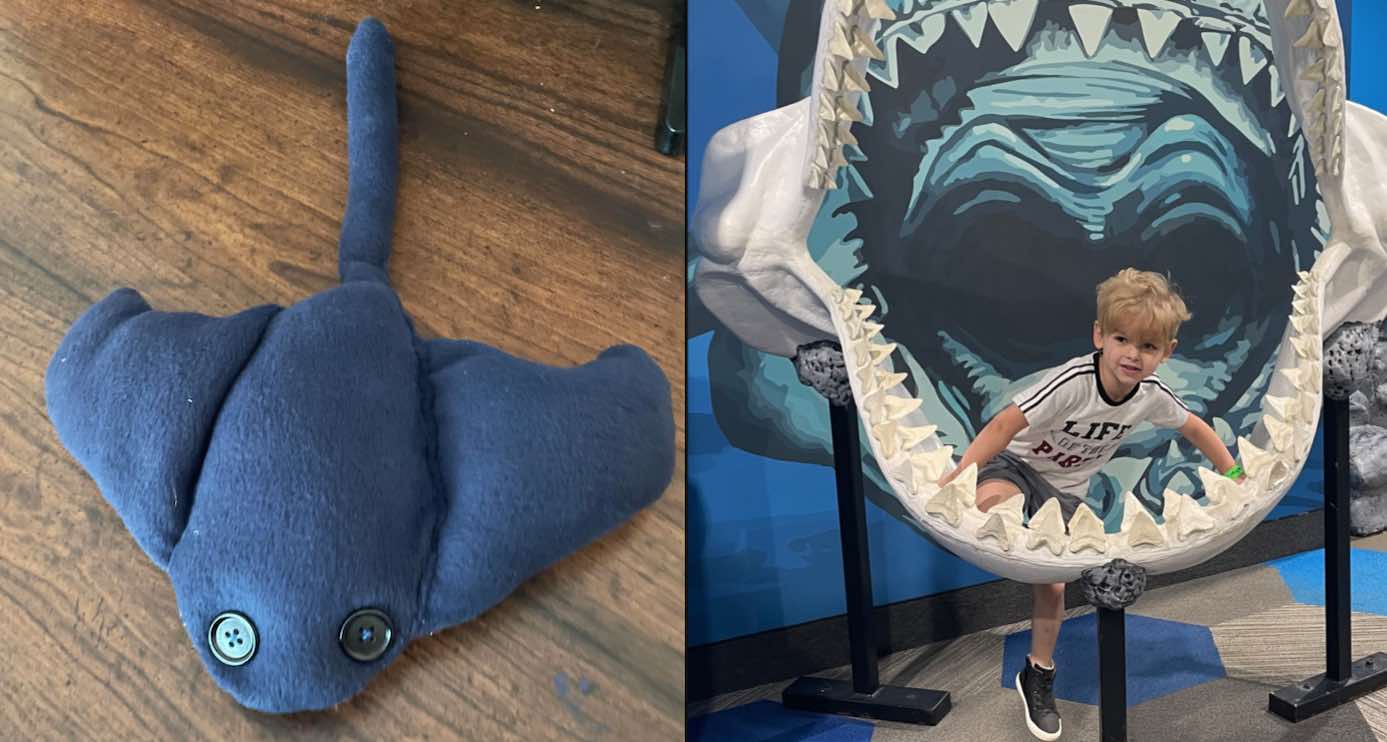 An ocean of kindness has swept over a loving mom and her son after strangers learned about her ingenuity in the face of poverty—and it inspired a whole community.

Tiffany Holloway wrote a post on Reddit about how her son wanted a stuffed manta ray for his 5th birthday. She couldn’t afford to buy one so she crafted one—and made it out of his old baby blanket.

The photo of the blue ray with button eyes became the No.1 post on Reddit (the largest online forum in the world) and soon hundreds of readers were sending Jason toy manta rays, squids, and other plush ocean creatures.

But the fun didn’t stop there for the Oklahoma tot and his siblings.

One Redditor, who wants to remain anonymous, contacted the Blue Zoo and had them hold a $100 gift card for the family, which they used for admission, so that Jonas— whose hero is Steve Irwin—could see and touch some real sting rays.

Jennifer Prokop (username YarntYouSweet) bought Tiffany and her four boys tickets to the Oklahoma City Zoo, as well as four tickets to feed the sting rays.

“Jonas got to see and touch and even feed his favorite animal,” Tiffany told GNN. “Jennifer and I have become fast friends. She is an amazing kind person with a big heart.”

They stayed alongside the pool for over an hour, even as most guests moved on after a few minutes. “The boys loved it.”

“My son’s favorite part of all this is having a bunch of sea friends to cuddle with at night. He has so many stuffed sea animals there is barely any room for him on his bed but he insists on sleeping with all of them.”

“Me and my son are domestic violence survivors, and Jonas is a child that rarely smiles because of all the trauma he’s been through,” she said in an email.

“This outpouring of love and kindness has brought an oh-so-rare smile to his face—and that is worth more to me than anything else.”

“It was a reminder for me that even when we are struggling and feel alone there are good people in the world who will offer you support and compassion when you need it the most.”

POPULAR: Remarkable 10-Year-old Inspires the World to Donate Half a Million Books For Kids

A GoFundMe campaign was started by their new friend, Jennifer, to accept donations to the family.

With a big media spotlight turning on—the Ellen show called and the Washington Post is publishing a story tomorrow—Tiffany wants to highlight the Manta Trust conservation group, which rescues and rehabilitates the graceful sea creatures.

The group lets the public “adopt” a ray and then sends a packet in the mail to donors about their chosen manta.

DON’T Let This Story of Kindness Float Away, Without Sharing on Social Media!