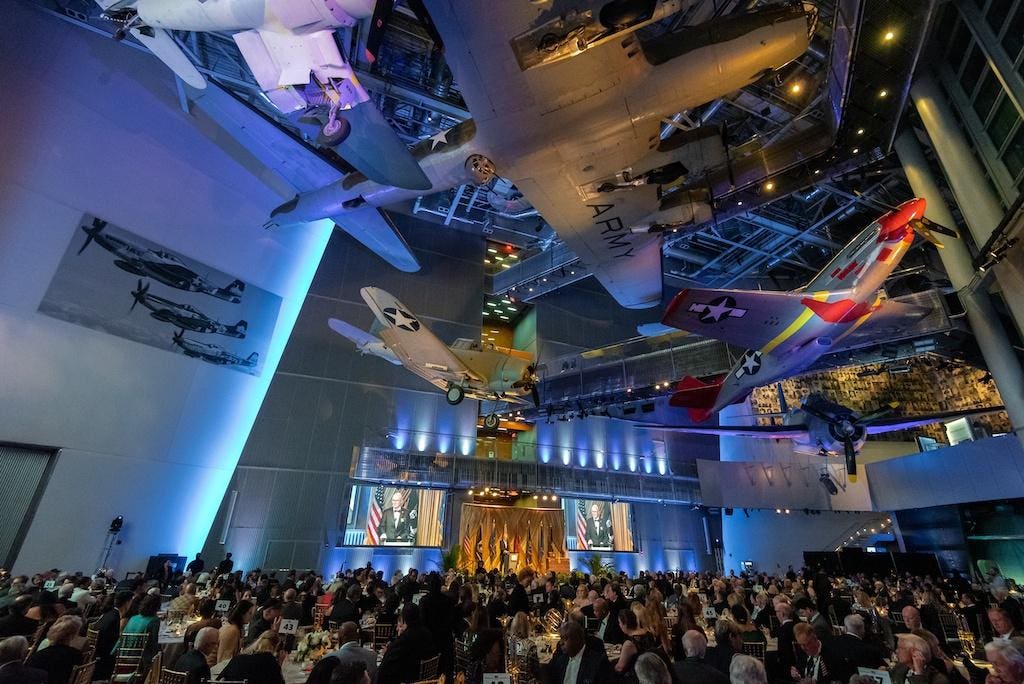 In timing with Veterans Day 2022, The National WWII Museum in New Orleans introduced a new show telling how Americans responded both on the battlefield and the Home Front.

“Expressions of America,” the museum’s newest attraction, applies special effects and cutting edge technology to present the real-life words and stories of everyday people during the war years. The presentation is described as immersing visitors into the thoughts and feelings that various Americans experienced within that time period.

“ ‘Expressions of America’ has been more than five years in the making, and we are thrilled to finally be able to share this groundbreaking project with museum visitors,” stated Stephen J. Watson, the museum’s president and CEO, in a media release.

“Expressions of America” uses projection mapping technology — which transforms architectural objects through movement and light — to project living murals up to 90 feet tall on the facades of the museum’s buildings surrounding the Col. Battle Barksdale Parade Ground.

The presentation also features an original musical score performed by New Orleans musicians, including members of the Preservation Hall Jazz Band. Its premiere happened in conjunction with the museum’s Veterans Day weekend celebration. It will be a permanent offering.

The show uses source material from the museum’s collection — letters written during the war and oral histories — to tell how soldiers, nurses, chaplains, factory workers, entertainers and supportive loved ones on the Home Front banded together. Learn more about them here.

“With ‘Expressions of America,’ we are introducing viewers to the stories of World War II in a completely new way,” stated Kimberly Guise, the museum’s senior curator and director for curatorial affairs, via a media release. “The script is shaped by letters from a wide range of individuals, helping to present a diverse portrait of American life from a time when the outcome of the war was uncertain.”

Medici Media (formerly known as Mousetrappe), a leading designer and producer of media-based shows and experiences, partnered in developing “Expressions of America.” The company collaborated with Solomon Group — an entertainment design and production firm — on the technical design.

“Expressions of America” is scheduled to run three to four times per week; show times and dates will vary seasonally. For more information or tickets, visit expressionsofamerica.org.