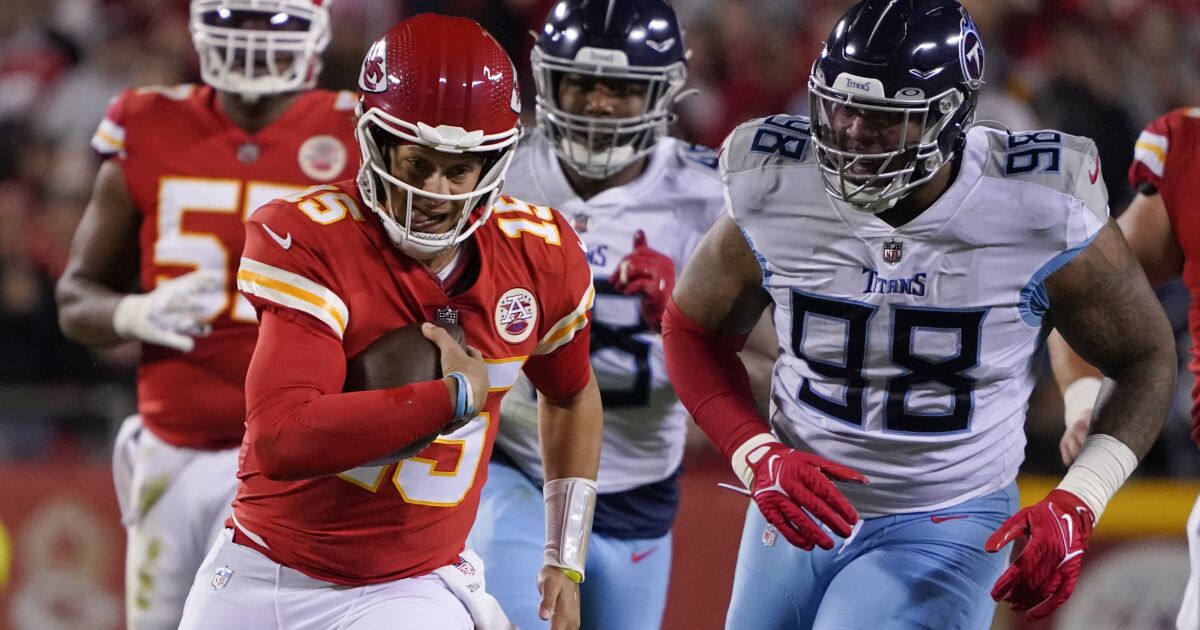 “Sunday Night Football” was the top-ranked prime-time program for the ninth time in the nine weeks of the 2022 NFL season. The Kansas City Chiefs’ 20-17 overtime victory over the Tennessee Titans averaged 17.687 million viewers, seventh among the season’s “Sunday Night Football” telecasts airing between Oct. 31 and Sunday.

According to live-plus-same-day figures released by Nielsen Tuesday, World Series viewership was the third-lowest on record, essentially unchanged from a year ago but 19.7% more than 2020’s record low.

All the 2022 World Series games drew the largest audiences of their nights. The only prime-time programs with larger audiences since the World Series began Oct. 28 were two “Sunday Night Football” games on NBC and their pregame shows.

Because of scheduling, a rainout and Houston’s series-clinching victory in Game 6 Saturday, none of the World Series games aired opposite an NFL game on nationwide broadcast or cable. The “Thursday Night Football” game between the Philadelphia Eagles and Houston Texans, which averaged 7.86 million viewers, was carried on the Prime Video streaming service (outside the teams’ markets).

Thursday’s Game 5 had the biggest audience of the World Series to place third among prime-time programs, averaging 12.769 million viewers. The World Series has aired on Fox since 2000.

CBS’ “60 Minutes” led all non-sports program for the seventh time in the 7-week-old 2022-23 prime-time television season, averaging a season-high 10.676 million viewers, eighth for the week behind “Sunday Night Football,” its pre-kickoff show, four World Series games and the third segment of NBC’s “Football Night in America.”

The CBS newsmagazine followed a 34-minute runover of the network’s afternoon NFL coverage into prime time in the Eastern and Central time zones, where the bulk of the nation’s population lives. The runover averaged 24.12 million viewers. It is not considered a separate program but is included in the network’s weekly average.

The CBS comedy “Young Sheldon” was the top-rated entertainment program for the second consecutive week, averaging 6.887 million viewers, 12th for the week and second among non-sports programs.

CBS’ “Fire Country” was the most popular new series for the third time in the five weeks it has aired, averaging 5.53 million viewers, 20th for the week and 10th among non-sports programs.

The only premiere on the five major English-language broadcast networks, the NBC comedy “Lopez vs. Lopez,” averaged 2.663 million viewers, third in its 8-8:30 p.m. Friday time slot, 64th for the week and 42nd among non-sports programs.

The World Series helped keep Fox at the top of the network rankings for the second consecutive week, averaging 8.31 million viewers.

The CW averaged 480,000 viewers. Its biggest draw was the magic competition series “Penn & Teller: Fool Us,” which averaged 809,000 viewers, 126th among broadcast programs. Its overall ranking was not available.

Fox’s coverage of Saturday afternoon’s MLS Cup drew the largest audience for the event since 2018, with LAFC’s penalty-kick shootout victory over the Philadelphia Union averaging 1.487 million viewers, its most since 2018 when Atlanta United’s 2-0 victory over the Portland Timbers, also on Fox, averaged 1.571 million.

“Enola Holmes 2” was Netflix’s most-streamed film, with viewers spending 64.08 million hours watching the mystery in its first three days of release, according to figures released by the streaming service.

“Manifest” was Netflix’s most popular series, with viewers watching the first 10 episodes of the supernatural drama’s fourth season for 57.06 million hours the first three days they were available.