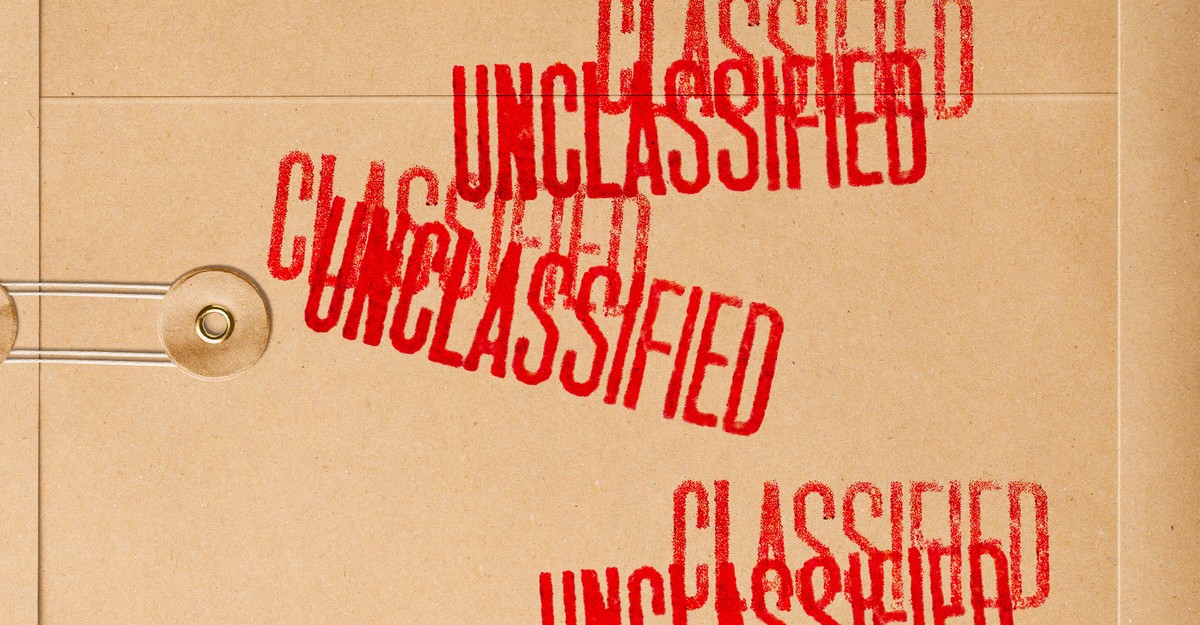 The executive branch’s system of classification is among the weirdest aspects of the American government, and sometimes it seems as if those best equipped to understand it are people with a background in obscure religious practices—say, Roman Catholic sacramental theology—rather than journalists or lawyers. Certain officials are consecrated as having “original classification authority” (they can baptize documents as classified without reference to previous classification); others are ordained to classify, too, but derive their authority from others. You can be defrocked for various reasons. But the authority to classify and declassify flows from one person with near-absolute power, and for four years that papal figure was Donald J. Trump. That awesome former power will protect him from prosecution, but only so much.

Attorney General Merrick Garland revealed yesterday that the FBI’s search of Mar-a-Lago concerned the existence of classified material at Trump’s Florida golf resort. And The Washington Post reported that the material included “documents relating to nuclear weapons,” which would seem to surpass in gravity the pilfering of presidential memorabilia that many speculated was the reason for the raid. If Trump took away a postcard from Kim Jong-un, well, tsk-tsk. Political prudence might dictate that Garland not prosecute the case.

Moreover, so much material is classified that one should expect a slip-up here and there. For decades, the crusade against overclassification has been a cause mostly of the left, in part on the grounds that so much is secret that no one, let alone Trump, could be expected to abide by all classification rules. Secrets are not rare. By some measures there might be more information that is classified by the U.S. government than is unclassified, in any library, anywhere. In 2004, the physicist Peter Galison tallied the amount of classified material produced every year and found that “about five times as many pages are being added to the classified universe than are being brought to the storehouses of human learning, including all the books and journals on any subject in any language collected in the largest repositories on the planet.” The government certainly has more classified data than exists unclassified in the entire Library of Congress. Mistakes will be made, especially by officials who are flagrantly heedless of basic procedure.

But fan letters and snapshots are one matter, and launch codes are another—and here the details of classification might decide just how much trouble Trump is in. First, let’s focus on the absolute portion of near-absolute power. The 1988 Supreme Court case Navy v. Egan confirmed that classification authority flows from the president except in specific instances separated from his powers by law. And here is where things get theological: a president can make most documents classified or declassified simply by willing them so. This peculiar power is so great that the government has an office that exists solely to manage it: the Information Security Oversight Office (ISOO), which has a strong claim to being the coolest government office you’ve never heard of. (The longest-serving director of this office, Steven Garfinkel, told me that for two decades he had access to pretty much every secret in the Executive Branch. “If there was a version of the game-show Jeopardy! entirely about the federal government,” he deadpanned to me once, “I would be in the Tournament of Champions every single year.” Garfinkel retired to teach high school in 2002 and died in 2018.)

His successor, J. William Leonard, led ISOO under George W. Bush, and he confirmed the lack of general limitation of his boss’s power. While a president is president, Leonard told me, “the rules and procedures governing the classification and declassification of information apply to everyone else.” And that means Trump could have declassified whatever he wished (again, with specific limitations soon to be discussed) before carting it off to Mar-a-Lago. He would not have had to file paperwork—just “utter the magic words,” Leonard told me. He could have waved his hand over the U-Haul trailer as it headed out the White House driveway and down I-95 toward Florida, and there would have been no classified material in there to mishandle.

Leonard noted important caveats, however. First, his power to declassify ends with his presidency. Second, that U-Haul could be re-classified by someone else. (Depending on traffic and the sharpness of the Biden administration, I would imagine it could have been reclassified somewhere around Fredericksburg, Va.) And third, there are certain materials that presidents cannot classify and declassify at will. One such category of material is the identity of spies.

Another is nuclear secrets. The Atomic Energy Acts of 1946 and 1954 produced an even stranger category of classified knowledge: anything related to the production or use of nuclear weapons and nuclear power is inherently classified, and Trump could utter whatever words he pleased, and still be in possession of classified material. Where are our nuclear warheads? What tricks have we developed to make sure they work? This information is “born secret” no matter who produces it. The restrictions on documents of this type are incredibly tight. In the unlikely event that Trump came up with a new way to enrich uranium, and scribbled it on a cocktail napkin poolside at Mar-a-Lago early this year, that napkin would instantly have become a classified document subject to various controls and procedures, and possibly illegal for the former president to possess. Of course if he did so, no prosecutor would pursue him. A certain amount of leeway is critical to the system.

If Trump was keeping nuclear secrets in the storeroom of his country club, without even the benefit of a padlock, and resisted attempts to secure those secrets against infiltrators and spies, a prosecutor might reasonably take more interest. After all, he’s the ex-President, not the pope.