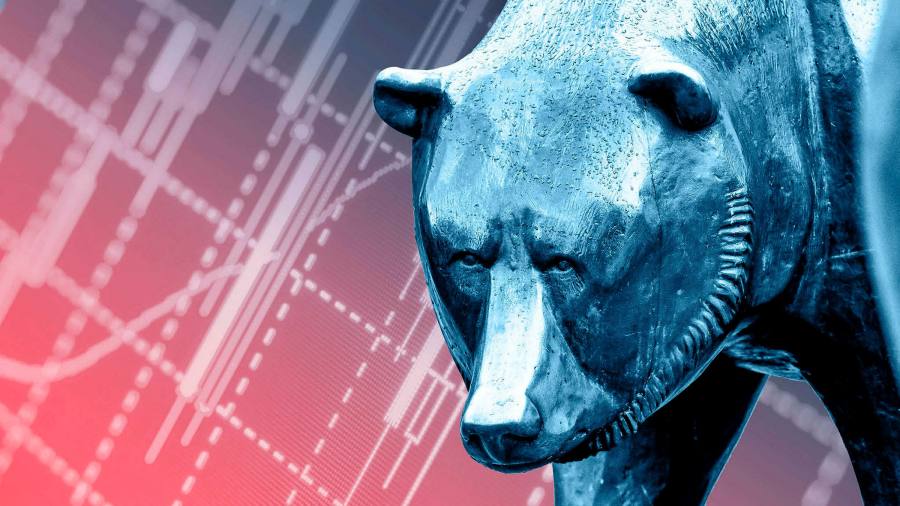 Good morning. Yesterday, Rob landed in London just in time to hear that UK inflation there had hit 9 per cent. This turned out to be the best news of the day. Soon thereafter, markets descended into the worst session since the grim early weeks of the pandemic.

A few days ago we wrote this:

In the midst of the equity rout, a group of consumer staples companies — the very staple-est of them — [is] holding up well. Food companies make up the core of that group. Campbell Soup, for example, is up 8 per cent in a month. Canned soup! Part of the reason the packed-food group is interesting now is that it has underperformed the index massively for years.

A few days later, we wrote about mega-cap staples companies such as Walmart and Procter & Gamble, noting that while their valuations are similar to the big tech companies, their steady growth could be relatively attractive in a slowdown, as could their low volatility.

Ah, well, yes, um, about that. Walmart is down 18 per cent in the last two days, after it issued weak profit guidance. Its peer Target fell 25 per cent yesterday, for a similar reason. Here is what the packaged food group did on Wednesday (from our FactSet terminal):

Smucker, down 10 per cent yesterday, makes fruit preserves, for goodness sake. We are, apparently, past the “overvalued, unprofitable tech companies sell off” stage of this drawdown.

The brutality of Wednesday’s selling may be new, but the theme is becoming familiar. We have, for a week or two, been pricing in not just inflation but recession, and — here’s the new bit — a recession in which every sort of company feels the pain. You can see growth fears overtaking inflation fears in the fact that five-year break-evens (an unreliable inflation predictor, admittedly, but at least a timely one) have fallen 25 basis points over two weeks. Another sign: bond yields all fell yesterday.

Yesterday was chaotic. There is only so much to be gained from immediate close analysis. It is too early to tell, for example, if we have arrived at capitulation and therefore a buying opportunity. So instead we take a step back and look at some of the underlying themes in this ugly market. Email us: robert.armstrong@ft.com and ethan.wu@ft.com.

If you want to understand the fear that pervades markets now, you have to look at the dollar.

A year ago, when inflation was a mere 4 per cent and the Fed was still making dovish noises, we wrote about how everyone on Wall Street seemed to be bearish on the dollar. In those prelapsarian days, the worries were not rampant inflation but the US current account and budget deficits, both of which had driven higher by pandemic-era fiscal and monetary largesse. A weaker dollar, we wrote, was a natural offset to the pressures those twin deficits create.

Much higher prices and a suddenly alert Fed have changed all that. As Mohamed El-Erian wrote in the FT this week, the Fed tightening faster than other developed market central banks, the relative outperformance of the US economy and the role of US financial markets as a safe haven in a time of stress have all combined to push the dollar relentlessly upward.

As we have noted before, the first thing this makes people worry about is emerging markets. Many of them have some combination of dependence on dollar-denominated food and energy imports and dollar-denominated debt. El-Erian summed up the point in a pithy phrase: a very strong dollar lights “little fires everywhere” in the emerging world, fires that can combine, grow and then blow back on developed world financial markets.

But emerging market blowback is not the only way a strong dollar creates economic stress — because it is not only emerging economies that have dollar-denominated debt. There is $13tn in dollar-denominated, non-bank corporate and sovereign debt held by non-US issuers, according to the Bank for International Settlements. Less than a third of that sum is in emerging countries. An excellent 2018 paper from BIS economists, “The dollar exchange rate as a global risk factor,” describes the effects this has (hat tip to Ian Harnett of ASR for sending the paper along).

The key point is that a stronger dollar limits the availability of credit, because it affects both borrowers’ capacity to borrow and banks willingness to lend.

When the dollar depreciates and the local currency appreciates, “a borrower who had borrowed in dollars to finance domestic real assets would see a strengthening of their balance sheet”. At the same time, “a weaker dollar flatters the balance sheet of dollar borrowers, whose liabilities fall relative to assets. From the standpoint of creditors, the stronger credit position . . . creates spare capacity for additional credit extension.”

The opposite happens when the dollar strengthens. The availability of credit declines, reducing real investment and therefore growth.

As you sit at your desk watching the dollar appreciate, you are also watching global liquidity decline — watching the amount of money sloshing around the global economy fall. And as we have argued before, less sloshing usually means lower asset prices.

Looking for an end to the brutal sell-offs? You may have to wait for a weaker dollar.

Crypto was one of the first risk assets to get hit hard, but not the last. Rising rates, scarcer liquidity and bad sentiment take no prisoners. In fact, the crypto sell-off has looked a lot like the fall in tech stocks:

But the crypto bear market is not just a story of falling valuations. Entire projects are falling apart. Last week the “algorithmic stablecoin” TerraUSD — which tries to peg one token to one US dollar through a complex arbitrage system — went from $25bn to essentially zero. Tether, the asset-backed stablecoin underpinning many crypto trades, briefly broke the buck, fuelling $7bn in outflows. This week, another algorithmic stablecoin called DEI lost its dollar link, too.

What’s next? It’s a question I’ve been asking while reporting for next week’s edition of FintechFT (you should subscribe). The most common answer from people in the industry: it’s time to build! Unencumbered by bull-market mania but still flush with venture capital, crypto firms are doubling down on product development. One crypto founder told me:

From a blockchain development perspective, the narrative in a bear market is, “Thank f**k, we can build!” . . . The whole space quiets down, everything reorganises and it’s actually an opportunity for further sustained growth.

This is a little too cute: crypto boosters who have used bull markets as an ATM now say bear markets are a sort of juice cleanse. Meanwhile, regular investors lured in by celebrity endorsements are getting crushed.

But there could be a sliver of truth here. Crypto adoption could mimic internet adoption — or for that matter, railroad adoption more than a century ago. Both involved phases of consolidation and bankruptcy. Mark Cuban wrote on Twitter recently that crypto “is going through the lull that the internet went through”. Every blockchain firm worth its salt wanted to ride the wave of hyped products such as non-fungible tokens. Crypto’s most promising practical application — “smart contracts” which let two parties ink deals that computers then execute — got ignored. Here is Cuban:

What we have not seen is the use of Smart Contracts to improve business productivity and profitability. That will have to be the next driver. When business can use Smart Contracts to gain a competitive advantage, they will. The [block]chains that realise this will survive. The chains that copy what everyone else has, will fail.

Such a pivot — from crypto as a fun toy to crypto as an enterprise service — would require a big transformation. Speculation remains the most popular crypto use case, often cross-subsidising other projects. A crypto industry no longer reliant on demand from punters will look very different.

Perhaps tighter money and diminished retail investor presence will help clear the brush, refocusing crypto developers on building socially useful services. The industry certainly has enough talent and capital to try. But crypto’s full maturation, if it comes, still looks distant, and plenty of money will be lost along the way. (Ethan Wu)

An interactive demo of what wartime media looks like to your average Russian, from The Economist.

Swamp Notes — Expert insight on the intersection of money and power in US politics. Sign up here