Archibald Prize-winning artist Craig Ruddy, who won acclaim for powerful paintings of prominent Indigenous Australians such as legendary actor David Gulpilil and Olympic gold medallist Cathy Freeman, has died aged 53.
Byron Shire mayor Michael Lyon said the artist had died “as a result of complications from COVID-19” after Ruddy’s social media accounts on Wednesday announced his death the night before.

“Too young to leave us and such a beautiful, kind and generous soul, am still in complete shock.”

His social media accounts asked fans to remember the Northern New South Wales man as he “always wanted to be remembered” and said the following week would be devoted to loving his long-term partner, Roberto Mezo Mont.

“It is with the heaviest of tender hearts we let you know that last night Craig left his body peacefully at home in Robertos arms,” the message reads.

“We have lost the most divine human that gave so much to our communities, the creativity, the inspiration, the pure love and plenty of dance.”

The message of mourning also shared a quote from Ruddy.

“I love the spontaneity of life and the open freedom of spirit and mind that brings souls together,” he was quoted as having said.

“Relationship, touch, companionship. Union in love and friendship that carries new life that transcends all.”

Ruddy was inspired to paint Gulpilil in “bold, free-spirited” charcoal and graphite on “colonial English wallpaper” in part due to the actor’s existence across “two contrasting worlds”. 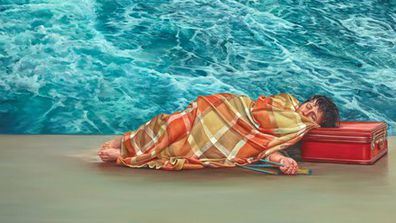 “One is an infinite world of spiritual connection with the land and universe as a whole, and the other a materialistic conformation of western civilisation,” Ruddy once said.

“Simplicities and complexities infiltrate both worlds and David seems to strike a balance.”

In an October 2021 profile by the Northern Rivers Review, Ruddy described suffering from a rare lung condition as a child.

“My lungs would haemorrhage, leaving me anaemic and short of breath,” he said.

“It slowed me down and put me into a strange euphoric state. As a result I learnt to sit and observe.”

It’s unclear if that condition followed him into adulthood.

Ruddy has also featured in the Archibald Prize with portraits of Freeman, author Bruce Pascoe and acclaimed Aboriginal director Warwick Thornton, for which he won the People’s Choice award in 2010.