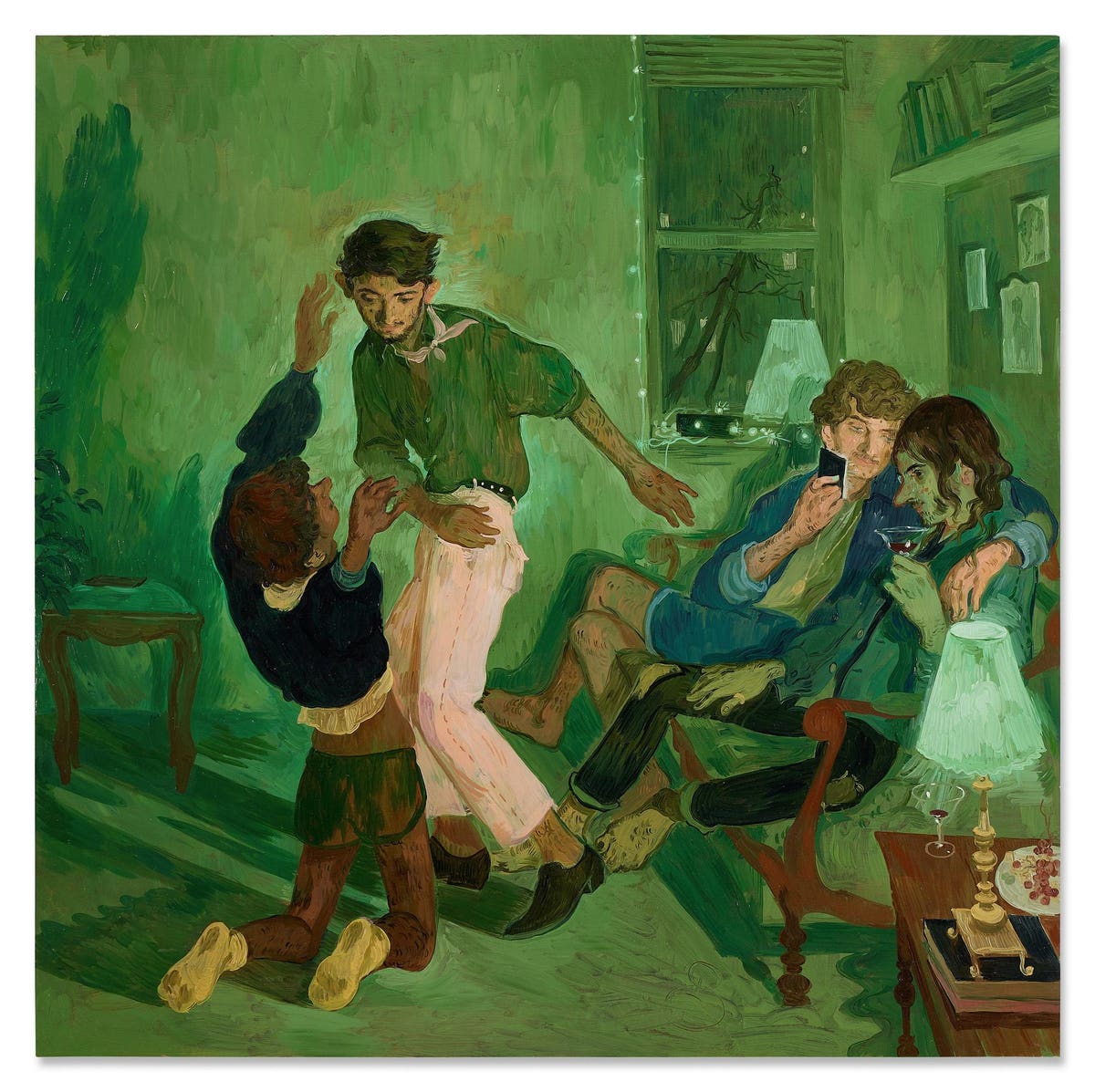 Salman Toor (born in 1983) has had a meteoric rise to his short career that many contemporary artists dream of. The Pakistani-born painter from Lahore burst onto the art scene, culminating in the November 16 sale at Sotheby’s of Four Friends, estimated at a high of $400,000 but confirmed at a price of $1.2 million at The Now Evening Auction.

This is a record for Toor, solidifying his place in the Western canon among a slew of other seminal contemporary artists. Toor’s representation of queer male figures as icons of a rarely seen South Asian gay community is significant, especially as one that lives both in joy and in fear. Now the images have been celebrated among other revolutionary moments, such as Black Lives Matter, and now works by spot painter Yayoi Kusama, the haunting faces of Yoshitomo Nara, Cecily Brown, Richard Prince, Damien Hirst and Gagosian darling Anna Weyant.

To Elliott, the inclusion of a queer artist and subject matter is a turning point, a significant shift in market response response to diverse and living artists.

“[Four Friends] was the key painting in Toor’s widely acclaimed solo exhibition at the Whitney Museum of American art in 2020-2021, and like the best of his work, it highlights an intimate moment in the life of young queer men in New York. Toor is among the most sought-after and acclaimed artists working today, and we were delighted to offer his work as a star lot of The Now Evening Auction.”

Aligned with the “queer intelligentsia,” Toor’s work eschews Muslim stereotypes in favor of “Queer Rococo,” a blend of Old Master and contemporary camp.

He was previously represented by Aicon Gallery, and is now at Luhring Augustine. After his November 2020, solo show called ‘How Will I Know’ at the Whitney Museum in New York City, a play on the Whitney Houston lyric, he sold his first painting at auction, Rooftop Ghost Party I (2015) at Christie’s for $822,000, then Liberty Porcelain (2012) sold for approximately $500,000 in London. Toor broke his own sales record that summer with Girl with Driver (2013), which sold for $890,000 at Phillips in Hong Kong.

Whether Toor will maintain record-breaking sales remains to be seen, but the ratio of boom to steady increase seems promising.

“While our most recent sale marked a new benchmark for the artist, the result was not an anomaly,” Elliott wrote. “…Toor has a clear auction track record, and Four Friends is among the best works by ever to appear on the market—so it was no surprise it set a new record for the artist.”

He confirmed that there is believed to be a very low risk of an overheating market. Ultimately, the auction specialists remain confident about his longevity, and that his collector base will only continue to grow.