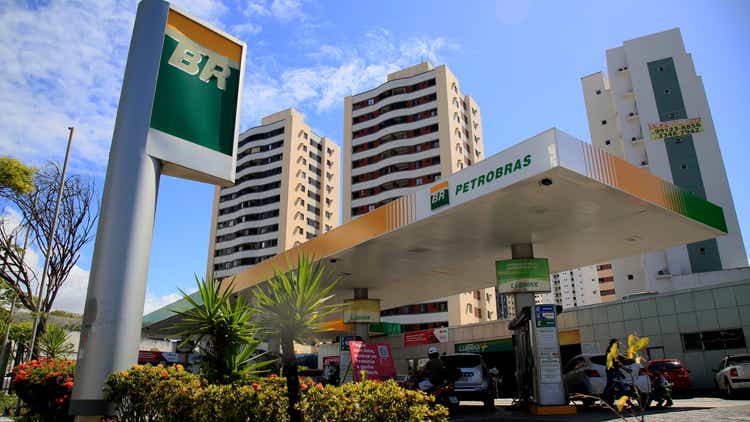 In my last bullish article from the end of September, a little before the election, I argued that the fears are exaggerated and that there are currently political risks in the oil sector worldwide. From the actual visible facts, one has to say the company is in a better position than ever before. Now a bit of time has passed since the end of the election, and Petrobras’ (NYSE:PBR, NYSE:PBR.A) share price has plummeted since then. This leads to the current situation that the stock is more favorably valued than ever before, even compared to the darkest times in the money laundering scandal of 2014 and 2015. The margin of safety is very high. Free cash flow and dividends could collapse by 50%, and the stock would still be cheap.

Valuation during the car wash scandal – and now

I want to start the article with a bit of history and especially look at what happened to the share price during this scandal and what the valuation looked like at that time. Many readers have already heard of this scandal, so I will not describe it in too much detail. Anyone who wants to can read about it on the Wikipedia page. Here is an excerpt from the subheading “Effects on Petrobras.”

Petrobras delayed reporting its annual financial results for 2014, and in April 2015 released “audited financial statements” showing $2.1 billion in bribes and a total of almost $17 billion in write-downs due to graft and overvalued assets, which the company characterized as a “conservative” estimate. Had the report been delayed by another week, Petrobras bondholders would have had the right to demand early repayment. Petrobras also suspended dividend payments for 2015. Due in part to the impact of the scandal, as well as to its high debt burden and the low price of oil, Petrobras was also forced to cut capital expenditures and announced it would sell $13.7 billion in assets over the following two years.

Lula was president in his first term from 2003-2011. According to Fastgraphs, the P/OCF valuation in this period was between 2 and 13. I would say about 7 was the average.

According to Wikipedia, the first investigations into the scandal began in March 2014. In addition, there were also declining revenues in the following years. The lowest valuation between 2014 and 2017 that I could find was a P/OCF of 0.96. The average valuation was between 2.5 and 3.

And today? According to Fastgraphs, we are at a P/OCF valuation of 0.90. Is it justified that the valuation is lower than in the middle of the scandal? A period of falling revenues, uncertain prospects, and politicians going to jail. Because it must be said that nothing has happened yet, and the current sell-off is pricing in an absolute worst-case scenario.

Even returning to a historically still extremely cheap P/OCF valuation of 2 would result in an excellent return. According to estimates at Fastgraphs, the dividend will be cut by more than half next year and fall again in 2024. I don’t think anyone assumed that this year’s boom year of record dividends could last. But even a significant cut in the dividend would still be a hefty double-digit yield at the current share price.

Lula must also be aware that he is now under more observation than in his first term as president. He will certainly not want to go to prison again, and another scandal of this magnitude is unlikely. It is much more likely that the free cash flow will decrease because the company will have to invest more.

Again, however, the valuation is already incredibly cheap. According to Fastgraphs, we are currently at a P/FCF valuation of 1.04, and the historical average is 5.88. Even if we assume that only half would be fair due to higher risks (P/FCF of 3), the current free cash flow could still drop by 2/3 to reach a P/FCF of 3. So no matter from which side I look at it, I must use a lot of imagination to grasp the current valuation. The market is almost pricing in that the free cash flow will disappear completely.

Perhaps it would have made sense to sell before the election and then get back in. I have not done this because, simply too often, the markets react unexpectedly, and it was also not sure whether Lula would win. But it is not a good idea to sell now. In the last month, the stock has plummeted 32%, and as you can see from all the valuation methods, a very unlikely worst-case scenario is priced in. Any even remote return to historical averages should make the stock trade many times higher.

This is a quote from my previous article:

From my point of view, it seems that politicians worldwide are playing a blame game, where oil and gas companies are blamed for the fact that these same politicians have previously made bad decisions. Among other things, they have helped to make financing more difficult. The looming current oil shortage did not occur this year but has been slowly developing for a long time. Accordingly, prices were rising, as they always do in a market economy. What usually follows is that more is produced, so the price falls again. The cure to high prices is high prices.

In the meantime, a lot has happened again on this front. A global recession is becoming more and more likely. OPEC+ has announced to a reduction in its production by 2M b/d, and the price cap on Russian oil is still to be introduced. Overall, these market interventions are creating inefficient markets, longer routes for tankers, and diesel shortages are becoming more likely. Storage levels in the USA are historically low. Europe still gets a lot of its diesel from Russia, but at the same time announced that there will be an import ban (but before that, they buy as much as possible).

All in all, absurdities wherever you look. Brazil has enough oil but too little refinery capacity and therefore imports 30% of its diesel needs, mainly from the USA. I’m not sure that spending CapEx to increase refining capacity is terrible for the country and Petrobras in the long run. The company still has 13 refineries and has sold four so far. So nothing earth-shattering has happened here anyway. If this is a point of political intervention, I can even understand it a bit. Constant dependence on diesel imports when you have enough own oil is an avoidable risk, especially if the main exporter itself gets more and more into diesel shortage.

What are Lula’s plans?

As far as I know, nothing is certain yet. Some things I have read include increased investment in renewable energies. Or in other words, Petrobras should follow the path of Shell (SHEL) or Equinor (EQNR) (which I wrote about recently and think is an excellent buy), which would mean that some of the money earned would be invested in other projects like offshore wind farms.

Brazil already has one of the world’s cleanest power mixes thanks to its hydro fleet, but Lula wants more renewable investment. Brazil’s presidential frontrunner, Luiz Inacio Lula da Silva, wants to recast state-run Petrobras’ role in the country’s energy transition, giving it a much sharper focus on investment in renewable energy that will allow it to catch up with European and Latin American companies’ decarbonization strategies.

In addition, there are reports that Lula plans to change top positions to realize his company’s ideas. But this change also needs a little time. The earliest date for a CEO change would be January 1, but his term runs until April 2023.

Investments in renewable energy, refineries, job creation and regional economic development of the kind that made Petrobras an integrated energy behemoth during Lula’s presidency from 2003 to 2010.

To pull off that reboot of Petrobras strategy, Lula plans for sweeping turnover in the company’s first- and second-tier management ranks, said people familiar with his thinking.

How I proceed with the shares

These plans do not necessarily have to end disastrously for the company. Shell and Equinor continue to earn a lot of money and pay dividends. With the current oil and gas prices, these companies make a lot, so there is money also to invest. At least so far, the Brazilian government receives most of the dividends. Until I see the other hints, I think the most likely scenario is that there will be more of a mixed use of the profits in the future. A part will be distributed as dividends, and a portion will go into new investments. A stronger focus on renewable energy and maintaining or expanding the refineries are the biggest changes for Petrobras in the near future.

Given the uncertainties, I would sell if the valuation were close to or above the historical average. But at the current valuation, the margin of safety is so large that selling at this point would be a mistake in my view. I will buy a little bit more but not very much. However, this has personal portfolio reasons. I am already invested enough in Brazil and oil for my taste. After the last month’s selloff, the risk-reward ratio is very favorable.

A word about the difference between PBR and PBR.A, since some of you asked about it in the comments. The latter is the share without voting rights, therefore trading slightly cheaper or, in other words, with a slightly higher dividend yield, so I own this one.