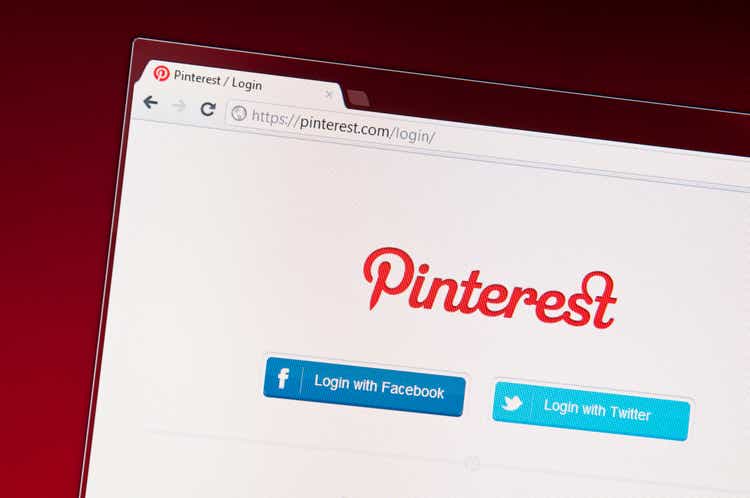 Pinterest, Inc. (PINS) was one of the high-flying social media stocks that leveraged the pandemic tailwinds as the stock rode to its all-time highs (ATH) in early 2021. However, those tailwinds that lifted its growth quickly turned into headwinds as the economy reopened. Consequently, the stock has also lost 70% of its value from its ATH, as investors turned their attention away from PINS.

Nevertheless, the company reported a reasonable FQ4 earnings card. Even though its monetization continues to look robust, its monthly active users (MAU) has continued to decline. However, the market chose to look past it this time, given its valuation.

But, we think its fundamental thesis could have changed given the ascendence of TikTok (BDNCE). While Pinterest is gearing itself up to compete in the short-format video, TikTok clearly holds the initiative now, as it further penetrates commerce in its app.

Pinterest’s MAU was Down, But ARPU was Up

Pinterest’s FQ4 results demonstrated that its growth has continued to slow as revenue grew just 20% YoY. Notably, its growth was 43% in the previous quarter. Nevertheless, its adjusted EBITDA remained robust at 41%, but its MAU has continued to decline, as seen above. Pinterest experienced the drop in its international and US segment, which the company has attributed to the reopening headwinds, and Google’s (GOOGL) (GOOG) algorithm changes. These changes had resulted in lower search traffic to Pinterest. Notably, the company clarified that it’s still making the necessary adjustments during the earnings call.

Nonetheless, its monetization engine continued to show resilience, as its ARPU in the US increased to $7.43 and $0.57 in its international segment. Therefore, it helped lift its global ARPU to $1.93, up 23% YoY and up 37% QoQ. Thus, Pinterest’s ARPU numbers also clearly reflected a deceleration compared to FQ3’s 37% growth rate.

But, the market didn’t send the stock tumbling despite its mixed earnings card. Therefore, it’s also a positive sign that its steep fall from grace could have accounted for the headwinds in its FQ4 card.

What About the TikTok Threat?

Pinterest has consistently marketed itself as a unique platform, unlike its social media peers, such as Meta Platforms (FB), Snap (SNAP), or Twitter (TWTR). It has positioned itself as the platform primarily designed for shopability and not for “eyeballs.” Consequently, Pinterest believes that it’s the key differentiator to drive e-commerce onto its platform and boost its monetization potential.

We think Pinterest’s monetization metrics speak for themselves, as its growth has decelerated. Moreover, management also alluded to competitive pressure without specifically referring to TikTok’s threat, as CEO Benjamin Silbermann explained (edited):

In Q4, we saw MAU decrease 6% YoY to 431M. This was primarily due to the continued unwinding of the pandemic, lower traffic coming from search, and increasing competition for user attention. I would argue that competition for kind of user attention and time right now is probably the most competitive industry in the world. So of course, TikTok we think about. We also think about Meta. We also think about Google. But we also really try to focus on what we can offer that’s differentiated. (Pinterest’s FQ4’21 earnings call)

Therefore, it’s clear that Pinterest also needs to compete for attention against its rivals. Unlike Amazon’s and Google’s search business, where consumers have a clear intention, Pinterest still needs to be discovered. We really like Pinterest’s underlying thesis previously. But, we believe that the recent developments over the past year have proved that its platform is not as “impervious” as we thought against intense competitive pressures. Moreover, Meta Platforms has also communicated the fundamental threat from TikTok as both an attention and commerce platform. Investors need to be clear about the incredible momentum that TikTok has been making. Thus, it would be critical not to rule out its threat to Pinterest’s e-commerce thesis and its monetization capability.

Pinterest has already communicated that its revenue will be expected to slow as it focuses on short-form video. It’s becoming increasingly clear that Snap and TikTok are continuing to lead in this space, given Snap’s robust results seen recently. We aren’t sure whether Pinterest can execute effectively while monetizing at a lower rate. The short-form video is where TikTok has clear leadership, and its top-notch creators are unlikely to move over to Pinterest, where the platform is entirely different. If it were so simple to execute TikTok’s strategy, we would have heard it from Meta Platforms. Pinterest will now need to compete against Instagram Reels, Snap Spotlight, YouTube Shorts, and of course, TikTok. We can’t say for sure that Pinterest is clearly differentiated now. Because all these platforms also have an e-commerce strategy. Moreover, Pinterest has also emphasized competitive pressures for attention, as mentioned earlier.

Furthermore, TikTok has accumulated a massive installed base of over 1B users. Therefore, TikTok is intensifying its mission to entrench itself in the short-format video space to drive commerce as part of its “Shoppertainment” strategy. If you don’t think it sounds like or even better than Pinterest, read on, as TikTok emphasized (edited):

TikTok has become so well known for helping brands and products take off that it’s often covered in the news. In fact, many eCommerce apps and retailers ride on #TikTokMadeMeBuyIt themed campaigns to recommend products to shoppers when browsing their app or physical store. As people become less satisfied with much of the advertising they see online, they’re looking for ad experiences that are genuinely entertaining, especially when it comes to commerce. In fact, 1 in 3 consumers want commerce to be more entertaining. This all points to the need for a new way for brands and consumers to interact. And this unmet opportunity lies in the intersection of entertainment and commerce, what we call Shoppertainment. TikTok, the driving force of entertainment, has now propelled itself to the forefront of commerce with Shoppertainment. (TikTok)

There’s no doubt that the valuations of Pinterest stock and its peers have been slashed, as seen above. As a result, Pinterest stock is trading well below its 2Y mean of 12x. But, Pinterest was also growing much faster over the last two years. Moving forward, management guided FQ1 revenue to increase “in the high teens” YoY. Consensus estimates point to an increase of 18.3% YoY in FQ1 and 21.8% YoY for FY22. However, management also guided “non-GAAP operating expenses to grow around 40% year-over-year,” as it invests in improving its creator and content ecosystem and headcount increase. Therefore, Pinterest’s top line and profitability are expected to take a hit concurrently.

Moreover, PINS stock’s price action has also turned decisively bearish as it seeks a bottom. Given its current valuation, it’s feasible that the stock might find a potential bottom soon. Usually, it would have presented an excellent entry point for PINS stock. But, we think the stakes have changed with the ascendence of TikTok that we have not considered much previously. TikTok will likely continue to compete for users and advertising dollars aggressively.

Furthermore, Pinterest’s strategy has been reactive, as we think management might not have accurately anticipated the threat from TikTok, similar to Meta. In contrast, Snap has positioned itself much better to deal with TikTok’s encroachments than its rivals. Thus, we think the fundamental thesis to Pinterest has changed. And if we believe its thesis has changed, its attractive valuation would not matter as much.

Thus, we will give some time for management to prove its execution first. As such, we revise our rating on Pinterest stock from Buy to Hold for now.