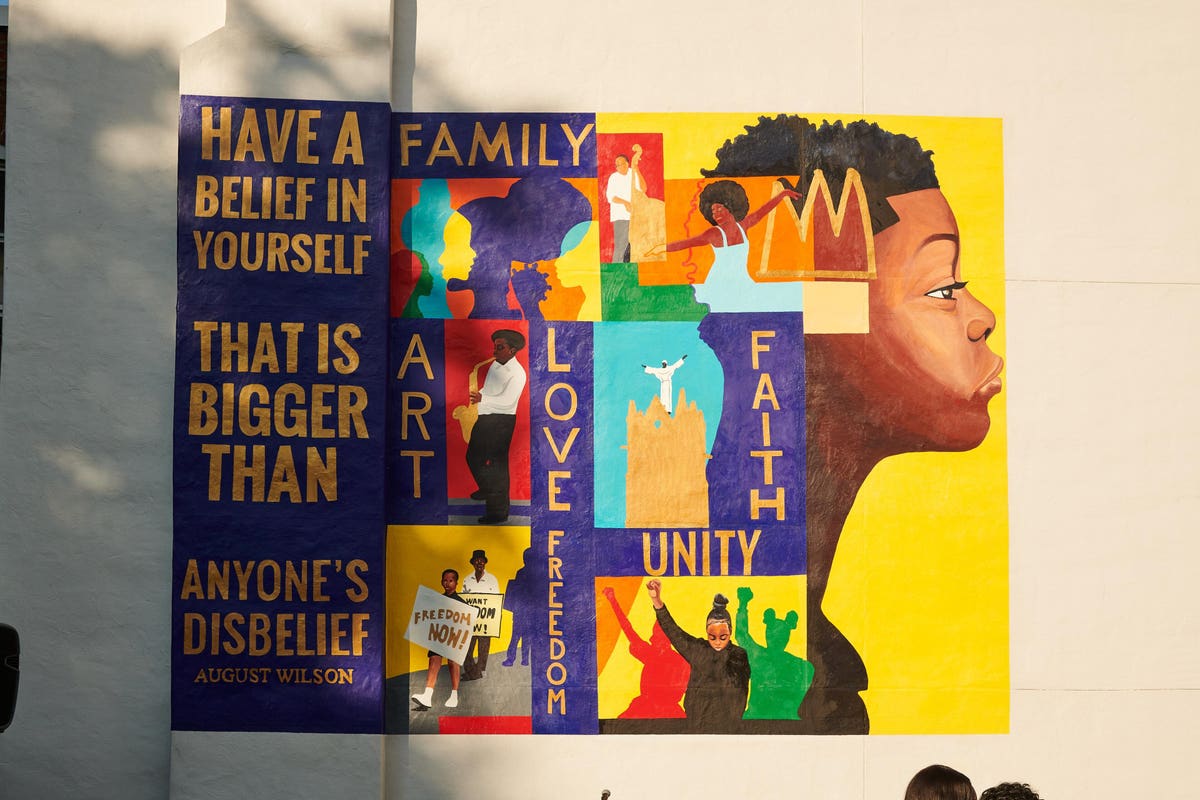 The Carnegie International in Pittsburg dates back to 1896. Historically organized every three to five years, it is the longest-running North American exhibition of international art.

None of them have a more remarkable story than James “Yaya” Hough (b. 1974, Pittsburgh). None of them overcame longer odds to see their work featured here. None of them served 27 years in state prison like Hough did.

“Young person, 17-years-old, in these streets, no direction like some youth I encounter today, really lost, not understanding that there is a path and there is a future for you, however, if you have no way to get on that path, or if you don’t have any support to get on that path, it’s very easy to get lost and make those terrible mistakes that impact the lives of someone else, their family, your family, your community and society–that was me,” Hough told Forbes.com of the circumstances leading to his conviction for criminal homicide as a juvenile. “Fortunately for me by the grace of god and by the grace and assistance of many, many wonderful people, many institutions, friends, mentors, peers, I was fortunate to be able to find my way back and try to recover and turn around my life and make it something respectable, to make it something to help people, heal people as opposed to something that harmed.”

Early in his incarceration, Hough met the director of Mural Arts Philadelphia, the nation’s largest public arts program. One of the organization’s core program areas is restorative justice which it describes as, “an alternative to traditional means of rehabilitation and punishment which brings together returning citizens and community members, focusing on conversation and understanding as the first steps on the path to healing.”

Following that conversation, Hough saw a path “to contribute to the betterment of the institution and community.”

His life was about to change, a transformation that over the course of almost 30 years would take him from a state prison to the Carnegie International.

“Unfortunately for me and a bunch of other men who were serving sentences for things that we terribly regret, our goal was, ‘how do we use what we’re capable of doing; how do we use those skills to contribute something back,’” Hough said.

Hough would spend 23 of his 27 years behind bars making public art inside and outside the prison walls.

“It’s like a cool breeze in hell,” Hough explained of art and art making inside prison. “Many officers, they started like, ‘what the hell is this, this is not an art studio, this is a prison.’ Over time, when they saw the very, very, very real rehabilitative potential and effect of the art, not just on the persons creating it, but the persons who were experiencing it as well–we used to invite as many members of the population to paint with us–seeing the change, I’m under no illusion that art can change all the social problems that we have, but what I’m aware of is that art is a key component that is necessary in the lives of people, especially those who need a change, who need a shift, who need something very powerful and positive to connect to to get their bearings, those therapeutic effects to me are very real.”

Look no further than the artist himself as proof.

“I feel best about using my art capabilities to give something back to the society from which I took something from,” Hough said. “I also saw a tremendous personal transformation in that process because it wasn’t just art making for art making’s sake, there was a lot of personal development, there was a lot of conversation, a lot of engagement, a community being formed which enhanced the artwork and also enhanced the people creating it.”

Upon his release in 2019, as part of a program supported by the Art for Justice Fund and Fair and Just Prosecution, Hough was selected to be the inaugural artist-in-residence at the Office of the District Attorney of Philadelphia. His work was included in “Marking Time: Art in the Age of Mass Incarceration,” which was on view at the Museum of Modern Art in New York’s PS1 satellite exhibition space.

“I was gobsmacked,” Hough said of his reaction upon being asked to participate in this 58th Carnegie International in his hometown.

He’s particularly excited to be included in this edition because for the first time, the International has been coordinated by a person of color: Sohrab Mohebbi.

That fact and Hough’s inclusion are not unrelated. Entire new worlds of artmaking and creativity are opened to consideration when the power of decision making enters the hands of those who’ve been denied it.

The International, which runs through April 2, 2023, brings together new commissions, existing works, and projects by established and emerging artists working internationally, domestically, and locally. The exhibition transforms galleries and public spaces inside the Carnegie Museum of Art and occupies sites in various Pittsburgh neighborhoods. Taking the International to the streets was one of Mohebbi’s major objectives.

Headlining this outreach is Hough’s, A Gift to the Hill District, mural sited in Pittsburgh’s historic Hill District, the cultural and artistic hub where the artist was born. It’s his first public commission in his hometown.

Additionally, selection of Hough’s drawings and works on paper addressing topics of authority, confinement, oppression and racial and political violence in the United States will be presented in the museum galleries during the International.

“I used to say the pain really happens on the inside, what we see on the outside is a reflection of that, the real art is taking place on the inside,” Hough said.

A Gift to the Hill District

Emblazoned on Hough’s mural is a quote from famed Pittsburgh Pulitzer Prize winning playwright August Wilson (1945–2005): “Have a belief in yourself that is bigger than anyone’s disbelief.”

Like Hough, Wilson was born in the Hill District. He would go on to become the first African American to have a Broadway theatre named in his honor. The August Wilson African American Cultural Center has been a pillar of the Pittsburgh community since opening in 2009. New to the neighborhood, The August Wilson House opened earlier this summer. His restored childhood home now serves an arts center while also being a destination for resources related to Wilson’s life and work.

Hough’s A Gift to the Hill District mural was dedicated during a public ceremony on July 30.

“I view it through complete humility that I was selected and asked to participate and people believed in me enough to supply me with the resources, the time, the assistance and the trust to execute my vision and do it in a way where I was able to involve the community,” Hough said of his prominent inclusion in the Carnegie International. “It firmly grounds me in the purpose and the power of public art.”