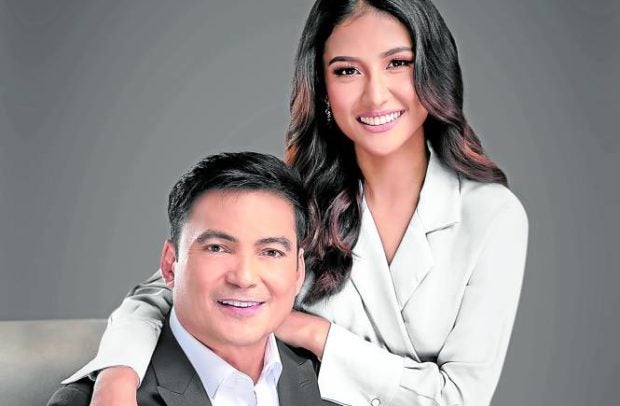 For Sanya Lopez, her “First Yaya” character, Melody’s, transition from being a nanny to becoming the President’s wife in “First Lady,” presents a much bigger challenge to her as an actress.

“When Melody was a yaya, the character was closer to my real-life personality. But playing the First Lady was something I really had to study. I underwent workshops. I watched shows [with similar themes] and looked for things that can help me and that I can apply in my portrayal,” she said in a recent virtual conference for “First Lady,” which airs weeknights on GMA 7 starting Feb. 14.

With Melody’s rise in status comes bigger responsibilities. “I truly felt the challenge this time around,” the 25-year-old star said. “Before we began taping, I made sure to ask the [creative team] and my coactors for advice. I said, ‘Melody’s responsibilities are more serious now. She’s not just a wife or a mother [to the President’s children]—she’s a mother to a nation,” she related.

The romantic comedy series’ success last year helped solidify Sanya’s place as one of GMA 7’s top young talents. “Personally, I feel like nothing has really changed. Ganun pa rin. If there are any changes, they’re more about self-improvement, as an actress, as a worker,” she said.

“First Yaya” ended on a happy note with Melody and President Glenn Acosta’s (Gabby Concepcion) fairytale romance leading to marriage. This time, “First Lady” will show the newlywed couple navigating a new territory in their relationship, which will test their trust for each other. And as Glenn seeks another term, Melody must find her place in her husband’s chaotic life.

The concept of the series’ second book proved to be just as challenging for the creatives, who had to seek the help of experts to make sure that the story and Melody’s character development are faithful to what actually happens in real life.

“In ‘First Yaya,’ we could rely on our instincts because it was more focused on romance. But now we want to level up. We want the story to be based on facts. So we hired political consultants—one of whom was a mover in past elections; and another who was a member of the Presidential Management Staff,” concept creator Jojo Nones said.

“We conducted intensive interviews, researched about the constitution, election laws. We also had a lawyer on board to answer our questions,” he said, adding that the scripts had to be checked by the consultants to make sure.

“There were times when we were told that we had to change the script, because it had scenes that will never happen in real life, or things a First Lady would never do,” Nones said. “It was a tedious process … but we’re happy that things fell into place.”

But despite the challenges, director LA Madrilejos said exploring Melody’s motivations was still an enjoyable process. “We ask ourselves how Melody will deal with being in a box [of being a First Lady]… How she will balance her desire to become a good First Lady while staying the same person Glenn fell in love with,” she said. While a lot of work went into creating Melody’s character, a big part of the story will also focus on President Acosta’s personal life—particularly, his relationship with his ex-girlfriend, political strategist Ingrid Domingo, who gets unwittingly hired by his campaign team to head his presidential bid.

“We never imagined that there would be a second book. The first one was very good. I recall reading the storyline—no scripts yet—and I already knew that it could lead to something good. I just found it interesting to play a President who develops a romantic relationship with his household staff. That’s something I haven’t seen yet,” Gabby said.

Meanwhile, asked if his portrayal of President Acosta was inspired by an actual President or any politician Gabby said he didn’t have to rely on pegs. “What the show wants to show, anyway, are the things that go on behind scenes, behind the campaign and the scripts … what goes on in their households and personal lives,” he pointed out.

“I didn’t have any pegs because we don’t really see how they are in their homes. I had to come up with my own interpretation,” the actor added. INQ