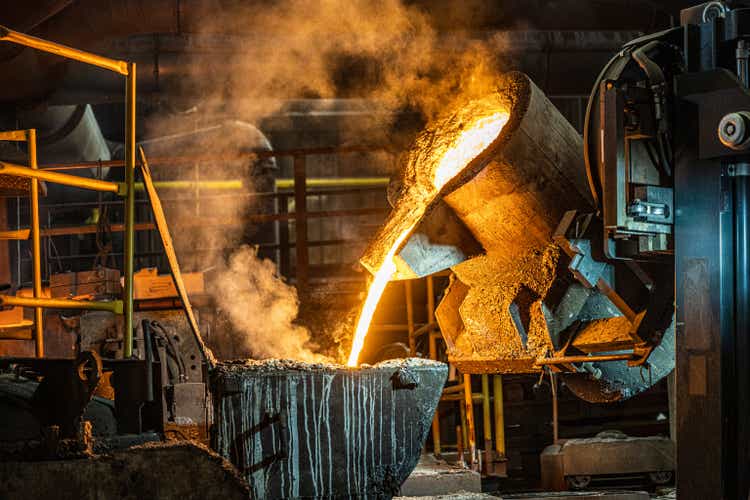 We initiated a “HOLD” rating for POSCO Holdings (NYSE:PKX) on September 1st, due to macroeconomic and labor-related headwinds. Since then POSCO Holdings has performed considerably well, returning 7.32% since our publication, which far outpaced S&P 500’s decline of -4.78% during that same time frame. Despite that, we believe the aforementioned headwinds are still relevant, but we see increased headwinds from a slowdown in the economy as well as demand for steel. Given the uncertain macroeconomic picture, we reiterate our “HOLD” rating as of this time.

POSCO Holdings reported a drop in operating profit by 71% on a YoY basis, as management cited price drops and losses arising from flooding in September. However, the company was able to report a marginal YoY increase in its top line and the company attributed this increase to price increases in some of its units. Nevertheless, the company’s profit margin even excluding the impact of the flood has been on a downward trend, as seen by a 10%+ increase in the cost of revenue on a YoY basis. The company’s management also provided expectations that demand will be “weak” in the “first half of next year” as a result of economic factors.

Since the time of our writing, the Korean Won has depreciated even further, currently trading at 1,360 KRW compared to the U.S. dollar. This metric is substantially down from ~1,430 KRW range just a month ago, and such deterioration confirms our view that there’s currency risk in the stock. The weakening won will translate to higher input costs (raw materials) as well as higher labor costs due to the inflation. Though a weaker currency would then favor exports, as we will get to below, we believe that the company will also see headwinds in the global demand of its finished steel products. As a result, we believe higher input costs as a result of a weakening currency and inflationary pressures domestically will lead to compressed margins and impact the company’s prospects.

Due to Federal Reserve interest rate hikes, the global economy is starting to show signs of slowing down. As economy activity slows down, we are beginning to see signs of reduced demand for steel. For example, in a recent survey, majority of respondents had a bearish outlook for finished steel prices, with 87.1% forecasting a price decline in the month of November. Demand for raw ores has also been declining as a result of China’s economic woes, and according to a report, producers are still hesitant to constrict supply which will weigh on steel prices. Other economic indicators like housing construction are all pointing downwards, and thus, we believe the poor macroeconomic environment will translate to major demand headwinds for POSCO which will worsen the company’s financial prospects given the higher input costs on KRW denominated terms.

Therefore, we still recommend a “HOLD” on POSCO Holdings. POSCO has had a subpar quarter of performance, and many economic indicators point to a worsening environment for POSCO’s operations. In addition, the risks that we discussed in our previous coverage are all still pertinent, with some risks like currency risk becoming materially worse since our last writing. We will re-assess this stock as new economic data comes to light or some of its risks that we identified are alleviated.