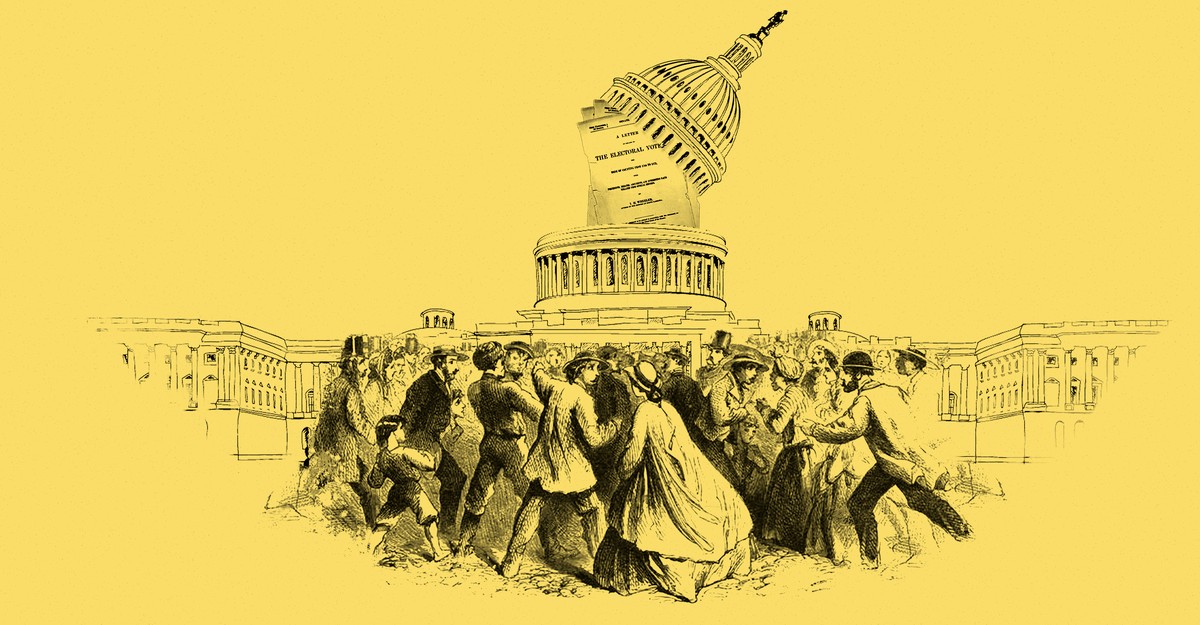 Preventing the next attempt to overturn an election is a bit like playing whack-a-mole. Plug one gap in the nation’s rickety, interlocking system for counting votes—say, by ensuring that a power-hungry vice president cannot unilaterally declare his or her ticket the winner—and another pest seems to materialize immediately.

Congress is confronting this reality as it tries to rewrite a 135-year-old law governing the final, fraught act of certifying the Electoral College results—the very statute that former President Donald Trump used as a pretext to demand that then–Vice President Mike Pence anoint him the victor on January 6, 2021. Last month, a bipartisan group of senators announced, to substantial fanfare, that it had reached an agreement to revise the 1887 Electoral Count Act. But closing off every path to subversion is proving to be a tricky task.

The legislation is modest in scope; its aims are not. The proposal’s authors believe that its enactment is necessary to guarantee that the violent insurrection that occurred last time around does not become a quadrennial affair. “That happened. It was real. It was not a visit from friends back home,” Democratic Senator Joe Manchin of West Virginia, Congress’s most famous centrist and a co-sponsor of the bill, testified Wednesday at a hearing on the measure. “And we have a duty to ensure that it never happens again.”

Election-law experts across both parties agree that the Senate proposal, known as the Electoral Count Reform Act, would resolve legal ambiguities that Trump and his allies tried to exploit before the transfer of power. As written, the bill would clarify that the vice president, regardless of party, has only a ministerial role in presiding over Congress’s certification of the Electoral College vote. The proposal would also make it harder for members of Congress to raise objections to a state’s electors; doing so would require support of at least one-fifth of the members in each chamber, rather than just one in both the House and the Senate, as it stands now. Another provision seeks to head off rogue state legislatures by ensuring that they respect the outcome of their popular vote as determined by the laws that were in place at the time of the election.

Read: Kamala Harris might have to stop the steal

The proposed changes “set us on a path to reform that represents an extraordinary bipartisan achievement,” Bob Bauer, a longtime Democratic election lawyer who served as White House counsel in the Obama administration, told the Senate Rules Committee. “The proposals before the committee represent a vast improvement over existing law. There can be no question about that—none whatsoever.”

Actually, there were a few questions. Appearing on the same panel, another Democratic lawyer, Norm Eisen, conceded that the Electoral Count Reform Act marked “a significant step forward” in efforts to thwart another attempt to overturn the presidential election. But he warned that, as written, the proposal “could invite unwelcome manipulation.” Eisen highlighted a pair of provisions that he said could be exploited by governors trying to ignore or outright reject the popular vote in their state.

One would set a six-day window to challenge the certification of an election by a governor. The goal is to ensure that legal disputes are resolved in time for the Electoral College to meet in December and then for Congress to certify the results in January. But, Eisen pointed out, that time frame could actually play to the advantage of a governor who certified the wrong winner rather than the candidate who clearly won his or her state’s election. “It just doesn’t work,” he told the committee.

Another provision Eisen flagged would bar states from declaring a “failed election” while allowing them to change or extend their elections because of “extraordinary and catastrophic events.” The point is to give states some flexibility to alter elections for legitimate reasons, as in the case of a terrorist attack or a natural disaster; the attacks of September 11, 2001, for example, occurred on a pivotal election day as New Yorkers prepared to choose their next mayor. (New York City postponed its primary by two weeks.) The bill, however, doesn’t clearly define what constitutes “extraordinary and catastrophic events.” That, too, presents an opportunity for “mischief” by election-denying state officials, Eisen warned. What if a governor alleged, without evidence, rampant voter fraud and deemed that “an extraordinary event” that warranted a re-vote?

Eisen’s concerns are shared by another prominent Democratic election lawyer, Marc Elias, who successfully fought in court many of the challenges that Trump and other Republicans brought against the 2020 results. Part of their complaint is the bill’s narrow scope: In order to win Republican support for any changes to election law, Democrats had to jettison their much broader dreams of enacting stronger protections for voting rights and minimum federal standards for access to the polls.

But Eisen and Elias are also highlighting a potential flaw with the new proposal that may be impossible for Congress to fully rectify. For instance, the bill seeks to reduce the chances that the vice president, Congress, or a rogue secretary of state will mess around with or overturn election results. In doing so, however, the legislation grants more authority to governors to certify a state’s electors. What if the sitting governor is corrupt? As Eisen was testifying Wednesday, vote counters in Arizona were determining whether Republicans had nominated one of the nation’s most steadfast election conspiracy theorists, Kari Lake, as the state’s next governor. In Pennsylvania, the GOP has already given its nod to a Trump loyalist, Doug Mastriano, who marched to the Capitol on January 6.

The bill’s bipartisan support increases its chances of passage, and during the hearing, lawmakers in both parties seemed open to some revisions. “It’s a good start, but like every important bill, the initial version has some areas that need development,” Eisen, who served as a House counsel for the Democrats during Trump’s first impeachment, told me afterward. Some provisions, he said, “do pose risk if they are not fixed.”

Nine Republicans are already backing the legislation in the Senate, and Minority Leader Mitch McConnell has praised the effort, suggesting that the bill will have enough votes to overcome a filibuster if Democrats fall in line. Each party has reasons to vote for it. Democrats want to prevent Trump and his allies from trying again to overturn a defeat, while Republicans fear a scenario in which Vice President Kamala Harris plays a decisive role when presiding over Congress on January 6, 2025. Senator Shelley Moore Capito of West Virginia, a Republican, said there was “a sense of urgency” to act before the next presidential campaign begins. “My personal feeling is we need to button this up before the end of the year,” she said at the hearing.

Yet among Democrats, there remains some pause, as senators recognize a need to adopt a compromise while lamenting the new bill’s limitations. “The text didn’t exploit itself,” Senator Alex Padilla, a Democrat of California, said at one point during the hearing, referring to the flaws in the 1887 Electoral Count Act. “People did. The former president did. Senators, members of Congress did.”

Congress is fond of loopholes—closing them, opening them, preserving them. And even the strongest defenders of the Electoral Count Reform Act acknowledged that the proposal was not entirely free of them. “No law can prevent all mischief,” Derek Muller, a professor at the University of Iowa, told me. The question lawmakers must answer in the coming months is whether this new attempt to fortify America’s elections stops more mischief than it inspires.