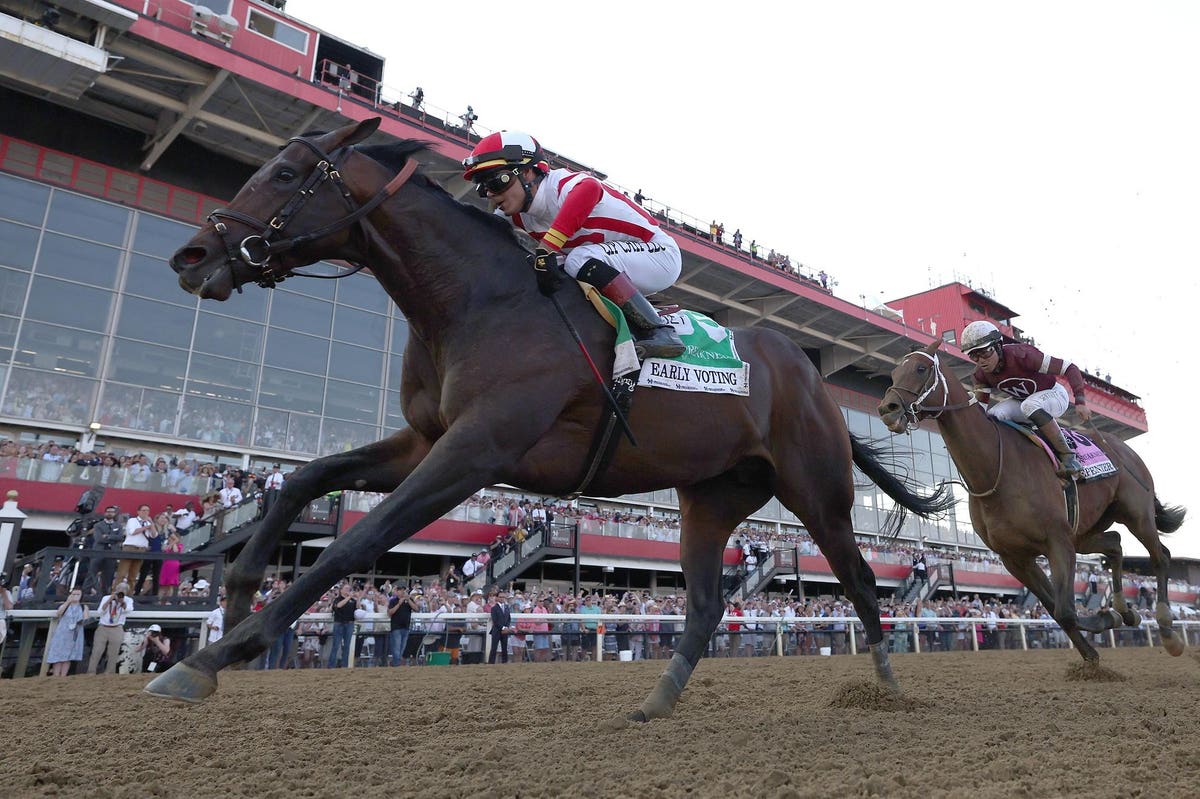 Race days can distill the focus on what we might call the race-within-the-race, or at least help us identify more clearly how the specific abilities of the top contenders might play out, but the $1.25-million 2022 Travers Stakes is defying that in its own special way. Despite the relatively clear morning line placing Epicenter, Cyberknife and Artorius up in estimation, with what’s shaping up to be an intense six-way fight in this race there’s not much of a “race-within-the-race” to be had.

Boiled down, the 2022 Kentucky Derby and Preakness winners have a solid shot at being shut out of the money. That doesn’t happen a lot. It’s as if they’ve been orphaned suddenly. Quite a lot of non-risk-averse players are building their more articulated tickets on that prospect. Nevertheless: If Rich Strike and Early Voting somehow don’t hit the board, that only signals where the fun begins. There’s still the raging war to be fought and to be handicapped between the other four superbly talented athletes, namely, Zandon, Cyberknife, Artorius, and the colt standing lowest in the morning line, Epicenter. Handicapping the 2022 Travers is like panning for gold — you may luck into a nugget, or you may not.

Before we bring in our pal the Bluegrass Wise Man to help us divine our way through the maze, here’s the morning line. Note: We’ll refresh these with live odds throughout the day, as the race-day money starts to jabber.

Please welcome Bluegrass Wise Man ™ along with every bit of his grand Kentucky horse sense. Today, we’re going to need it.

Race day helps. So, my guess is you’re putting everything on Rich Strike.

Bluegrass Wise Man ™: Not exactly. Like pretty much everybody, I can’t ignore Epicenter, and I’ve always liked Cyberknife. I think Artorius is talented, but I also think he’s got some growing up to do, and like we talked about yesterday, he’s not gonna go off at the price he is now. The way this field is working, still haven’t decided whether I’m gonna leave him out or not. But it’s important that this colt’s never seen anything like this.

Nor have we, actually.

Bluegrass Wise Man ™: Nice field, right? But let’s look at a part of this picture that nobody’s talking about much. Early Voting. Who’s he got up? Well, Jose Ortiz. That’s very good for Early Voting, despite his questions, and bad for us, because you cannot ignore an Ortiz in the saddle. Jose has won $14 million and then some this year, hitting the board in 390 of his 789 races. He’s one of the best there is. His brother is the other best there is. Now, Ortiz has already won the Preakness on this horse, okay? This is why, if you’re thinking about tossing Early Voting out of the mix like I am, then you have to be careful, or maybe just resign yourself to being a lot worried, about the Ortiz factor. I’m saying Jose will know how to steer this horse to get the most out of him. He knows it in his bones.

So, are you saying hello again to Early Voting, or just working out your goodbye?

Bluegrass Wise Man ™: Ordinarily I’d say sayonara, but this field is more like a Breeders’ Cup field in that it has everybody all worked up. That’s to say I could give it a re-think up at the window. If I were standing at a window now, I don’t think I’d use Early Voting. But I wouldn’t rule out a nagging last-minute instinct to figure Jose into a ticket. He’s an Ortiz, and it’s always dangerous to count them out.

And then there’s Irad up on Artorius.

Bluegrass Wise Man ™: We’re damn lucky to have two Ortizes in the sport, aren’t we? The fact that Irad is in the mix today, as he would be in most big races, does, also, influence the thinking. That said, Artorius requires some hard-nosed handicapping. We’ll see what happens, but I’m having a hard time with him down as low as he is and Zandon hanging way above him in the morning line. Zandon’s faced Epicenter and came in behind behind him twice, running third in the Derby and placing in the Jim Dandy. As we chatted about yesterday, Artorius has never faced, or beaten, anybody like that.

Just for the hell of it, chop this thing up into some interior “match races.” Let’s say things work out and the two Ortiz brothers get into good position at the top of the stretch.

Bluegrass Wise Man ™: God help them both, although they’ve been there before. If I were a jock, I wouldn’t want to be facing either of them. Look, fine as this field is, it’s still going to be a horse race. To a large extent it’s going to be a jockey’s race, which means highly tactical. You’re going to see some excellent riding out there today, the best we got. You have the best jockeys in the country out there with the Ortizes. Prat, Geroux, and so forth. Prat really adds to Zandon’s chances, by the way, and that’s one reason we could see that reflected when the windows open. To your question, who’s in position at the top of the stretch or coming down the lane is going to be whoever has got the most horse collected under him. That will involve Epicenter, I think, because I think we know he has it in him. It can very well involved Cyberknife, and Zandon. One or both of the Ortizes can always be in the mix. I’m going to play it like that.