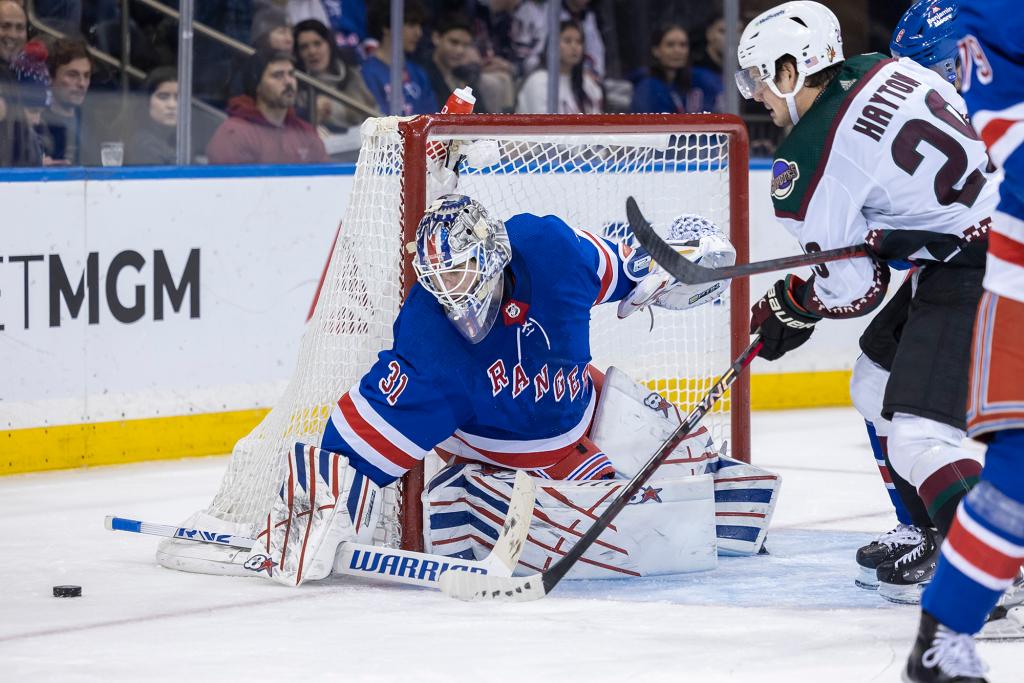 It may have taken a while to get to their game, but the Rangers cruised to victory once they did.

The Rangers snapped their three-game losing streak at home with a 4-1 win over the Coyotes on Sunday night at Madison Square Garden, emerging victorious from a game that took a while to get going with both teams playing on the second night of a back-to-back.

Fingerprints of the 2020-21 Rangers were all over this game. The severely lopsided shot totals in each period. Star goalie Igor Shesterkin bailing them out with little support. Sprinkle in a couple fortuitous bounces that the team was able to capitalize on at opportune times, a power play goal and there you have the Rangers’ first three months of last season in a nutshell.

As the Rangers learned last season, however, the aforementioned occurrences are not a reliable course of action to take over 82 games. These are habits the club cannot fall back into. It may have worked against the lowly Coyotes, who dropped to 6-8-1 on the season after their loss at the Garden, but it likely won’t against the upper-echelon teams in the NHL.

Shesterkin turned in one of his better performances of the season, stopping 31 of the Coyotes’ 32 shots and keeping the Rangers in the game when they could’ve fallen right out of it in the first period.

Arizona goalie Connor Ingram looked just as locked in as he was when the Rangers came to Mullett Arena at the end of October, until the end of the second period. Ingram poked the puck right to Barclay Goodrow in the slot, and the Rangers forward buried it to open the scoring with roughly five minutes left in the middle frame.

The goal breathed some life into the Rangers. Less than a minute and a half later, Adam Fox swept one in from between the circles as fans in the stands screamed at him to shoot the puck. And so he did to extend his point streak to six games, which matched the Sharks’ Erik Karlsson and the Sabres’ Rasmus Dahlin for the second-longest point streak by a defensemen so far this season.

Suddenly, the Rangers had a comfortable two-goal lead after struggling mightily to get anything going over most of the first two periods. And when Coyotes center Nick Bjugstad was called for tripping Kaapo Kakko less than three minutes into the third period — one of several penalties the Kid Line has drawn since they’ve been reunited — the Rangers’ power play broke through after going 0-for-5 the night before in Nashville, as Chris Kreider deflected a Mika Zibanejad one-timer past Ingram for the 3-0 Rangers lead.

The Coyotes’ lone goal came with Ryan Lindgren in the box for hooking at 6:50 of the third period, when Clayton Keller whipped the puck past Shesterkin. But Ryan Carpenter’s first goal as a Ranger, off a tip-in while battling in front, regained the three-goal lead for his team later in the period.

Both teams were competing on limited rest, but the Rangers looked particularly sluggish in the first period. In fact, they didn’t get their first shot on goal until more 12:30 in. The Ranges were ultimately outshot by an egregious 17-4 in the opening 20 minutes, which was likely a byproduct of coming off a two-city road trip.