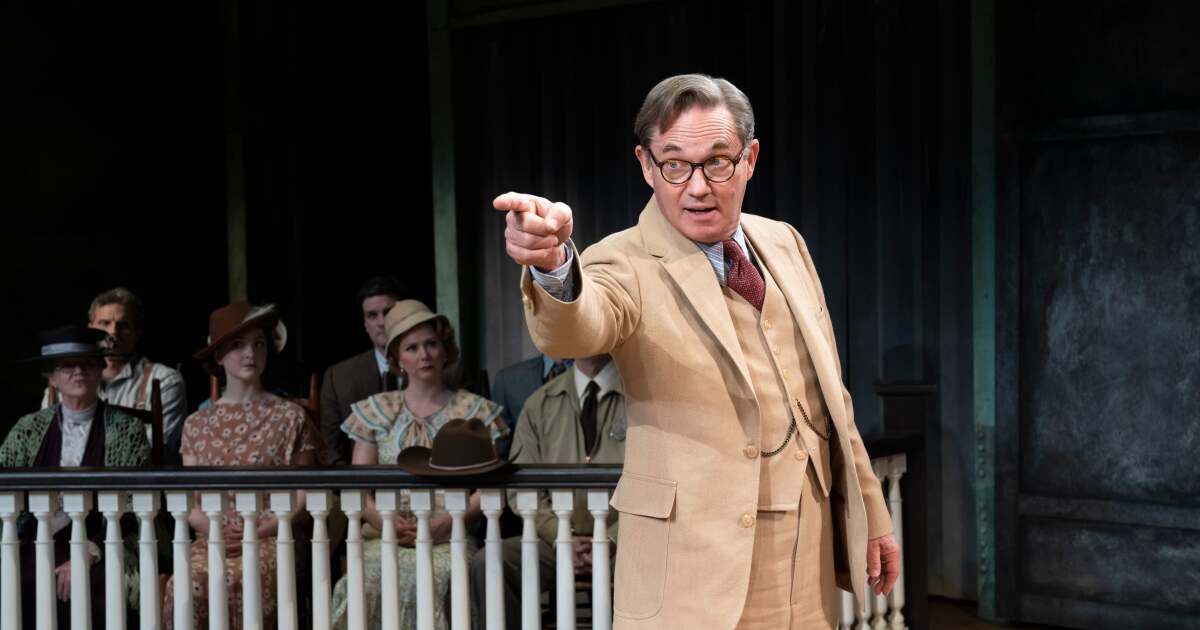 “To Kill a Mockingbird” published in 1960 in a country undergoing a profound racial reckoning. In February of that year, Black students staged a sit-in in the white-only section of a Woolworth’s lunch counter in North Carolina. Three years earlier, the Little Rock Nine had been blocked from entering an Arkansas high school. Five years before “Mockingbird,” Rosa Parks had refused to give up her seat on an Alabama bus, and Emmett Till was murdered after being accused of offending a white woman, a tragedy reflected in the court case at the center of Lee Harper’s novel.

The 1962 film adaptation of “To Kill a Mockingbird” starred Gregory Peck, who won an Oscar for his portrayal of the principled and steadfast attorney Atticus Finch. Undaunted by the book’s renown, Aaron Sorkin and director Bartlett Sher (a nine-time Tony nominee and a winner for “South Pacific”) undertook a stage adaptation in 2018 that broke sales records for an American play on Broadway and earned nine Tony nominations (and a win for featured actress Celia Keenan-Bolger). Jeff Daniels was nominated for his portrayal of Finch while Richard Thomas watched from afar, hoping to join the touring production.

Thomas got his wish. He is starring as Finch in the production that officially opens at the Hollywood Pantages tonight and runs through Nov. 27; the tour moves to Segerstrom Center for the Arts in Costa Mesa from Dec. 27 to Jan. 8.

The book presents Finch as a king figure, Thomas said — someone who does the right thing, is a good man, is trying to be a decent father, but doesn’t really change.

“This adaptation gives Atticus a story which interrogates all of those unassailable virtues,” Thomas said. “The novel is very much about the loss of innocence of these children. Aaron has made it also about Atticus’ loss of innocence. And that’s a beautiful thing for me, because icons are unplayable.”

In recent years, the character of Finch has been criticized as a white savior who stands up for African Americans as they look on from the gallery powerlessly. The new adaptation gives voice to Calpurnia, Finch’s housekeeper who helped to raise his kids, Scout and Jem. (Mary Badham, who stole scenes as Scout in the 1962 film, appears in the touring production.)

When asked about his attitude toward racist locals, Finch tells Calpurnia, “I believe in being respectful.” In response she asks, “No matter who you’re disrespecting by doing it?” Such passages are meant to inspire a shift in Finch’s deeply ingrained values.

“You have to maintain your ideals about the kind of person you’re going to be, and how you want to treat people. But you have to do it with your eyes open and you have to see how the world is made. Your ideals cannot trump the reality of what you’re dealing with,” Thomas said. “He’s a man under extraordinary circumstances who actually did try to do the right thing. We should applaud it, but we shouldn’t valorize it.”

‘To Kill a Mockingbird’

Thomas is the son of New York City Ballet dancers Richard Thomas and Barbara Fallis. He’s had his Actors’ Equity card since 1958, when he made his Broadway debut as a 7-year-old in “Sunrise at Campobello.” His first film, “Winning” in 1969, starred Paul Newman and Joanne Woodward as his parents. Familiar to contemporary audiences as Nathan Davis, father to Laura Linney’s character on “Ozark,” he laughs about playing her husband on Broadway five years ago in “The Little Foxes,” for which he received a Tony nod.

For those too young to remember, Thomas’ big break came with “The Waltons,” which he starred in from 1972 to 1977. He won an Emmy playing John-Boy Walton, a character that follows him to this day.

“When you first leave that show and you want to go and do other things, you can be impatient with that identification until you realize it’s not the audience’s job to turn on a dime. They’re entitled to feel about you and think about you any way they want,” Thomas said. “People come up to me all the time from countries all over the world, and it does nothing but make me happy.”

So, how does a child actor grow up to be so normal and stable?

“I would like to see a 50-year-old all of a sudden be given what these kids have earned, the entourage and money and power, and deal with it in a healthy way. I cut them a lot of slack,” he said of child actors who wind up in jail or rehab. “How does it not go to your head? I was 21 years old, the star of a hit television series, and I’m sure I was a huge pain in the ass.”

Posterior pest or not, he’s shown remarkable resilience and longevity, whether in the spotlight or the supporting cast.

“You go to work, do your work, respect your colleagues, and then you go home,” said Thomas, revealing his secret to normality in an abnormal industry. “I don’t know if I am normal. And if I am, I don’t know how that happened.”