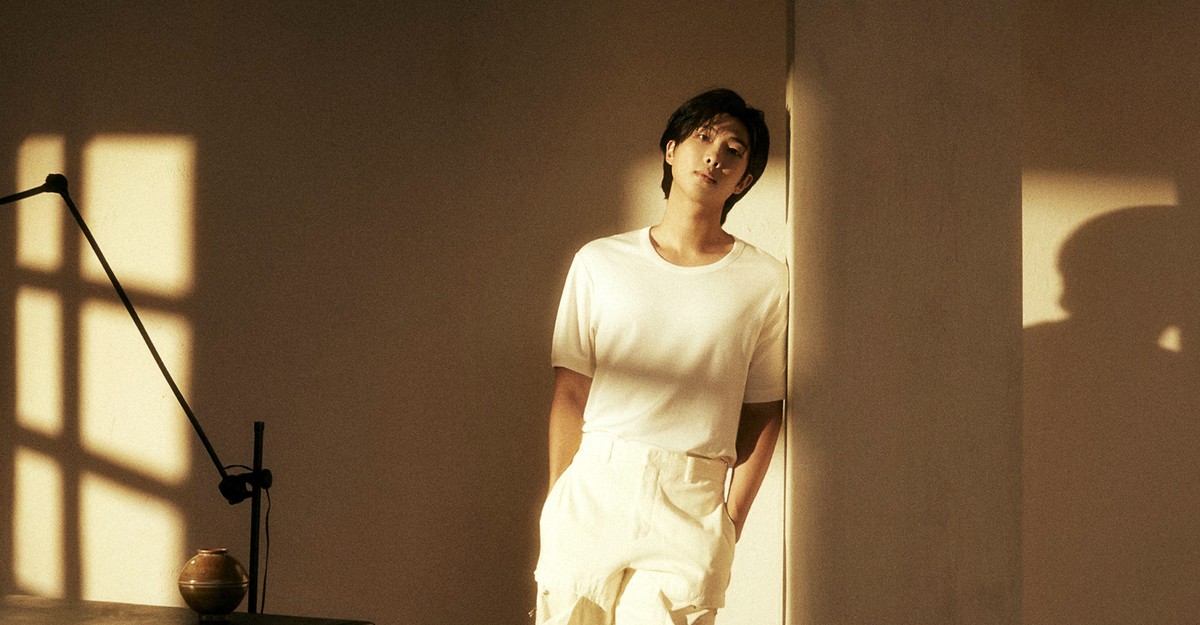 One year ago today, the leader of the world’s biggest pop group stood beneath bright lights and told more than 50,000 fans about his fears. Kim Namjoon, better known by his stage name RM, had guided his fellow BTS members through the vagaries of early-pandemic life—a canceled world tour, delayed music releases and life plans, illness. In an emotional speech during a Los Angeles concert last December, the then-27-year-old South Korean rapper confessed that he’d spent that time worrying about the future. What if their fans abandoned them? What if he lost his abilities as a performer? But, RM said, those concerns had melted away. “I promise that … I’ll be even better when I’m 30, 35, or 40,” he declared, to an eruption of cheers.

Some people might find this curious—a 20-something artist agonizing over his longevity. Since BTS debuted in 2013, though, RM has been highly conscious of the mark he’s wanted to leave on the music world. In addition to writing a sizable chunk of BTS’s discography, he’s put out two solo mixtapes—2015’s RM and 2018’s Mono—that define his style: cerebral, technically complex, introspective, defiant, wordplay heavy. His lyrics grapple with the nature of art, identity, fame, and love. As the group’s leader and only fluent English speaker, he is often at the forefront of their public appearances, whether in TV interviews and award shows or at the United Nations and the White House.

So it’s fitting that his first official solo album is a record that looks backwards. Today, RM released Indigo, which he calls “the last archive of my twenties.” The 10-track project is a musically omnivorous, profoundly collaborative effort that still feels like the work of an auteur—one who’s spent years refining his own sound and thematic obsessions. At its core, Indigo is a work of hip-hop, but RM infuses it with neo-soul, folk, R&B, electronic, and rock. So instinctive is RM’s tendency to work with others that eight tracks feature other artists (including Erykah Badu, Anderson .Paak, Kim Sawol, and Tablo). Listening to this album is like witnessing a person carve his name into the top of a mountain as a way of saying not just I was here, but also I’m glad you made it too.

When I spoke with RM on Zoom two weeks ago, he seemed nervous about Indigo’s impending release: “I just hope that time flies more quickly,” he told me. Yet a calm, earth-toned aura emanated from my screen. His hair was a natural deep-brown, and he wore dark-rimmed glasses and a loose-fitting olive shirt. I was reminded that, despite being a pop star, RM is drawn to slower, more contemplative forms of art and engagement. He’s an avid reader (and literary influencer), a nature lover, and a museum goer, all of which comes through clearly on Indigo. For instance, the album opener was inspired by the Korean painter Yun Hyong-keun, and the second track playfully extends the metaphor of a “still life” to talk about stagnation and momentum. For RM, Indigo is a way of “speaking silence”—essentially, expressing himself truthfully in a way that doesn’t cause chaos or confusion.

“As a star, or as a famous boy-band member … it’s really hard to be honest and frank,” he told me. “People sometimes misunderstand you. Like, ‘You said something really insensitive’ and ‘I hate you’ … Emphasizing silence is really hard, because you have a lot of platforms, like Instagram and Facebook and YouTube; people have their own minds but can still be easily manipulated by algorithms and articles and other people.” In this environment, he said, knowing when to talk and when to remain quiet is even more valuable.

Which explains why he hesitated to say too much about the meaning behind different songs. “These days, I’m thinking that empty space is really important to the audience … to digest the music on their own,” RM said. “So I don’t want to reveal too many intentions.” Because of that, we didn’t talk about why his first words on Indigo are “Fuck the trendsetter”; nor did we dig into his exploration of intimacy on “Closer” and solitude on “Lonely.” But I did ask about the gorgeous lead single, “Wild Flower,” which features the powerhouse vocals of Cho You-jeen, of the rock band Cherry Filter. (“For me, personally, she’s a No. 1 Korean rock star. She’s a legend.”) The song isn’t quite like anything RM has released before; an epic that swirls like a hurricane, it is sincere, pleading, and full of hard-won acceptance. The lyrics set up a memorable contrast between fireworks and what he calls “flowerworks”: The former burn out brilliantly and quickly, whereas flowers can exist humbly and peacefully for much longer.

RM has spent a long time—seven years, to be exact—thinking about this particular metaphor and its intriguing contradictions. He noted that fireworks can draw millions of people who want to witness their beauty for a 30-minute show. (I immediately thought of the displays that concluded many of BTS’s concerts.) The spectacle of “flowerworks,” though, is simpler and more anonymous. “I think of a field with tons of wildflowers that you don’t even know the names of. You just hold the flowers and throw them into the sky, and they come down so suddenly, maybe after five seconds,” he said, an edge of wonder in his voice. “I want to have a life like more of a wildflower.”

In some ways, you could think of his career thus far as a never-ending series of fireworks: several Hot 100 No. 1s, sold-out stadium shows, mammoth album sales, historic firsts, and a slew of both Korean and American music awards. The day before we spoke, BTS received three Grammy nominations: two for their collaboration with Coldplay on the song “My Universe,” and a third for the music video for “Yet to Come,” which RM acknowledged is the group’s first Korean-language track to be nominated. When I asked how he felt about the news, he replied so quietly that I almost didn’t hear: “Never expected it.” He paused, then added, “I think that’s, you know, thanks to Coldplay.” Which sounds like something a wildflower might say.

Like much of RM’s past solo work, Indigo is autobiographical without being too literal. He’s keenly aware that much of his youth has been captured online in countless videos, photos, and social-media posts. That willingness to connect is part of what BTS’s fans, known as ARMY, love about the group. But eventually, RM had an epiphany about all this self-disclosure: “My whole life was an exhibition,” he told me. “Unconsciously, or maybe consciously, I’ve been exhibiting my life for decades. So [I said], Okay, then let’s make it into a real exhibition.” He thinks the songs on Indigo unify different facets of his life over the past few years, as well as his different personas. “When you think of Piet Mondrian’s [work], all the paintings are titled Composition, right?” he said, referring to the Dutch painter’s abstract pieces. “At some point, I just realized [my identity] is a composition of my own … I want this album to be a composition of everything.”

That desire to create cohesion out of many parts is reflected in Indigo’s collaborations. RM said that each featured artist added “frequencies of their own,” and that many were “my stars in my youth” whose music he listened to when he was having a hard time. This album will likely serve the same purpose for many of his own listeners in the coming months. In October, BTS’s label, Big Hit, announced that the members are preparing to step back from their career in order to fulfill their mandatory military service under South Korean law, before hopefully reconvening as a group in 2025. Indigo is expected to be RM’s last record until his enlistment ends, and in many ways, it plays like a farewell-for-now. But it also sounds like an artist taking a deep breath and feeling out what new experiences and insights his career might bring in five, 10, or 15 years. He already knows how it feels to stand beneath explosions of color and light. Now it’s time for falling petals.