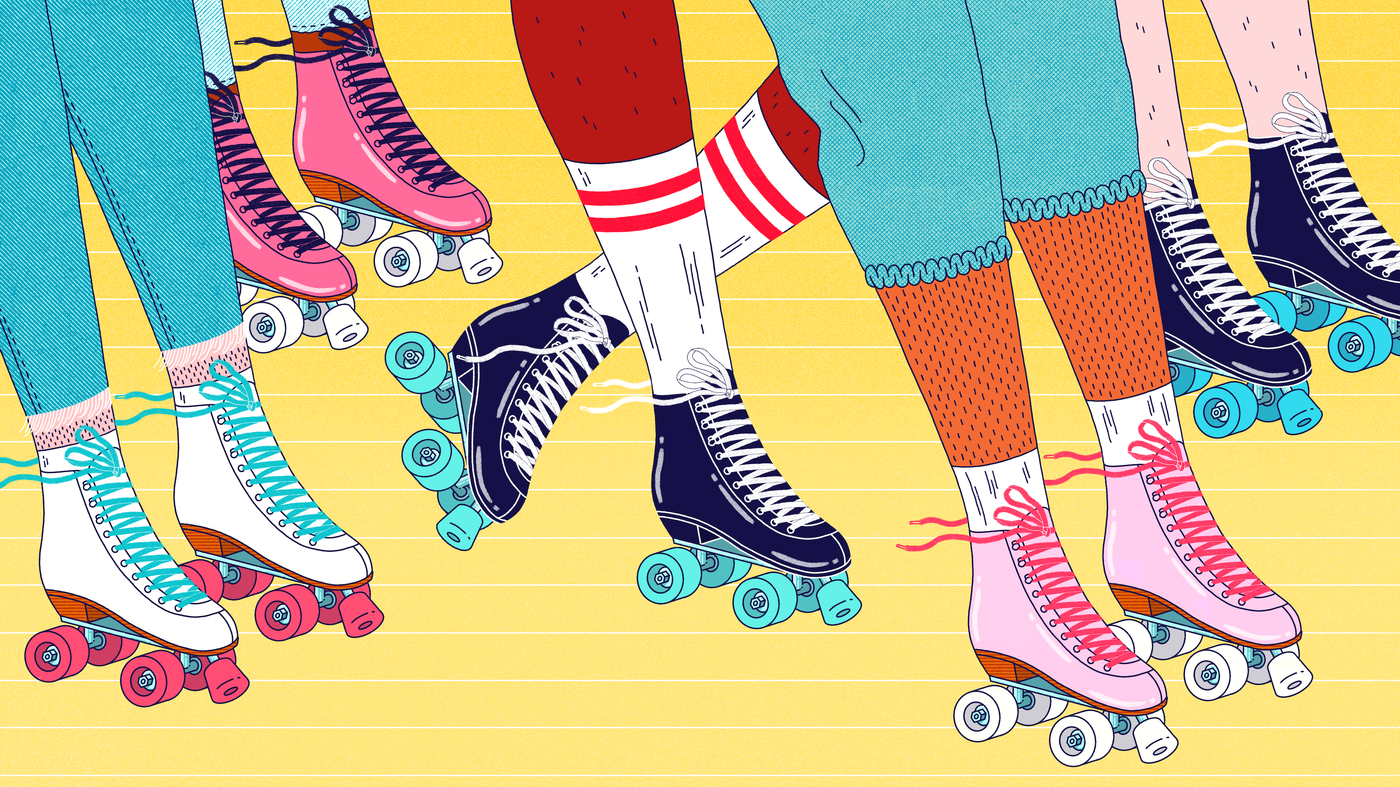 My first goal: try not to look so scared.

It sounds easy, but it actually took quite a few tries before I could relax from the mouth open, eyes wide, fingers splayed expression that being on roller skates gave me. The look of someone who had no idea what they were doing. But not looking scared was something I knew I could accomplish and helped me stick with the painfully embarrassing, humbling and thrilling process of trying to learn to roller skate.

I picked up roller skating at the end of 2021, a coping mechanism meant to combat a year spent in my house and in my head. It gave me the gift of learning something new with my body, and a new perspective on how to move through the world.

Kia Miakka Natisse is the co-host of NPR’s Invisibilia. To learn more about Kia’s journey to finding liberation on wheels, check out Freedom Diving.

Kia Miakka Natisse is the co-host of NPR’s Invisibilia. To learn more about Kia’s journey to finding liberation on wheels, check out Freedom Diving.

I had always admired the sport from afar. I love to see people dance on wheels, slicing through the air seamlessly, carefree and joyful, with ease and confidence. My favorite genre of skating stems from the roller dancing scene of the 1970s and ’80s.

That scene died with disco, though a loyal few kept their skates through the numerous rink closures of the ’90s and early 2000s (check out the documentary United Skates to learn more about the history of American roller-skating rink culture).

The pandemic led to a roller-skating revival of sorts

Sales skyrocketed to the point where there was a global shortage for skates. The roller-skating scene that I’ve found is diverse, queer and welcoming — all sorts of bodies, fashions and ages frequent the rink. Agility on wheels is allocated to the skilled, no matter the body shape or age. It makes me feel safe and welcomed — I feel no pressure to be an idealized type, just the desire to be the most expressive skater I can be.

It’s also very Black, at least in the corner of the skate community that I love. A somewhat unspoken segregation exists in the American roller rink scene, where specific styles of music dictate the composition of the crowd.

If you want to hear R&B, hip-hop, funk, house, soul … that’s called Adult Night, or R&B Night, and it’s usually a 25 and older scene of mostly Black people on quad skates. On a good night filled with experienced skaters, you can see the whole rink move in rhythm to the music, groups of skaters breaking off into choreographed routines, in their coordinated outfits, or matching shirts emblazoned with nicknames, ZIP codes, cities. It’s a party on wheels, athletic and groovy.

Getting comfortable on skates

I have thrown myself into this hobby wholeheartedly, in a way that surprises me sometimes. It feels a lot like love. That said, it did take me a while to get comfortable on skates, and as an adult, I’m not used to feeling that awkward in my body. I got real familiar with picking myself off the floor.

I skated a few times as a kid, but never enough to get good. So starting as a grown-up, with grown-up knees, I was very cautious. Though my grandmother slightly heckled me — “Classes? We would just watch and then practice in the corner” — I signed up for online classes and began the process of learning how to move on wheels.

It reminded me of a baby deer’s wobbly first steps, a toddler’s tentative thumping fat foot. They’re awkward and clumsy, but we all cheer, because having a positive outlook helps.

In skate class, they taught me to wear protective gear, to clap when someone falls, and to encourage them. Falling means you’re trying, and everyone falls in skating. It’s a recreational hazard that almost makes it more fun, the little thrill of possibility that you might fall, a likelihood when you first start out that gradually decreases the more you practice — but never to zero.

As I began to learn, I could jam out alone to my music on my skates at home, but the rink was incredibly intimidating. My legs would feel filled with cement, and I would have a keen awareness of how different my senses were on wheels.

Everything moves so fast, spinning in unpredictable paces and directions. What amazes me about the rink is how people create their own sense of space inside the circular movement, so that two uncoordinated dancers might slip past each other to avoid colliding, all while on rhythm. I’ve seen five or six skaters loop themselves rhythmically in interlocking circles on the rink, spinning, not touching; coordinated, in a sense, but not rehearsed. It feels mathematical in a way, a kinetic balance of bodies.

Some of my favorite skaters are the ones who have been at it for 30-40 years, whole lifetimes of floating in a circle on wheels. A guy who looked like my granddad, with his nickname, DW, etched into his custom skates, once taught me to turn corners by lifting one of my legs. “Like a rudder,” he yelled at me, over the blaring house music. “You can always use it!” He held my hand as we skated around the rink a few times, my face stuck in an open-mouthed grin.

That’s the other thing I love: the hand-holding. It’s a gentle art that I certainly haven’t mastered, but the few times I’ve skated with a partner, it has this deep intimacy to it: skating in rhythm with a stranger, holding their hand while you spin in a circle.

When I’m in the zone at the rink, I’m skating the wind, my only thoughts are listening to the music, and letting it move through my body as I navigate the oval lanes of the skate floor. It’s delicious.

On a really good night, when the floors feel as smooth as glass, and the music grooves just right, it’s like we’re all floating, skating to the same song, but in our own unique ways, together but separate. The main character energy some skaters exude is delightful, and to swim amongst it, expressing my own skate self, is extremely freeing. There’s an invisible web of sound and breeze, carrying us all.

I’ve been skating for almost a year now, and I don’t look so scared on wheels anymore. My favorite thing to do these days is skate backwards — the challenge of navigating the circle in reverse, the tip-toed balance of dancing backward on wheels — is a thrill! I still feel like a novice in comparison to some of the skaters I look up to, but I’ve made a lot of progress. The other day I joyfully skated past an older woman on the rink, tentatively shuffling in her knee pads and wrist guards.

“My goal is to skate like you,” she said, almost under her breath. I tried to contain my pride. “Keep at it!” I yelled over my shoulder. A few minutes later, I tripped, fell, quickly picked myself up, and then kept at it.