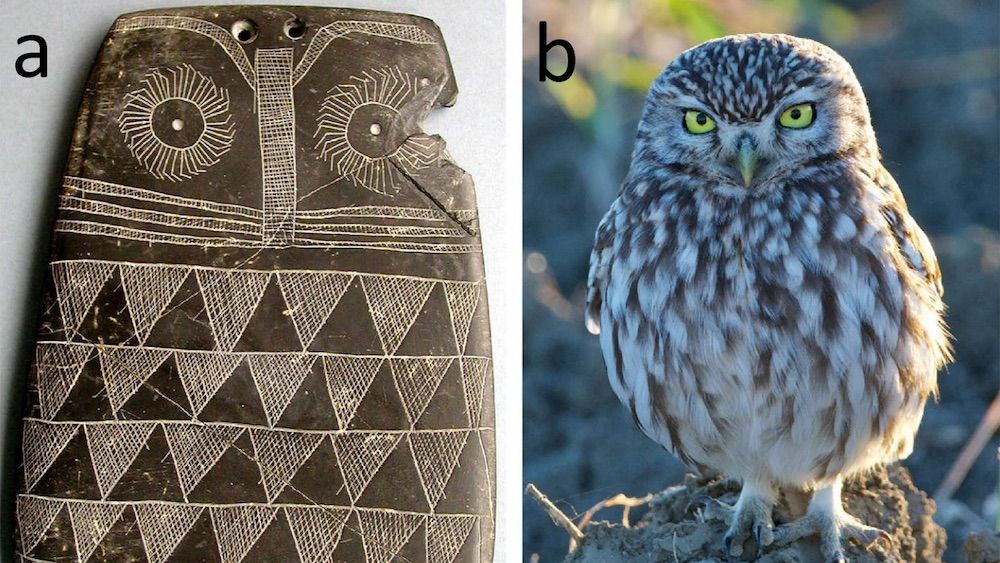 Thousands of years ago, children from the Iberian Peninsula carved pieces of slate into the shape of owls, creating palm-sized toys to play with, a new study suggests. Originally, archaeologists thought the cartoonlike figures were sacred objects representing deities, used only in rituals. But a new study reveals that they also could have served as children’s toys or amulets.

To investigate, researchers from the Spanish National Research Council (CSIC) examined 100 of the approximately 4,000 engraved slate owl plaques that have been collected over the years at tomb and pit sites scattered throughout the peninsula. All of the carvings dated to the Copper Age (3500 B.C. to 2750 B.C.) and were rated for how many owlish features they had, including two circles for the owl’s large frontal eyes, etchings of a beak, wings, plummage and other noticeable characteristics of the birds of prey. Each piece also contained two small perforations at the top, which researchers think could have been used to weave in actual bird feathers.

“My first impression when looking at the engravings was that they were simple to make,” Juan J. Negro (opens in new tab), the study’s lead author and a biologist in the Department of Evolutionary Ecology at the CSIC, told Live Science. “[The carvers] didn’t invest a lot of time or skills into making them, and they could be finished in a few hours.”

Another commonality among the carvings was that they were made using slate, a soft material composed predominantly of quartz, illite and chlorite. Slate’s malleability meant it could easily be carved using pointed tools made of flint, quartz or copper. “Anyone can engrave into it,” Negro said, including children who were just beginning their lessons in Carving 101.

So what inspired these Copper Age kids to focus on owls instead of other animals?

Negro said he doesn’t have an explanation for that, but “owls were a common sighting — even today in urban areas.” At that time, the two most abundant owl species in that part of the world would have included the little owl (Athene noctua) and the long-eared owl (Asio otus), according to the study.

“Most likely these youngsters lived in settlements and would see owls regularly, since they’re known to get rid of rats and mice,” Negro said. “Owls are different from other birds due to their large heads and frontally placed eyes, which people find striking. Because of this, if you were to ask children to draw an owl, they wouldn’t need a model, since everyone has an image of an owl in their brains. They’re iconic animals just like horses, dogs and elephants.”

To test this theory, Negro and his team asked a group of modern-day children to draw images of owls, and the resulting artwork looked eerily similar to the ancient carvings.

“We see creating [the owls] as being part of a learning process for youngsters,” Negro said.

Michelle C. Langley (opens in new tab), an associate professor of archaeology at Griffith University in Queensland, Australia, who wrote a 2018 article (opens in new tab) on ice age children’s toys but wasn’t part of this study, agreed.

“Cross-cultural analysis of recent peoples across the globe all find that children — everywhere — will create their own toys,” Langley told Live Science in an email. “These toys are likely to be created out of common or otherwise easy-to-get raw materials, and their form will follow what is in their surroundings. Dolls and figurines are universal and the form that [they] take will likely be of common or important animals to the community — so owls would fit that picture.”

The findings were published Dec. 1 in the journal Scientific Reports (opens in new tab).