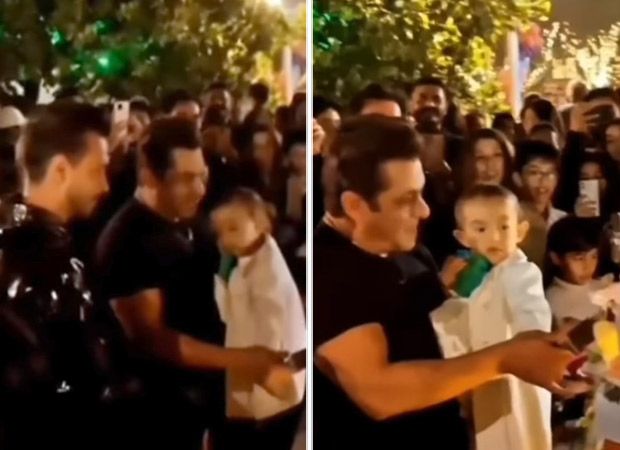 Salman Khan is decently good with kids is a known fact and now his recent video with niece Ayat is winning over the internet. The Bollywood star turned a year older on Monday, and celebrated the occasion with his friends and family at his Panvel farmhouse.

It’s fascinating to know that the niece Ayat shares her birthday with Salman and turned two this year. A fanclub posted a video of Salman dancing with sister Arpita Khan’s daughter Ayat on “Tamma tamma” in the most adorable way. As the loving mama got her to dance holding her hands, the cheerful kid had the biggest smile on her face.

In another video shared by fans, Salman Khan can be seen slicing the cake with Ayat and even singing the birthday song for her.

Salman Khan’s birthday celebration commenced on a rather worrying remark as the actor was bitten by a snake. On the eve of his birthday, he opened up about the episode to the media, sharing that he is fine. He said, “It wasn’t much, a snake had entered one of the rooms, the farmhouse is quite in the jungle in Panvel. When the snake entered the room, kids got scared so I went in to see and asked for a stick, the stick that came was a small one so I asked for a longer stick, and they got one, with which I picked up the snake with a lot of love and brought it out, and the snake wrapped itself on the stick and then it started climbing upwards. It came quite close to my hand so I caught it with my other hand and dropped the stick to be able to leave the snake (in the jungle).

Known for his machoness, the Bollywood superstar further gave details about how the reptile bit him. He said, “The villagers know what snakes come around. This was a Kandhari snake, and they started screaming ‘kandhari, kandhari, kandhari’. That’s when the snake bit me once, then there was more chaos when they screamed ‘chaavla, chaavla, chaavla’ (the snake has bit), that’s when the snake bit me again. Then they all screamed ‘hospital, hospital, hospital’, saying that I should be taken to a hospital quickly. There was so much commotion, the snake was a bit venomous, and it bit me again. I was taken to the hospital, and there we came to know that it is a different kind of snake, not the great kandhari.”

“On returning from the hospital, we saw that the snake was still here, and we took it back to the jungle. I am doing fine now, I have taken an anti-venom for almost all snakes like great (kandhari/cobra), viper, because we were not sure if it was a poisonous snake or not, just by looking at it. After giving me the shot I was kept there for six hours for observation,” he added.

On the work front, Salman Khan lately announced the sequel of Bajrangi Bhaijaan which will be titled Pavanputra Bhaijaan. He also has Tiger 3, Kabhi Eid Kabhi Diwali in store for him. The Bollywood Bhai also has a special cameo in Shahrukh Khan’s Pathan which also stars Deepika Padukone in the lead.

Also Read: Salman Khan and Genelia Deshmukh dance their heart out in this video from the superstar’s birthday celebrations