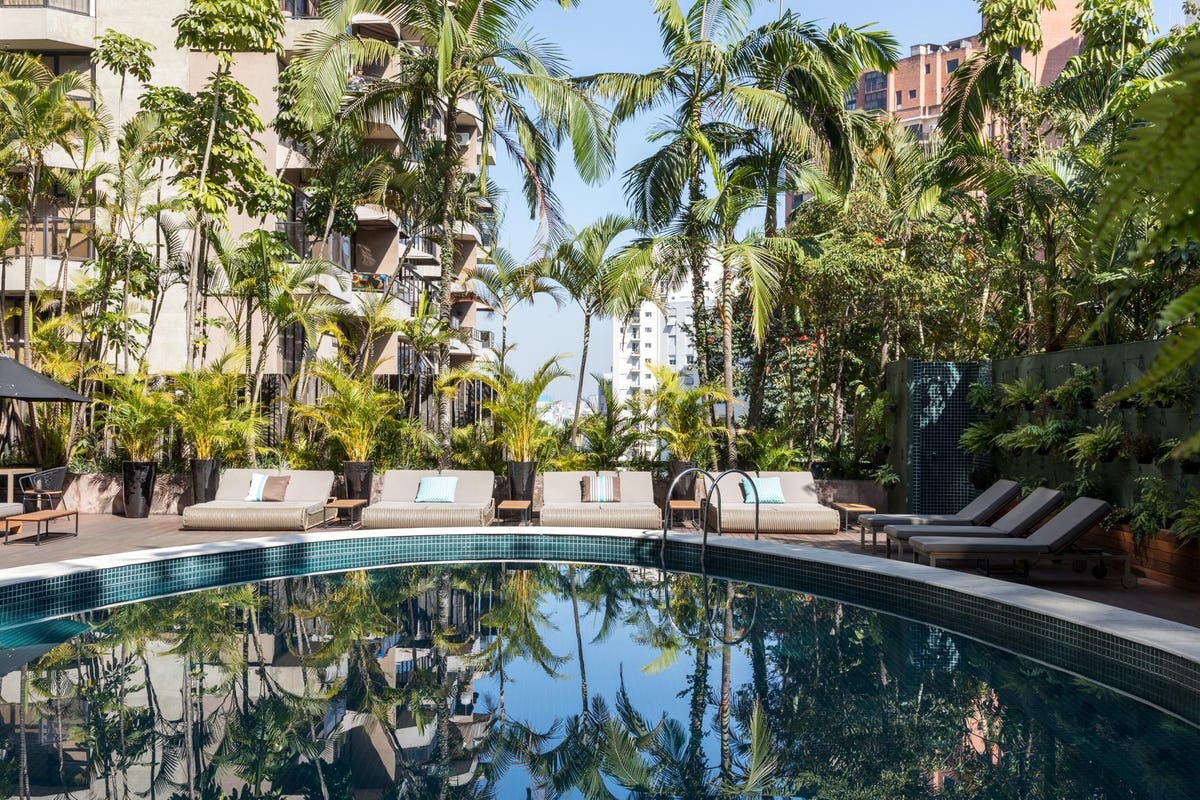 No one wants to be a “tourist.” When travel offers us the opportunity to try on a different persona, escape to a different life, and dream of a different way of being even if just for a weekend, it’s too enticing not to succumb to the troupe of a tourist. In São Paulo, Brazil’s coruscating financial mega city, I tried on the role of a chic Paulista, what Brazilians call a local of São Paulo. Here’s my finding after a week as an acting Paulista: it was fantastic. Part of what made it so was staying at the Tivoli Mofarrej São Paulo Hotel, the luxury hotel that touts itself as the “exclusive starting-point” for exploring all of São Paulo’s grandeur. It indeed is.

Tivoli Mofarrej São Paulo’a 23 story tower is burrowed beautifully in the Jardin district, one of the city’s most desirable neighborhoods known for its leaf-lined streets. Trianon Park, a well kept garden with sculptures and massive palms, is just two blocks from the hotel. I did morning strolls in the park after getting a latte from the ridiculously chic Perseu Coffee House, found a few blocks further. Another few blocks north from the hotel is the must-do Museu de arte de São Paulo (MASP), the internationally lauded museum unmistakable for its two red lateral beams and concrete structure designed by Lina Bo Bardi. It’s particularly a good time to visit the museum, too, as you can see the construction of the ambitious 14-story sister structure that will link both buildings via an underpass and “reinforce MASP’s role as an international reference” for future generations and locals.

Gardens and iconic museums aren’t the only walkable attractions from Tivoli Mofarrej São Paulo. The two Michelin-starred D.O.M restaurant, the upscale Brazilian eatery helmed by Brazilian Chef Alex Atala, is less than half a mile away. Though I couldn’t snag a reservation for D.O.M, still considered one of the world’s best restaurants, I did manage a small table at A Casa do Porco Bar, just under two miles from Tivoli Mofarrej São Paulo. Far more casual but arguably just as coveted as D.O.M, A Casa do Porco Bar is an adventure in itself of all parts delectably pig. I went twice, and so should you.

Least one thinks Tivoli Mofarrej São Paulo is only a well situated, stunning hotel surrounded by cultural and gastronomic attractions, it’s certainly not. The hotel is an attraction itself to well heeled Paulistanos for several reasons. SEEN, the hotel’s 270 degree Japanese restaurant guided by Chef Olivier da Costa, is the Asian restaurant destination of São Paulo. The view alone at sunset is reason enough to grab a seat at the massive center bar, but the sake menu is unmatched. Downstairs on the first floor of the Tivoli Mofarrej São Paulo, Must bar is its own garden oasis featuring live jazz music most nights as well as garage-style windows that open to six feet walls of fern fauna. Plenty of Paulistanos and guests also head to the hotel’s Anantara spa, the international spa that exclusively partners with Tivoli hotels. (Two others exist in Portugal at Tivoli’s Lisbon and Sintra properties.)