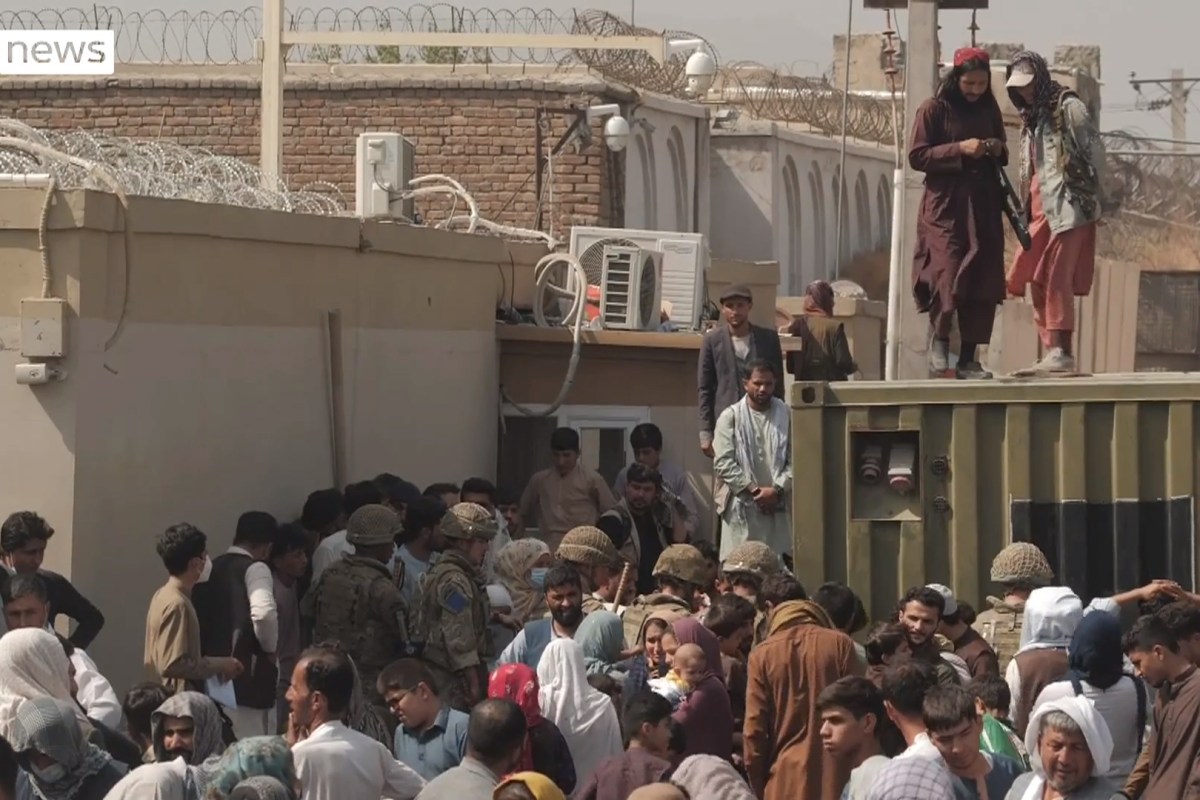 THE SAS was involved in a daring desert raid to rescue 20 elite soldiers surrounded by the Taliban, hundreds of miles from safety.

The special forces troops were left stranded in Kandahar province after Taliban militants took over Afghanistan.

The soldiers sent an SOS request to bosses back in the UK asking to be taken out of Afghanistan as soon as possible, the Daily Mail reported.

They couldn’t use the airfield at Kandahar as it had been overrun by the Taliban.

The SAS troops then fought their way to a secret location in the desert and went into hiding.

They sent the coordinates of their location to Special Forces headquarters, using coded messages.

RAF chiefs then had to find an aircraft that was capable of landing and taking off in the desert to rescue the troops.

The aircraft had turned off its identification sensors, meaning radars couldn’t follow it to the desert where the SAS soldiers were hiding.

It then made a dramatic landing in the desert during the night.

A source told the Mail: “It was a very hush, hush mission. Kandahar had fallen to the Taliban on Friday and the guys were down there for five days after that.

“The enemy were rampant and killing a lot of Afghan Special Forces whom the SAS had been working with. So it was a very urgent mission.

“Credit to the Hercules crew from 47 Squadron for landing the aircraft at night on rough terrain and getting her airborne again with the guys and their equipment aboard. It was textbook.”

The aircraft then reappeared on flight radars as it headed towards a military base in Dubai.

It comes as Boris Johnson will urge Joe Biden to delay the withdrawal of US forces from Afghanistan as thousands try to escape the Taliban.

Mr Johnson will use a G7 meeting on Tuesday to ask the US President to keep American troops at Kabul airport beyond his August 31 deadline.

Unless Mr Biden decides to keep troops in Afghanistan, then their UK counterparts will also withdraw from the airport within days, the Daily Telegraph reported.

The UK government is preparing for thousands of Afghans to attempt to leave their home country after the Taliban’s takeover.

Military commanders have identified August 25 as potentially the last day they can process refugees – including people who worked as British interpreters, the Daily Mail reported.

The last British evacuation flight may therefore have to leave as early as Tuesday or Wednesday.

Britain will ramp up mass evacuation plans and will aim to fly up to 6,000 people out of Afghanistan this week, The Times reported.

Furious former generals have urged Mr Johnson to continue the Afghanistan evacuation mission without the US “to get every last Brit out”.

Ex-military top brass say even if US forces pull out, the UK should go it alone.

They say our claim to be “global Britain” will be left in tatters if we cannot continue the airlift ourselves.

“What’s the point of having armed forces if we cannot hold a single airfield? It makes the whole global Britain idea a joke.”

However, the Ministry of Defence ruled out remaining without the US — while other ex-military chiefs warn it would be too dangerous.

Mr Biden has refused to rule out extending the August 31 deadline for evacuations in Afghanistan.

The commander-in-chief said US forces would stay as long as necessary to rescue citizens and their Afghan allies from the airport in Kabul.

But he claimed there was “no way” to evacuate significant numbers of people from Afghanistan without the “pain, loss and heartbreaking images” seen over the past week.

President Biden, speaking from the White House, said: “Let me be clear – the evacuation of thousands of people from Kabul is going to be hard and painful.

“Our first priority in Kabul is getting American citizens out of the situation as quickly and safely as possible. Any American that wants to get home will get home.

“There is no way to evacuate this many people without pain and loss and heartbreaking images you see on television.”

Mr Biden said defence officials “hope” they will not have to extend the evacuation operation, but added: “There are going to be discussions I suspect on how far along we are in the process.”

At least seven people including a toddler were crushed to death in a stampede at Kabul airport as desperate families attempt to flee the Taliban.

Carnage reigns as thousands trying to escape from Afghanistan continue to descended on the last escape route as they hope to get aboard a plane travelling to the West.

Harrowing scenes – described as some of the worst since the Taliban took over – occurred yesterday as there was a horrific crush and stampede outside the airport as crowds surged amid gunfire.

Men, women and children were crushed together in 31C heat – many without provisions – as there were reports of people collapsing from exhaustion and asphyxiation.

Taliban officials however have blamed the US for the carnage – saying “America, with all its power and facilities… has failed to bring order to the airport”.

“There is peace and calm all over the country, but there is chaos only at Kabul airport,” said official Amir Khan Mutaqi .

One mum, a former interpreter, revealed her two-year-old daughter was trampled to death as the family attempted to get to the airport, reports the New York Times.

The unnamed woman told how the crowd surged as the family was thrown the ground, with other desperate escapees simply trampling them.

It’s feared terrorists may try to shoot one of the planes down.

Flights continue the desperate air lift to try rescue as many people as possible from the airport as thousands flee the Taliban after they seized power in Afghanistan.

The dangerous mission however has now taken on a new terrifying element as the aircraft are now having to face the threat of a potential missile attack as they take off from Kabul.

US military planes are now doing rapid, diving combat landings at the airport surrounded by Taliban fighters to try and beat the threat of a missile attack.

And video showed a French military transport plane yesterday deploying flares, which are designed to confuse heat seeking technology that allows the weapons to look on.

Taliban forces are not believed to attempt to shoot one of the aircraft down – with such an action potentially sparking further intervention from the West.

US military officials have however said they fear a possible attack by ISIS-linked groups who are reported to be lurking in and around Kabul as they seek to take advantage of the carnage.

Colonel Richard Kemp, the ex-head of the British forces in Afghanistan, has called for the terror threat level in the UK to be raised to severe.

He warned there was a threat of attacks in Britain by jihadis inspired by the Taliban’s takeover of Afghanistan.

He told the Mirror: “This is a direct threat to our country.

“Given the immediately increased threat from British jihadists inspired and motivated by events in Afghanistan the Government should seriously consider raising the UK threat level and increasing counter-terrorist assets available to the intelligence services and police.

“Jihadists everywhere have been celebrating the Taliban victory. This will have re-energised them, encouraged them and motivated them to strike.”

British soldiers have marshalled hundreds of people on a flight to freedom from Afghanistan — while thousands remain behind at the mercy of the Taliban.

Some 265 Brits and Afghan nationals crammed aboard the RAF C-17 transport plane which took off from the mayhem of Kabul on Saturday night heading for RAF Brize Norton.

One of the lucky few was Uber driver Helmand Khan, who had spent three days desperately trying to get past the Taliban to safety.

It came as IS jihadists threatened to attack Kabul airport and the death toll on the ground climbed to at least 20, including seven on Saturday.

Many of the victims were crushed in stampedes as the Taliban fired into the air to clear crowds. The Ministry of Defence said tonight 5,725 British and Afghan nationals had been evacuated since the rescue mission began on August 13.

Among them were 3,100 Afghans including interpreters who helped UK forces, others eligible under the Afghan Relocation and Assistance Policy programme, embassy staff and nationals from partner nations.

Around 1,000 had been flown out in the previous 14 hours, the MoD said, with the rescue mission “gathering pace”. One of those who made it out on Saturday’s RAF flight, Mr Khan, from West London, sat arms crossed with his children by his side.

Mr Khan, who had been visiting relatives, was seen thrusting his British passport at TV crews as he tried to get into a compound where the British Embassy house evacuees.

Despairing Mr Khan told the BBC: “You’ve seen by British passport, these are my children! I came in the morning, five o’clock, but I’m still waiting. In the last three days I am trying to go inside.”

Watching the huge RAF plane depart were five young women sat sobbing at the runway’s edge as they waited for their flight out.

Behind them heavy machine-gun fire tracer rounds lit up the sky in a city in which they had dreamed of living successful and happy lives.

They were among lucky ones who had survived the deadly crushes and the scrums at the airport perimeter.

They had avoided the beatings by Taliban guards and had been called forward and brought to the airport.

But their tears were not of joy, or relief, but of grief. Farahnosh, 22, a medical student in Kabul, said: “I am leaving everything. My life is in Kabul. My family is in Kabul. I am a student and I love studying.”

In a line to an evacuation flight to Qatar was Mahida Foku, 16, and her family. She said: “We are leaving our hopes and our memories here. We don’t know what is ahead.”

Journalist Bilal Sarwary, who was on the same flight, said: “What you are seeing here is a brain drain. This is the cream of the crop being forced to leave.”

As the situation worsened, military planes have taken to making nose-dive combat landings at the airport amid fears of an attack. Aircraft also used flares designed to confuse heat-seeking missiles.

Britain’s ambassador to Afghanistan, Sir Laurie Bristow, tweeted from the evacuation handling centre that the “huge effort” to get people out safely was “gathering pace”.

He said: “Our soldiers, our diplomats and all the forces have been working around the clock to get our British nationals, Afghan colleagues and Embassy staff to safety. There is still a huge amount of work to do.”

It emerged yesterday a mum and three children, two aged five and nine, from Notts had been flown home on a military plane.

The mum was caring for sick relatives when Kabul fell. Despite having correct documents, they said, the Taliban had stopped them leaving.

It came as soldiers continue to pluck children to safety at the airport. One photo showed US Army Sgt Breanna Jessop taking care of an unaccompanied infant waiting to be reunited with its parents.