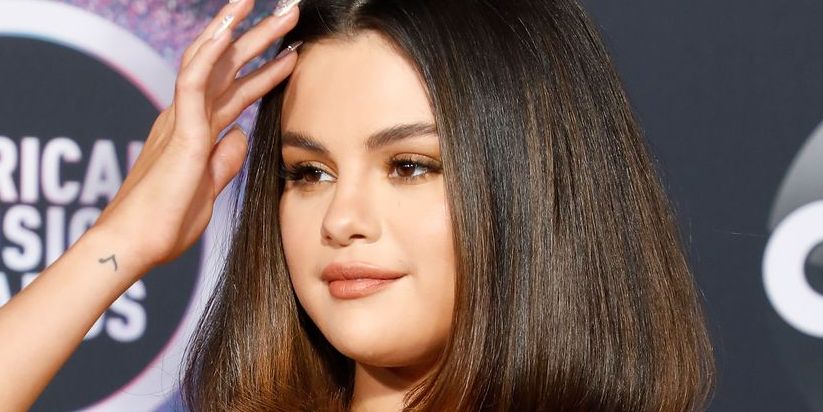 I believe it was William Shakespeare who once said, “There’s a million reasons why I should give you up, but the heart wants what it wants.” And in the case of Selena Gomez, the heart wanted a sh*t ton of tattoos. And she can’t get enough (sorry). Like, honestly, I can only assume that when she’s in NYC, celebrity tattoo artist Bang Bang is all, “WHEN YOU’RE READY, COME AND GET IT,” and Selena replies, “NA NA NA NA,” but then she changes her mind and is like, “Ugh, sure, fine, be there in five.”

All of which is to say, Selena has some cool tattoos, including giant prayer hands on her thigh, some music notes, an om sign, various numbers, an Arabic phrase, and a Bible verse. Anyway, all of Sel’s tattoos are super meaningful and we went ahead and rounded ’em up!

No words for how beautiful this one is!

Most likely a nod to Selena’s faith. “I’m very, very spiritual,” she said in her April 2021 Vogue cover story. “I believe in God, but I’m not religious. I’ve been a Christian for a while now. I don’t talk about it too much—I want to, but it’s gotten a bad rep. I just want to make it clear that I love being able to have my faith and believe in what I believe in, and that truly is what gets me through.”

Selena got this one with Julia Michaels, after she made a surprise appearance at Julia’s concert back in early November. She shared the tattoo to her Instagram Story, writing, “My arrow points to you forever.” Cuuuuute.

This tattoo was a joint effort between Selena and the cast of 13 Reasons Why—and it has a super-special meaning. The “;” represents Project Semicolon, a suicide prevention and mental health advocacy nonprofit.

Sel got this tattoo with four of her closest friends (get it) and explained that they’re “my 4 for the rest of my life.”

That same night, Sel got a #1 tattoo with her BFF Courtney Lopez, writing, “You are the definition of FEARFULLY and WONDERFULLY made baby! #1.”

Selena hasn’t revealed the meaning behind this one, but fans seem to think it’s a shout-out to her little sister Gracie. Lovely if true!

Meanwhile, this little dude is believed to be in honor of Selena’s grandmother, who she once called “Sunshine” on Twitter.

The “LXXVI” on Her Neck

Kay, this is “1976” in Roman numerals, which *happens* to be the year Selena’s mom, Mandy Teefey, was born. Bang Bang, who designed the tattoo, told E! News that it “was a tribute to a family member who she said means a lot to her. Selena was nervous it might have been painful, so she held her best friend’s hand the whole time. But she did a great job.”

Apparently, fans thought this was a heart at first, but Selena set the record straight to Access Hollywood, saying, “It’s a music note. Everybody thought that it was a heart for some reason, but music is a big influence in my life. I was named after a singer, I’m a singer, and a lot of other personal reasons. So that’s what I got.”

“Love Yourself First” in Arabic

Yet another tat curtesy of Bang Bang in NYC, who told E! News, “Selena already had it written out how she wanted. The tattoo is about 4 inches and didn’t take too long, probably about 30 to 45 minutes. The longest part is laying it out. We played with it a bit, laying it out until we found the perfect spot.”

“God Who Strengthens Me”

Apparently, this is a play on the Bible passage “I can do all things through Christ who strengthens me,” and Selena managed to successfully hide it from fans for about a year.

See that blurry smudge on Selena’s hip? Yeah, well, fans think it’s an om sign. I’m not convinced, but sure, why not!