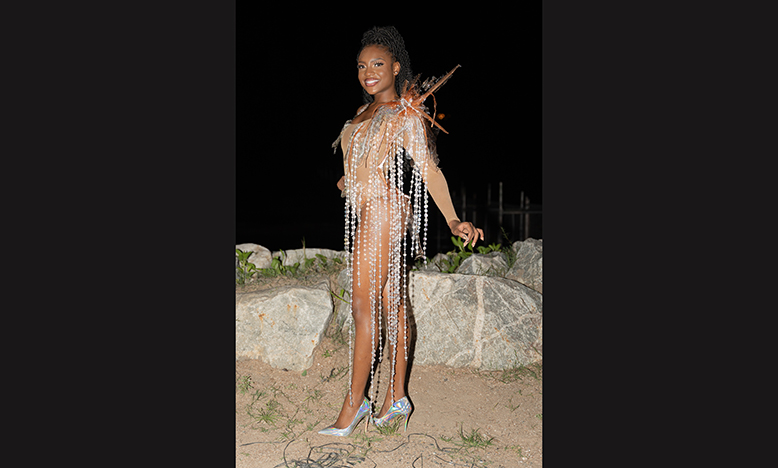 DELEGATES of the Miss Jamzone Pageant, on Sunday, thrilled the crowd as they graced the stage in the ‘Fantasy Swimwear’ segment of the pageant at the Jamzone Beach Jam, hosted at the Kingston beachfront, Georgetown.

Jade Mercurius wore ShaSha Designs by Keisha Edwards, and Phelicia Adams wore a Dexter Gardner design. Lastly, Jada Jones wore a Rhonda Jackson piece.
According to a release from the company, the judging panel for the Fantasy Swimwear consisted of Former Beauty Queens Yulex Fung and Christa Simmons along with fitness expert Yusuf Khan and famous designer Quinton Pearson of House of Pearson.

In response to the crowd’s receptiveness to the delegates, the Pageant Co-ordinator Mr. Wasim Khan said: “It was a grand introduction of the delegates when they burst onto the stage in the first leg of the competition and judging from the crowd’s response they were ecstatic!

“This is just one leg with 5 more sizzling rounds to go.”
The winner of the Fantasy Swimwear segment will be announced at the culmination of the Miss Jamzone Pageant slated for the National Cultural Centre (NCC) on Saturday, August 13.

At the August 13 event, the ‘National Costume’, ‘Talent’, ‘Swimwear’ and other segments will be hosted. Tickets will be on sale at the National Cultural Centre for $2000, $2500 and $3000.
The next segment will be the sit-down interview on LIVE Television with Radio and TV presenter, Feliz Robertson, next Monday.