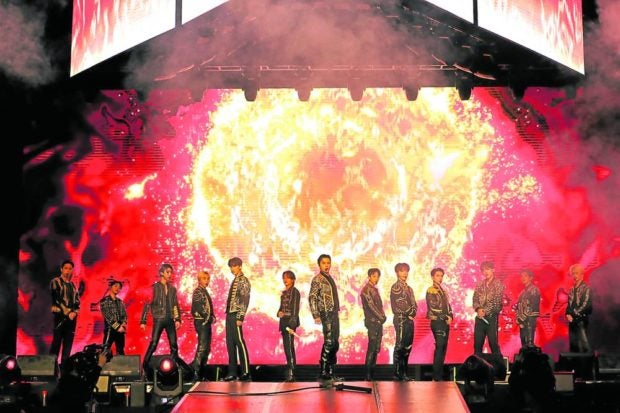 There was no shortage of pyrotechnics in the recent two-night show of Seventeen’s “Be the Sun” world tour in Manila. Flames shot up from the perimeter of the stage. Bursts of fireworks amplified climatic shifts in the music’s tenor.

And yet, none of which burned brighter, or hotter, than the 13 men onstage. For almost three hours, S. Coups, Jeonghan, Joshua, Jun, Hoshi, Vernon, Wonwoo, Woozi, DK, Mingyu, The8, Seungkwan and Dino set the stage ablaze with a 20-song repertoire that encompassed the breadth of the K-pop group’s myriad skills and talents.

What sets Seventeen apart from the rest of the field is their tight and intricate choreography that they execute with unfailing synchronization and panache. The band’s hard-hitting opening numbers showcased just that.

In “Hot,” which featured punchy and, at times, angular moves, the boys made good use of the real estate, seamlessly weaving in and out of different configurations: They formed dynamic dance lines, dissolved into smaller groups, before merging back into a phalanx. The more frenetic, “Hit,” meanwhile, had the boys leaping about in unison to thumping electronic beat drops. 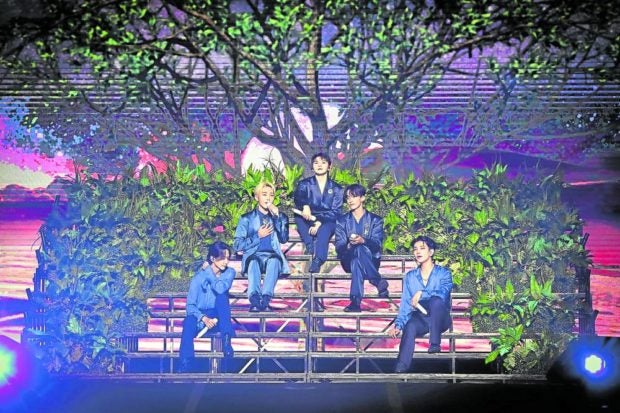 While they navigate the stage with precision, their production numbers never came across as overwrought or mechanical. They might have been pulling off the same steps, but each member did so with their own flourishes.

For instance, midway through the show, in the fun and freewheeling dance tunes “Mansae,” “Left and Right” and “Very Nice,” it appeared at times that the members were improvising and spontaneously moving to the music—only to the snap back into the choreography or formation the next minute.

A live performance is a two-way street—a nonstop volleying of energy between the artist and the crowd. And if Seventeen were fire, the Carat—the band’s devoted following—were the fuel. With every forceful dance break and every high note sung, the fans counter with equally intense cheers, chants and occasional shrieks of, “Ang gwapo!” 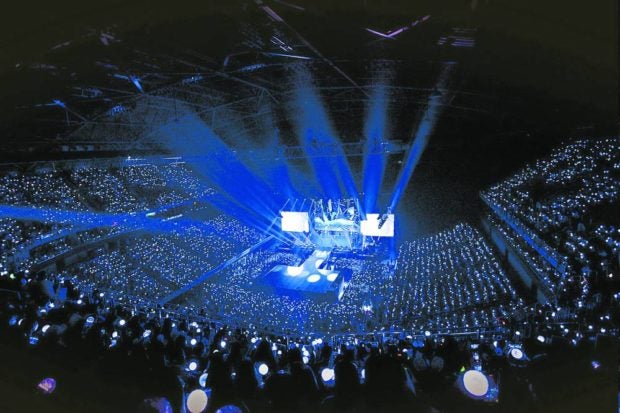 “Long time no see! Manila’s energy is no joke! It has been a long time coming, right?” member Hoshi told the packed audience during the band’s second of two concerts in Manila, which was mounted by Live Nation Philippines. “It’s so nice to meet you again!”

Though Seventeen mostly performs as a whole, ample spots were given to the group’s three subunits—performance, vocal and hip-hop—all the better to highlight their respective strengths and specialties.

Unlike most of the band’s production numbers that tempted fans to rise to their feet and dance along, the performance unit—which features Seventeen’s most proficient dancers—delivered routines that were best left admired. The pop-R&B midtempos “Moonwalker” and “Wave” evoked sensuousness through Hoshi, Jun, The8 and Dino’s graceful arms and smooth, undulating movements.

The vocal unit—Woozi, Jeonghan, Joshua, DK and Seungkwan—had the fans all giddy with the feel-good midtempo “Come to Me,” before prompting a resounding sing-along from the lightstick-waving crowd with the ballad “Imperfect Love.”

For the hip-hop unit—S. Coups, Wonwoo, Mingyu and Vernon—it was all about the swagger with which they spat out and traded verses in “Gam3 Boi” and “Back It Up.” 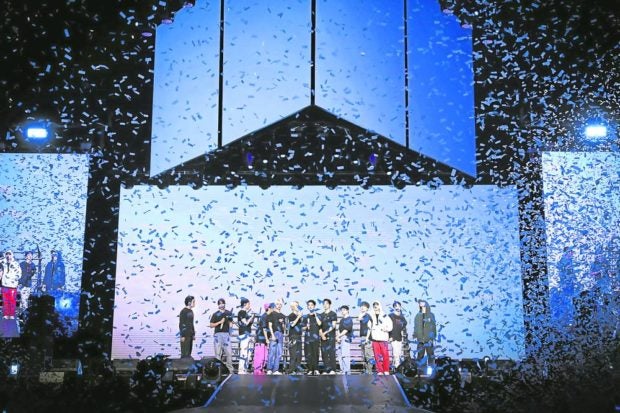 Aside from the music, the crowd reveled in rollicking intermissions where the group could just be themselves, roast each other and goof around. The fans couldn’t help but laugh as they watched the boys have a go at the auto-tuned microphone. They also had a kick listening to the boys try their best to speak in Tagalog. “Babalik kami ulit. Gwapo ba ako?” DK said, drawing cheers and laughter. And as it all happened, the fans hoisted and waved posters and banners with hilarious messages.

The last time Seventeen performed in Manila was for its “Ode to You” tour back in February 2020. Less than a month later, the world went into lockdown and put a pause on the live-music scene. The past two years have been challenging, with the pandemic taking its toll on people’s emotional and mental well-being.

In such trying times, many people turned to music for comfort. And for Filipino Carats, this show was a long-awaited and much-needed respite. After all, the sun—or fire—also illuminates and provides warmth.

“It has been such a long time since we have been here. We’re really glad to be finally back with our new world tour. What we want to do in our concert is to be the light to your inner shadows. So any troubles or hard times you have been through—we’re going to shine a light and wash them all away,” Joshua said.

The band promised to be back soon. And just how soon is “soon”? Four days after their Oct. 9 show, Live Nation Philippines announced that Seventeen will return to the Philippines on Dec. 17—this time, at a much bigger venue. The Philippine Arena in Bulacan.

“We hope to come back soon… We had so much fun. You have never stopped cheering us on and supporting us,” he added. “The overall connection and chemistry we had today was really, really amazing. I just felt your genuine love and I thank you for that. We will definitely be back. And yeah, we love you, guys!”