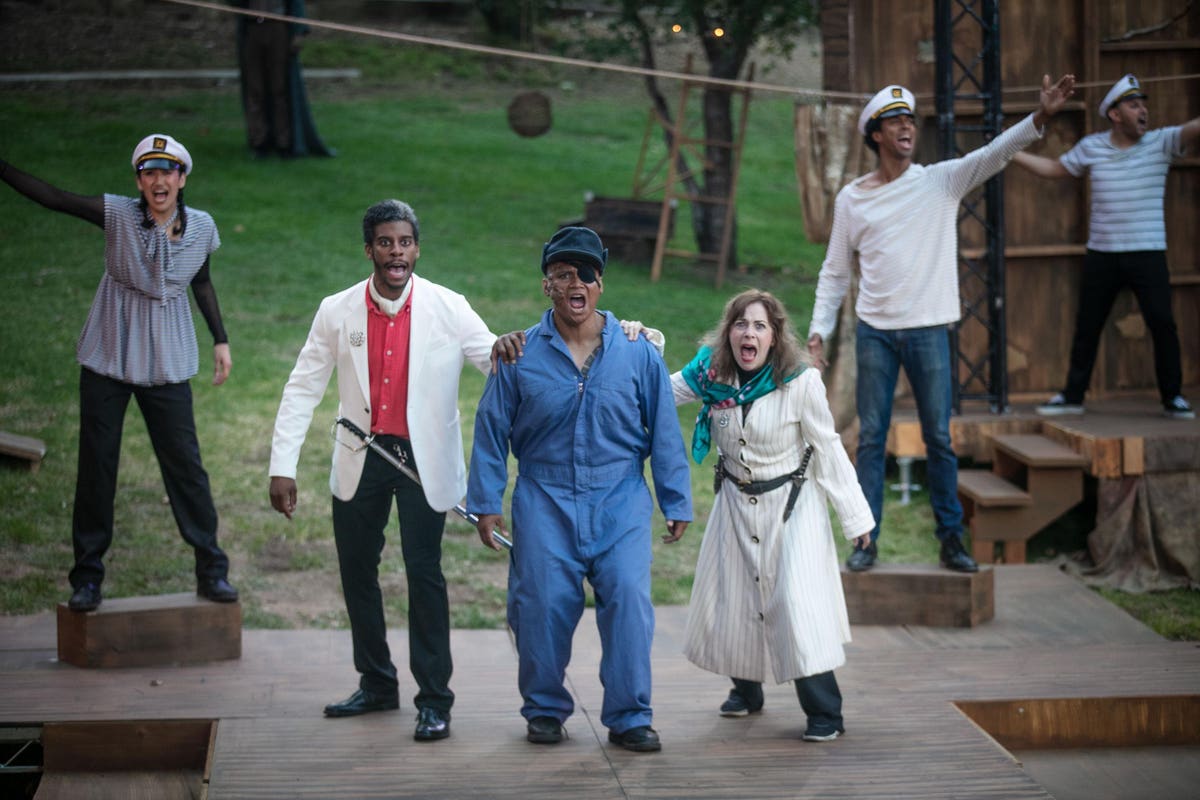 The Independent Shakespeare Company has come a long way since its first free outdoor festival in Los Angeles in 2003. That inaugural performance was attended by 14 people and a dog. A decade later, the company was drawing 40,000 people each summer to its stage in the natural amphitheater of Griffith Park’s Old Zoo. Now, ISC is finally getting its own venue, the Griffith Park Performing Arts Stage Project, a multi-million dollar enterprise that next year will become the troupe’s permanent performance site.

The pandemic hasn’t been easy on ISC. The company, built on accessibility and intimacy, was forced to simultaneously tighten and distance its audience numbers for Covid safety, and performers stopped intermingling with the crowd, one of the theater’s signatures. Funding was slashed and a new online ticketing system (for just 215 attendees per show rather than the usual thousands) means fewer people get to see this year’s joyous production of The Tempest.

But “how far that little candle throws his beams,” to borrow a line from the Bard. I spoke to ISC co-founder Melissa Chalsma about a year that came like madness in the glory of this life, and about how this fine company plans to carry on. The production has performances this weekend and next.

The theater world got hit hard during the pandemic. How’s it going for Independent Shakespeare Company?

Melissa Chalsma: Oh, you know. It’s been a challenge. We can’t have as many people show up as we like because of health and safety compliance. Our usual location in the park is under construction so we’ve had to move to a place one hill over without electricity. We’re working off two RV batteries. We’re also dealing with a different philosophical issue in that we need to restrict the numbers of attendees. You used to be able to just show up. Now you need to make reservations online exactly one week before the show. Those spots become available at 10 am the week before a show, and are usually gone by 11 am. This seemingly minor change reveals something important about who has access to the Internet and who has time to be online during the workday, and it’s not ideal for us in terms of being open to anyone who wants to attend.

Your performances are well-known for audience interaction. That’s changed, too.

Melissa Chalsma: Yes, that’s probably the weirdest thing for us. Aesthetically, we try to get characters to engage with the audience. But because of Actors’ Equity rules around Covid safety, we can’t bring audience members on stage or interact with them. But we’ve found different ways to interact with the audience. We’re in a little secluded dell that’s part of the Old Zoo, and there’s an area where characters can enter through an old riverbed when there’s still daylight. As the sun goes down and the lights come up, it’s quite magical because the stage area begins to resemble an an island, which is great considering we’re doing a production of The Tempest.

Melissa Chalsma: The renderings look great and the work is happening already. We’ll maintain the beautiful informal feeling and ground seating that we’ve always had but the stage will be more permanent and allow us to have better access to, well, electricity for instance, and also restrooms. It’s so exciting after an eight-year process to know we’ll have a dedicated stage. The biggest benefit is that it will help audience members coming up from parking areas. It’s not an easy walk now, especially for people with mobility issues, so we hope to give even more people the chance to experience these productions.

What does this theater company bring to LA that you don’t get elsewhere?

Melissa Chalsma: What differentiates us is our extreme diversity across every spectrum of age, race, geography, income level. Tom LaBonge, the late, great L.A. City Councilman, used to tell us, “your audience is like Dodger stadium. Everybody is there.” Normally, 75 percent of our audience is under 35 and 20 percent is under 18, so it’s often their first experience seeing Shakespeare and, indeed, their first experience seeing live theater. Being racially diverse has been a cornerstone for us for the past decade. Our team of performers and crew members is primarily BIPOC, which has been a hallmark for us for a long time. Our performances are free to attend, of course. All this creates an atmosphere that’s uniquely welcoming, uniquely informal and uniquely Los Angeles. The audience feels welcome, almost the way you would at a rock concert.

Or on a deserted island. Any thoughts on how The Tempest is relevant to these times?

Melissa Chalsma: Oh, it has great resonance with the pandemic. It’s about a group of people who’ve been isolated for years, and whose only path forward is forgiveness and a welcoming love as they emerge into the larger world. It’s exactly the show our community needs now.

This interview has been condensed and edited for clarity.