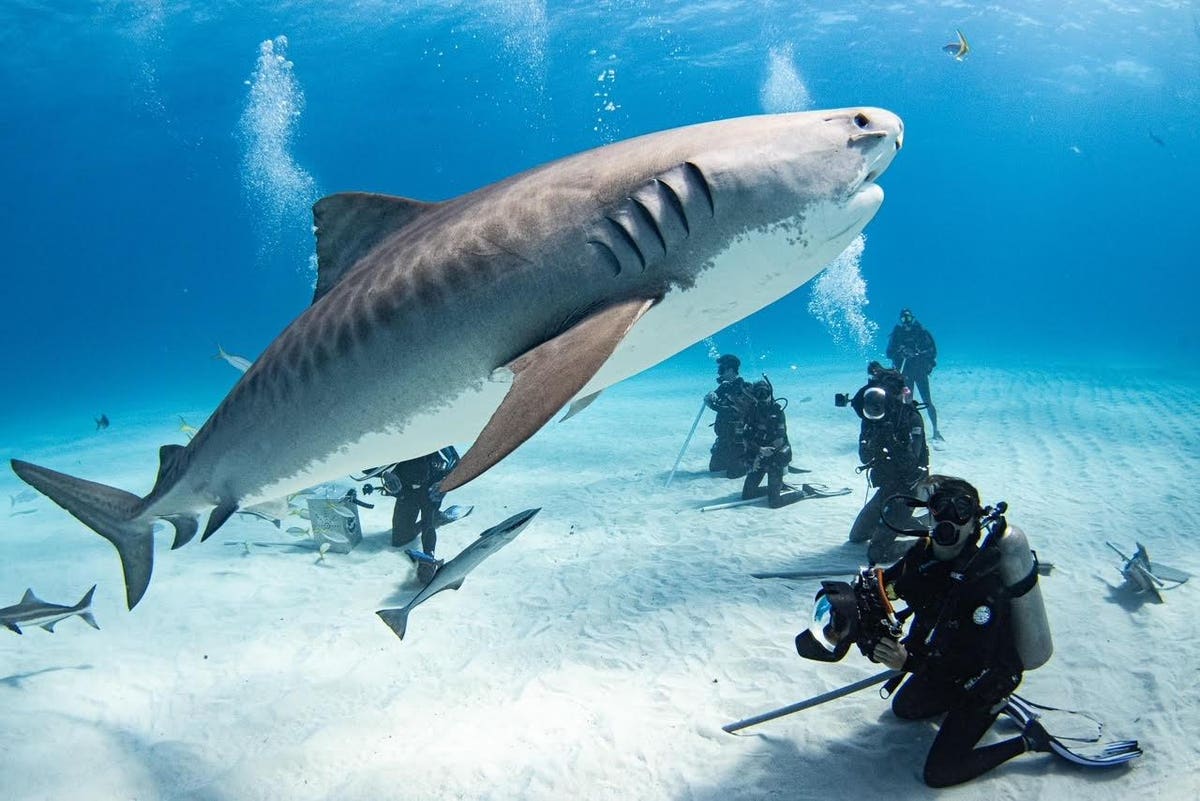 I found myself staring right into the eyes of a large Tiger shark, its mouth slowly opening and closing as if breathing my space. My first time swimming with sharks was on the North Shore of Oahu, off the coast of Hale’iwa, as our cage-free snorkel adventure had us surrounded by a collection of large sharks. It was one of the most breathtaking experiences getting face to face with these powerful creatures, and I became obsessed with searching for the best dive spots around the world for beginners and experienced divers.

One of the ultimate bucket list adventures is the thrill of controlled shark encounters, whether free diving or from a cage, an extraordinary opportunity to encounter these powerful predators from close up and believe it or not, shark diving with the proper operator actually helps them survive.

I spoke with some of the world’s leading shark experts on selecting the best experience, from cage diving with Great Whites at Mexico’s Guadalupe Island to swimming with hammerheads in the Philippines while always supporting and protecting the species.

Many adventurers consider doing cage free dives, and according to Dr. Craig O’Connell with the O’Seas Conservation Foundation, “This all depends on the level of experience of the diver and the sharks that specific diver is diving with. Sharks are made out to be menacing man-eating machines; however, this couldn’t be further from the truth. So in certain situations, diving outside the cage can be a safe way to both observe sharks and their natural environment. However, we must also understand that some of the larger shark species, such as the white shark, are top predators. While I swim out of the cage with them routinely, that is only because I have 1000’s of hours of experience diving and observing them. For people without that level of experience, I would suggest using cages with white sharks. This allows the divers to see these sharks close up and personal, which will allow for these divers to gain an unprecedented respect for the animals. Usually these experiences are motivating and immediately dispel any sort incorrect stereotype created by cinema or the media – which then results in more supporters and conservationists in the long run.”

When it comes to the benefits of diving with sharks, Stefanie Brendl with Shark Allies says, “Sharks are worth so much more alive than dead. Just look at the future potential of eco-tourism – it is many-fold that of commercial fishing. Places like Palau, and the Bahamas have greatly benefited from being shark diving meccas. Sharks are a keystone species – they are essentially the white blood cells of the ocean. They take out the weak, the dead and the sick and therefore keep diseases from spreading in fish and mammal populations. They make sure the strongest, fastest survive and that keeps populations vibrant and strong.”

And finally, Shark research expert Dr. Mauricio Hoyos, with Pelagios Kakunjá, talks about the rapid decline in the shark population. “The overfishing of sharks happens because of the huge demand and a lack of management to ensure shark fisheries are sustainable. Around 100 million sharks may get killed annually, often targeted for their fins for shark fin soup.

Researchers have recently determined that sharks and rays’ global population has crashed by more than 70% in the past 50 years, with massive ongoing losses pushing many species towards extinction. We still have time to avoid many species’ collapse by understanding the importance they have in our marine ecosystems. We must start by educating ourselves and leave behind ignorant beliefs that sharks are mindless, dangerous animals. We must also identify the different threats they are facing in our countries to develop scientific, management and conservation programs to protect them.”

Hollywood is jumping in with extensive coverage this Summer, including a recent Nat Geo special, Shark Beach, which airs on Disney+ starring superhero Thor actor Chris Hemsworth. Hemsworth, a first-time scuba diver, joined underwater conservationist Valerie Taylor as they dived at Fish Rock off the Mid-North Coast of New South Wales to encounter massive nurse sharks. Shark hunting, climate change, and environmental devastation are drastically reducing and displacing specific shark populations. The special put a spotlight on these magnificent creatures and their plight to raise awareness about the problem. The family-owned South West Rocks Dive Centre led the expedition.

But many researchers are not happy with Hollywood’s portrayal of sharks during the Discovery Channels’ popular televised Shark Week. “The public’s perception of sharks, shark science, and shark scientists is heavily influenced by Shark Week. Unfortunately, we found that Shark Week programming focuses on negative portrayals of sharks and does not often accurately portray shark research nor the diversity of expertise in the field. While critics have been saying this for some time, we now have the numbers to back it up,” said lead author Dr. Lisa Whitenack, associate professor of biology and geology at Allegheny College.

For those who wish to support shark tourism, here are five of the top shark diving locations for your next adventure as selected by some of the world’s leading shark experts and divers.

One of the most challenging and hard to access dives, this location has one of the highest collections of marine species in Hawaii. This is truly a destination for experienced divers only and is primarily a drift dive with strong currents through the Pailolo Channel. Located on the far eastern side of Molokai near Mokuhooniki Rock the 110 deep spot feet actually feels like its raining fish as you descend along the lava pinnacle.

Other locations in Hawaii also offer accessible entry-level shark tours for non-divers (in a cage), or you can swim with the sharks with snorkels as I did on the North Shore of Oahu.

Only two destinations offer dedicated tiger-shark dives, South Africa and the Bahamas. Bimini at Tiger Beach, off West End, Grand Bahama, is the perfect destination for the Great Hammerhead Safari.

As a cage-free adventure, you’ll wait in groups on the sandy bottom as the sharks’ circle for several minutes in crystal clear and warm water. Diving at Tiger beach requires scuba certification, but there is also a Bullrun Shark Cage option for other visitors.

Neal Watson, who runs Bimini Scuba Center, and is the most preferred outfitter among experts, says, “There’s a lot we can do to save the sharks. Finding out where your seafood comes from, avoiding longline fisheries, and using your tourism dollars to visit locations and operations that help protect sharks.”

One of the four places in the world to dive with great white sharks, Isla Guadalupe is one of the most famous and highly recommended by every expert. Here you can dive with these huge sharks using open-top cages for viewing up close. The remote island with crystal clear water is located 150 miles off the west coast of Mexico’s Baja California, and is only accessible by liveaboard due to its location. It has an enormous concentration of Great White Sharks, and Scuba certification is not required for this experience.

Dr. Mauricio Hoyos says, “Cage diving is often controversial because baiting the animals has been linked with potential negative effects including habitat use, surface behavior, bioenergetics, conditioning, as well as an increase in the frequency of interactions with humans. At Guadalupe Island, the study of the effects of ecotourism is a priority for the local authorities in supporting the conservation of this species.”

The Philippines has hundreds of shark dives featuring whale sharks, reef sharks, and zebra sharks. But shark enthusiasts keep returning to the Philippines for one dive in particular – Monad Shoal in the tiny island paradise of Malapascua. Monad Shoal was made into a marine park to protect the sharks and contains the most prolific thresher shark sightings in the world.

According to Andrea Agarwal with Thresher Shark Divers, “We have been able to put laws in place for the sharks and they are now legally protected with a police patrol to back it up. This has meant that in my 18 years there, the population of sharks has actually increased instead of decreased.”

Billed locally as the “Best Shark Dive in the World,” the Shark Dive is located on the reef off the Southern coast of Fiji’s largest island, Viti Levu, where you can experience up to eight species of Sharks.

With an easy 20-minute ride on a hydrofoil catamaran from where your yacht is moored, Beqa Adventure Divers have worked closely with the Government of Fiji and the traditional owners of Shark Reef to have it designated as the protected Shark Reef Marine Reserve.

The Reserve was created to study the resident shark population and, in turn, aid in the long-term conservation of sharks worldwide. Mike Neumann, Director of Beqa Adventure Divers, says, “As ecotourism operators, all of us need to strive to have the smallest possible negative impact on the animals and their habitat, and we also need to operate safely.”

Rest Of The World

“The Egyptian Red Sea for crystal clear waters and close-up encounters with confident and curious oceanic whitetip sharks (now sadly critically endangered). These used to be the most abundant sharks in the topical high seas but have been decimated by fisheries targeting tuna.

Ponta do Ouro in Mozambique for a variety of species, including Scalloped Hammerheads, tiger sharks, and manta rays. The offshore pinnacles here are incredibly alive with marine megafauna, including dolphins and humpback whales; you never know what you’ll bump into on the way out to a dive site.

One place I haven’t visited for too long but would wholeheartedly recommend is Donsol, in the Philippines, to save whale sharks. While you cannot dive there (diving with these animals is not recommended), you can go snorkeling and experience these gentle giants in the wild. Our WWF-Philippines team has worked with the local community and authorities there to develop a highly successful model for responsible and sustainable shark tourism, so by going there, you can not only swim with these animals but also help support local communities and wildlife conservation.”