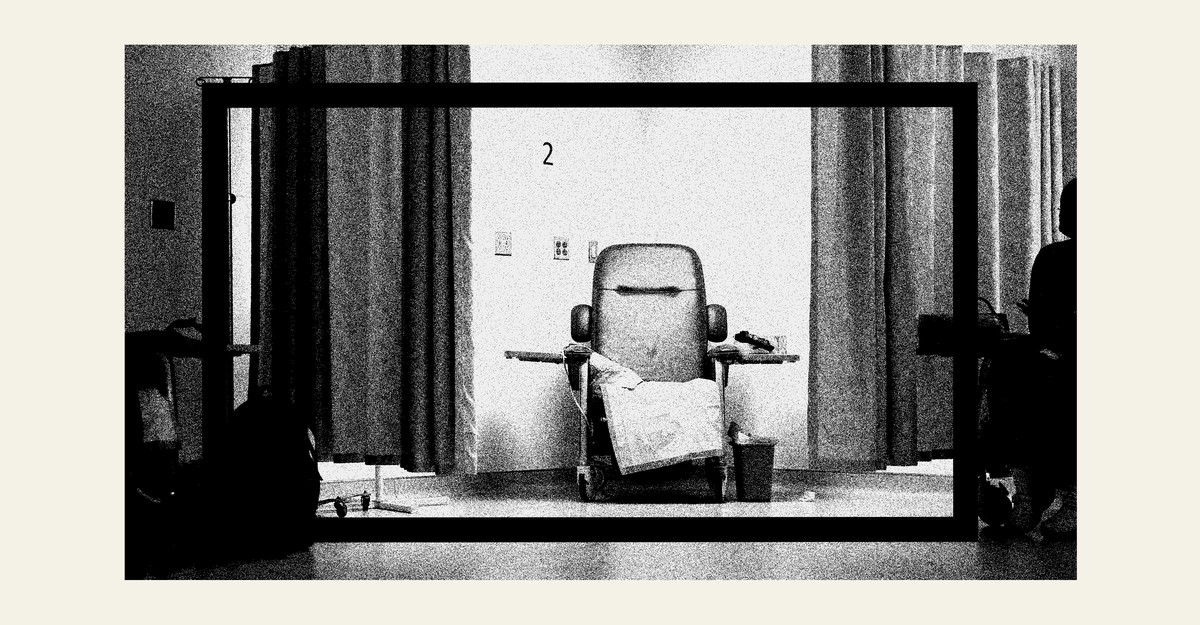 This is an edition of Up for Debate, a newsletter by Conor Friedersdorf. On Wednesdays, he rounds up timely conversations and solicits reader responses to one thought-provoking question. Later, he publishes some thoughtful replies. Sign up for the newsletter here.

Last week I asked: Should Americans have a right to privacy or bodily autonomy? If so, what should either right encompass and exclude? How would you word a constitutional amendment?

Government shall make no law abridging the right of consenting Citizens who have attained the age of eighteen to engage in non-commercial and non-lethal activities involving any sexual acts, rituals, games, meetings, performances, consumption of food, drink, herbs, plants, or medicines of their choosing in the privacy of their homes. This guarantees a right to privacy in matters that we expect while still leaving the Government free to outlaw prostitution and casinos by limiting it to non-commercial activities occurring in the home.

James doesn’t know how to codify the outcome that he wants:

Yes, Americans should have a right to privacy and bodily autonomy. The Founders clearly believed in a right to privacy; the Fourth Amendment doesn’t make any sense without an underlying right. Like all rights, this right should be abridged only for a “compelling state interest.” I want the right to privacy/bodily autonomy to protect abortion, but not to prohibit vaccine mandates against contagious diseases. How do we write that?

Timothy writes, “Body autonomy is great but must stop at the skin. A person’s right to have a contagious disease in their breath that will affect others is the classic violation of body autonomy.”

Glenn articulates what he regards as a limit on individual privacy rights:

It seems to me that the government has a compelling interest in imposing upon our privacy rights when life is in danger. The abortion issue is a complex and excruciatingly personal moral question only because more than one life is involved and affected by the abortion decision. Of course we all want it to be safe, but why would we want it to be rare unless we acknowledged some additional moral claim to be at stake? If the mom is the only life involved then obviously it is none of our business in any way at any time.

I have had the distinct privilege of having a 20 week old baby grasp at my finger from the safety of his NICU incubator. I cannot unsee what I have seen and I cannot unknow what I know.

When life begins is a metaphysical mystery, but that life exists in the womb at a very early stage is a physical science fact. Follow the science and let’s have an honest discussion about medical and social ethics. It just so happens that I was introduced to my 11 week old grandchild this week by a sonogram. I can’t say I saw a family resemblance yet, but I unmistakably saw life, and I am over the moon happy and a proud grandpa.

Read: Do voters see a difference between crime and homelessness?

Tim argues that “Americans should not have a constitutional right to privacy or bodily autonomy,” because he fears both judges and the timescale across which amendments evolve:

Putting a right into the constitution doesn’t guarantee Americans that right—it merely transfers the power to interpret that right from elected officials to judges, who seem uninterested in guaranteeing speedy trials by jury for all. Until there are some checks and balances on our third branch of government, I’m very reluctant to give it any more power.

The right to privacy and bodily autonomy is a broad right that will inevitably come into conflict with others. In a participatory democracy, it is the citizens who debate which broad rights (privacy, liberty, security, property, equality, etc.) should take precedence in which circumstances. If only judges can sort out the best balance, the rest of us are passive spectators at best. At worst, we are subjects in a theocracy with nine unelected high priests at the top of the ruling hierarchy.

A narrow constitutional right could avoid judicial overreach, but the longevity of constitutional amendments is problematic. Our founding fathers knew nothing of germ theory or genetics, let alone DNA, birth control, or in vitro fertilization. We shouldn’t use an amendment they wrote to decide a custody dispute over frozen embryos. Do we want our own limited understanding of human bodies enshrined for hundreds of years? Or should all citizens, present and future, be free to write, revise, and interpret their own laws?

Dean makes the case for refraining from enumeration:

Some rights are perhaps best left unenumerated because attempts to define and specify them can actually serve to curtail those rights rather than protect and expand them. Even a well-crafted right-to-privacy amendment will inevitably leave out important aspects of privacy because privacy is such a rich, multifaceted, irreducible concept that has weaved its way into so many different (and disanalogous) areas of our lives; it defies easy definition, and any attempt to impose one for the purposes of enumerating a privacy right will effectively narrow the scope to be protected by the Constitution.

This is especially the case given the judicial inclinations of the current Supreme Court, which has a way of pursuing an “original intent” of the Constitution that is often at odds with the plain intent of its authors. The Ninth Amendment unambiguously declares, “The enumeration in the Constitution, of certain rights, shall not be construed to deny or disparage others retained by the people.” Robert Bork may have dismissed the whole thing as an inkblot, but a plain reading suggests (if nothing else) the spirit in which claims to constitutional rights made by the people should be construed by the courts. Those so-called originalist judges who read the Ninth Amendment as an empty promise betray the clear and original intent of its authors more than those who look to the penumbras of the Constitution for guidance on inferring possible unenumerated rights.

Rather than a right-to-privacy amendment, we need justices on the Supreme Court who are at least a little more faithful to the spirit of the Ninth Amendment in their interpretations.

The concept of privacy most often implies a shameful reason or desire to hide something, whether a criminal act or something about which we feel shame or embarrassment, or a desire to deceive others about the truth. Instead of a right to privacy, a right to truth, knowledge, openness, honesty and fairness in our interactions seems a better default. Then granting someone else privacy becomes an act of trust for a fellow human. In most of human history we have lived in very small communities where privacy would be the exception and someone attempting to maintain privacy would be suspect.

Ryan believes that the most governments can do is recognize rights that individuals already possess:

Americans should have a right to privacy and bodily autonomy that encompasses all of the examples you included plus much more. We the people retain the right to barter one of our kidneys for some heroin if our Swiss bank accounts are running low. I do not need to write a new constitutional amendment—the 9th amendment will do just fine.

We do not have the right to free speech because the first amendment gives us that right; rather, that right is inherent to humanity based on first principles, whether or not the belts and suspenders of the bill of rights specifically enumerate it. The right existed in nature prior to the formation of the United States. Furthermore, any personal decision about one’s own life, no matter how depraved or ill-advised, is no business of the government, regardless of whether any constitutional amendment “grants” us that right.

And Jaleelah wants to add two sentences to the Constitution: “All persons shall have the right to bodily autonomy insofar as they do not infringe on the autonomy of others. A person or agent of the state may only infringe on a third party’s autonomy if that third party has infringed on another’s first.” She writes, “All my moral and political beliefs stem from that rule,” and she believes that “there is no other consistent and non-arbitrary limit for the right to bodily autonomy.”