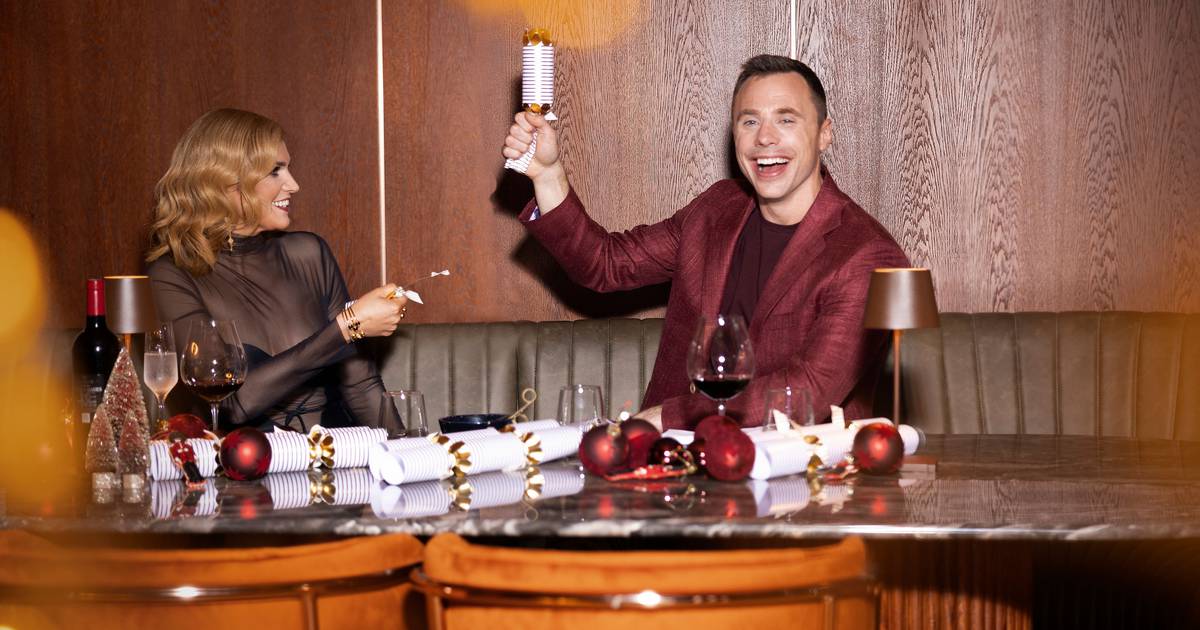 Breakfast television can be a relentless gig that requires a tonne of positivity from its presenters, but Ireland AM anchors Muireann O’Connell and Tommy Bowe have that in spades on their Virgin Media show waking up the nation with their own brand of upbeat banter – and merciless slagging of each other. After a hectic year, they are looking forward to some downtime this Christmas and tell us what makes the festive season for them.

You have great banter on set. Is it just for show?

Tommy: When I played rugby it was close-knit and like a family and then I was fortunate to join Ireland AM and now with Muireann and Alan [Hughes] we’re like a family; there’s a lot of love there. Some days we’re at each other’s throats but we feel privileged to be welcomed into people’s homes. However, I’d say I drive her to drink and for this reason I’ll be buying her some bubbles this Christmas!

Muireann: He’s like my annoying brother and I’m the annoying sister, we have that kind of banter. However I always feel I’m never hanging out on a ledge either, he’s always got my back which is really nice. It can take a lot of work to get that relationship and sometimes it doesn’t happen but he’s hilarious. He’s very glass half-full while I’m glass half-empty, he has a positive outlook on life and that rubs off on me. It’s an utter pleasure to work with him. Last year I bought him socks and to be honest, it’ll probably be the same. I mean, what do you get for the boy who has everything!

Where will you spend Christmas?

Tommy: In Wales with my wife Lucy’s family and the kids because we haven’t been there in a couple of years. I’ll cook on the day and we’re hoping to go for a swim in the sea on Christmas Day. My family always do the Christmas Day swim up home in Monaghan. I would have always had a rugby match on so mum and me would watch from the sidelines while the rest of the family jumped in.

Muireann: I’ll be spending it with my mum and then heading to my sister’s for dinner. My poor sister will do the dinner but my mother will bring a bucket of her own gravy.

Do you glam up at Christmas?

Muireann: I hate glamming up on the day and am grand in a tracksuit. In the lead up, I love a sequin. I hit them around Halloween and will wear them until January.

Tommy: The kids make it. Emma is five and Jamie is two and they’re already buzzing for it. It’s only going to get better the older they get and it brings back memories of my own childhood at Christmas.

Muireann: Lazing around by the fire watching Indiana Jones movies is Christmas Day for me. Maybe a walk around the block and just being with family and friends; it’s such a cliche. We’ll play a board game at around 7pm. Taboo is a big one for us at Christmas, as it’s really interactive.

What will you have to eat?

Tommy: I’m in charge of dinner; I’m not great at making ham but will have turkey, stuffing, good gravy and I pride myself on my roasties. I’m not a fan of Brussels sprouts.

Muireann: Mum will do about five hams that will be eaten over two days. We love a ham sandwich at Christmas. I’m hoping there’ll also be a prawn cocktail and a baked Alaska. We’re totally stuck in the last century when it comes to food.

Tommy: It’s changed since we’ve had kids. It used to be a great opportunity to catch up with friends and spend time with siblings but now you live through the excitement of children, you see it through their eyes. It’s a lovely warm time and I appreciate it so much more now I have my young family.

Muireann: Getting a table in a restaurant is number one. We have a big night on December 23rd, which is the Limerick Christmas party with all the gals from school and college. We might go to Cornmarket and end up in Tom Collins or Nancy’s. You see people you haven’t seen all year. In Dublin we’ll do one in Mr S or Delahunt’s and the Headline is our local and they do a lovely Christmas. We know all the locals and there’s a great community vibe.

Muireann: Jewellery, as I love a few sparkles but it’s more about buying the best present for my mother – something she won’t return. She likes vouchers but I hate them because it’s impersonal. I’m determined to get her that perfect gift this year.

Tommy: I love National Lampoon’s Christmas Vacation. Daddy’s Home 2, with Will Ferrell is a really lighthearted fun movie too.

Muireann: Scrooged or The Family Stone are my favourites.

Tommy: Driving Home for Christmas; having not lived in Monaghan for a long time it’s one of those ones you stick on when you’re heading home on Christmas Eve.

Muireann: Bob Dylan’s Must Be Santa is bonkers, but I love it.