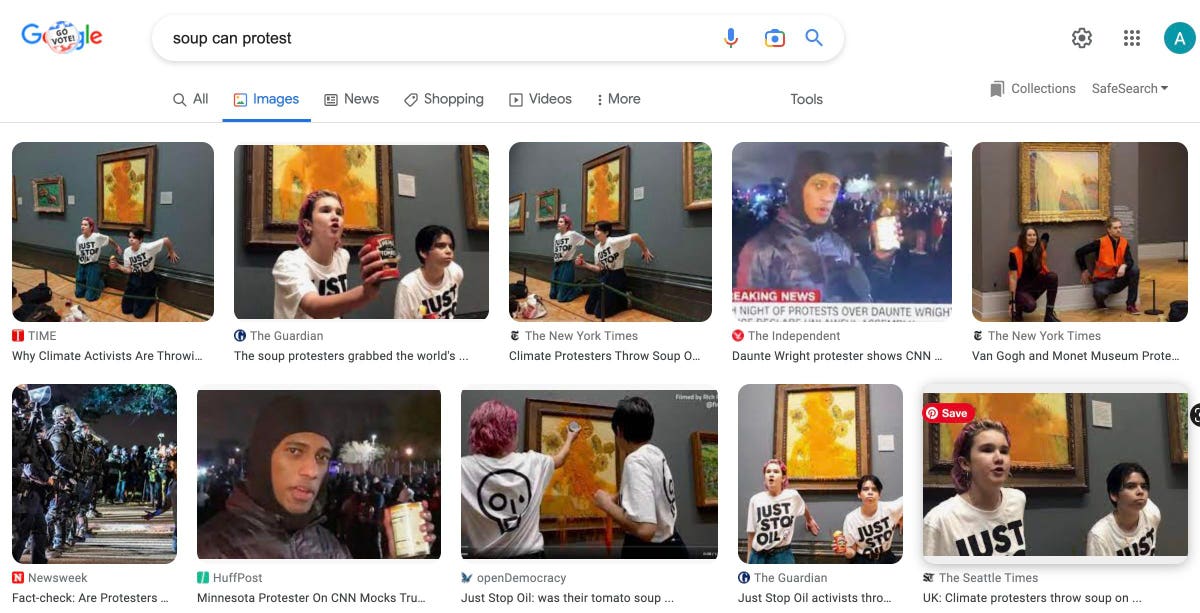 This story is a continuation of Part 1 and Part 2.

25 hours later, Holland and Plummer were released from remand and seen in court. By then, incident had gone viral.

‘The soup throwers’ had received more media attention than almost anything else Just Stop Oil has ever done, inspiring further events by Just Stop Oil and others within the A22 umbrella network (including Last Generation and XR Australia).

In the wake of global catastrophe, the activists found it as surreal as they did bizarre.

“It takes two people throwing soup at a painting to get people talking about the climate crisis, and these millions of lives have been destroyed by climate disaster. It’s horrible that we’ve gotten to this point,” Plummer said, “But people are talking about it now. They’re not just talking about what we did, but why we did it, and that’s what we need.”

The day after their release from court, Plummer turned on their phone to be hit with a flurry of hate messages. Threats against their family, who had no idea what was to come, and certainly no involvement, completely baffled them.

Hate comments dehumanized them. Some journalists scrutinized them with judgement that bordered on hostility.

“This isn’t a popularity contest,” Plummer often repeats, “We’re making change. The suffragettes were famously despised. Martin Luther King was voted the most hated man in America when he was alive.”

Plummer is familiar with history and its role in their ability to live a safe and happy life.

“As a queer person, the reason I’m able to vote, to go to university, and hopefully someday marry the person I love is because of people who have taken part in civil resistance before me.

That’s part of what gives me hope as being part of Just Stop Oil. History has shown that these types of tactics are the only option we have left to get the reaction we need in the time scale we have.”

The process has proved draining.

“It’s been the most exhausting, intense, oftentimes stressful months of my life,” Holland said.

“It’s been a more emotional two weeks than I could have ever expected,” Plummer echoed.

Yet the tide was starting to change.

Hours after receiving the crop of messages on their phone, Plummer was on campus when two Pakistani students approached them, their families still in their home country.

The fellow students thanked Plummer for what they had done and started crying.

One student’s uncle had been displaced by a flood in Pakistan and was now a homeless refugee. To them, Plummer was providing a voice for tragedies falling on deaf ears. That immediate connection was so powerful, and the first of many punctuations of love and support in the media barrage.

‘I hated what you did, but now I’ve had time to think about it, and you guys were right,’ said other supporters, ‘Thank you for doing this.’

“We’re not criminals!” Plummer cried, “I’m a scared kid trying to fight for my future. People realize that, and that this an appropriate action. Civil resistance is the only place to be at the moment.”

Not all art lovers were immediately convinced.

‘What did Van Gogh ever do to you?’ others countered angrily. After all, Vincent van Gogh is known to be, in Plummer’s words, “somewhat of an underdog.”

“He really truly suffered in his lifetime. He literally wasn’t appreciated. He lived and died in debt,” Holland continued in acknowledgement, “He was completely penniless. But that’s why we chose a Van Gogh painting. Because if he’d been alive today, under this government, he would’ve been one of the people queueing up to food banks running dry after 90 minutes. He’d be one of the 2000 families that’s going to be forced into pure poverty this winter.

“It’s people like Van Gogh, especially as he was mentally ill, it’s people who are suffering the most under the billionaires who are driving this cost-of-living crisis. We need people to understand that—that even though Van Gogh is so revered by us today (and rightfully so), if he had been alive under this society, if he’d been living under this government, no one would know his name. He would have just lived and died suffering under the Tory government.”

In the moments before they splattered the soup, Plummer and Holland had stood in the gallery and learned about the painting. They learned that one of the reasons Van Gogh chose to use such a vibrant yellow in his mental anguish was to symbolize hope.

They were hopeful, too.

Holland and Plummer have a Magistrate’s Court date pending in December for damages, and both have pled not guilty. Fearful as they are, the legal consequences feel inconsequential when compared to mass wildfires, severe drought, famine. Either you starve in a jail cell, or you starve at home. The stakes are too high.

At worst, there is expected to be a hefty fine.

“If there is any justice—not even justice, just common sense,” Holland said, “We will be found not guilty.”

The message seems to be working. November 4, just two weeks after the soup was thrown, marked the first day in history where half the UK’s energy came from offshore wind farms.

Hearing this news, Plummer and Holland felt uplifted and proud. They desperately need a break, but they aren’t ready to take one until their message has been heard.

Meanwhile, Home Secretary Suella Braverman released a new Public Order Bill to the House of Commons, trying to clamp down on protests like Just Stop Oil. Braverman believes that they are causing disruption on the roads, posing “a serious adverse effect to public safety”.

Although museums and art are not mentioned, the complete bill would bring about harsher penalties that could include police force and imprisonment, mainly for demonstrations that pose a threat to “infrastructure”.

“We’re getting through to them,” Holland said fearlessly, “Politicians are trying to put in place as many obstacles as possible—obstacles that if we come together, if we have the numbers for, we can overcome so easily.”

Their court date is December 13. Until then, the battle continues.

“We won’t consider ourselves successful until our demand of no new oil is met,” Plummer said, “…I wish more than anything that I could say that we’re going to be successful, because otherwise our future is catastrophic.”