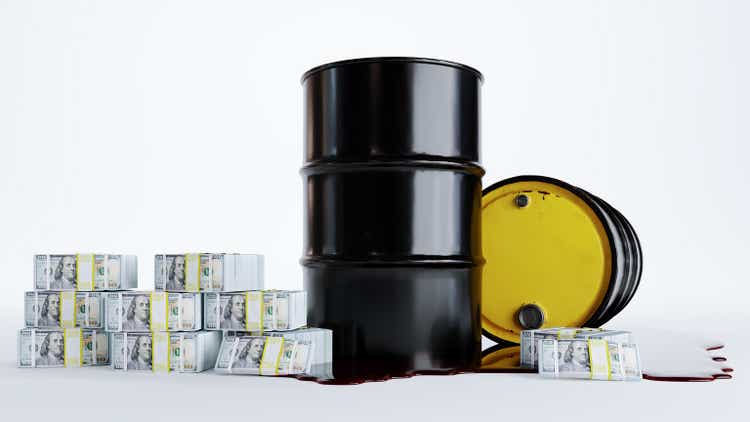 One of the easiest ways to gain exposure to oil prices is buying oil royalty companies. I have discussed several of the larger oil royalty companies here on Seeking Alpha before but in this article I wanted to explain my thesis for Source Rock Royalties (TSXV:SRR:CA), a nano-cap royalty company which completed its IPO in the first quarter of this year. Source Rock combines a positive free cash flow with a very attractive dividend and an even more attractive net cash position.

Source Rock Royalties has its main listing in Canada where it’s trading with SRR as the ticker symbol on the TSX Venture Exchange. As this is a relatively new listing, the trading volumes are still relatively low but increasing. As always, it’s very important to work with limit orders exactly because of the low market capitalization.

The business model is pretty simple, and the current dividend is highly sustainable

I don’t think I need to explain the business model: Source Rock is an oil royalty company. It owns a royalty on certain oil assets, and for every barrel of oil the underlying operator sells, it needs to give SRR a cut. SRR reports its attributable production in barrels of oil-equivalent per day and in the first quarter this attributable production rate came in at approximately 165 barrels of oil-equivalent per day.

As Source Rock hasn’t provided its Q2 financials yet, the Q1 result is the best we can work with, fully knowing Q2 will be better thanks to the higher oil price.

Selling oil at an average received price of C$102.47 per barrel of oil-equivalent resulted in total revenue of just over C$1.5M, and as the total cash operating expenses were just C$126,000 for the quarter (and this includes some non-recurring expenses related to the going-public transaction), the total operating income was approximately C$841,000. As you can see below, the majority of the operating expenses consists of depletion expenses.

While this did not cover the C$0.015 quarterly dividend, I’d like to make two remarks here. First of all, Source Rock completed its going-public process and this undoubtedly resulted in higher administrative expenses. That being said, I do not want to make an adjustment for this as the simple fact of being a listed company will likely keep the G&A expenses at an elevated level.

Secondly, keep in mind that the EPS is perhaps not the best metric to judge a royalty company. If we move over to the cash flow statement you’ll understand what I mean as the vast majority of the operating expenses are related to depletion expenses. That’s a non-cash expense and does not impact the incoming cash flows as Source Rock does not have to contribute to the operating partners. As you can see below, Source Rock does not have to make any follow-on investments in the assets.

And this puts the company in a whole new perspective. As you can see above, the reported operating cash flow was C$1.29M, and after taking the changes in the working capital position into account, the adjusted operating cash flow was C$1.17M. That’s almost twice as high as the reported net income and using the current share count, the free cash flow per share came in at C$0.026. Which provides a coverage ratio of 173%. And as you can see below, the current dividend should remain safe all the way down to a received oil price of just C$60 per barrel. That’s roughly US$48 on an oil-equivalent basis.

An additional extremely interesting feature is the squeaky clean balance sheet. Source Rock raised cash when it went public as the company issued 15.3M units at C$0.90 with each unit consisting of a share and ½ warrant. Those warrants are trading as SRR.WT but considering the exercise price is C$1.20 they fall outside the scope of this article.

That cash was integrally added to the balance sheet (existing shareholders did not receive any proceeds) and this results in the following balance sheet:

The net working capital position as of the end of Q1 was C$14.6M which is approximately C$0.325/share. This means that if you buy a share for C$0.76 (the closing price on Friday) you’re essentially just paying C$0.435 for a stock generating C$0.026/share in free cash flow in the first quarter of this year. And given the current payout ratio, Source Rock is adding about C$0.01/share to its net cash position on a quarterly basis.

What are the main risks and challenges?

So why is Source Rock trading at these levels? There are some elements I’d like to highlight here.

First of all, there’s the market cap issue. With a C$35M market cap, the company is simply too small to pop up on a lot of radar screens. That’s a pity but that also creates this opportunity.

Secondly, I think it’s safe to say the balance sheet is sub-optimal. Source Rock kicked off its go-public transaction early in the first quarter but only completed it a little bit later, in February. It was great to see the company raised almost C$14M but the timing wasn’t great: The oil price had started its move up and Source Rock couldn’t (or didn’t want to) put its cash to work by buying royalties at a higher price they had in mind. Despite the improving oil price, the IPO was priced near the bottom at C$0.90 so that created an interesting situation for participants in the IPO financing: The oil price did move up but unfortunately this also meant SRR couldn’t complete any deals.

A third risk is the relatively low production rate. With an attributable production rate of just 165 barrels of oil-equivalent per day it just simply doesn’t have the economies of scale. Fortunately, the assets are backed by a variety of underlying operators so fortunately SRR’s asset base is not just one royalty on one asset operated by one operator.

And finally, not a risk but a potential bonus: The higher interest rates could have a very positive impact on Source Rock Royalties. If the company would start earning a 2.5% interest rate on its soon to be C$15M+ in net cash, the annual free cash flow result could increase by almost C$0.01 per share, making the dividend even safer.

As the potential for growth will have to come from the operators actually increasing the oil production on the lands where Source Rock has a royalty on, I’m looking at SRR purely from an income point of view. The current dividend of C$0.06 per year represents a yield of 7.9% and considering this represents a payout ratio of less than 60% based on the Q1 performance, I’m very happy with that yield.

I’m not excluding potential growth as the current oil price is incentivizing the operators to increase production. But I’m looking at Source Rock Royalties as a cash-backed income pick.