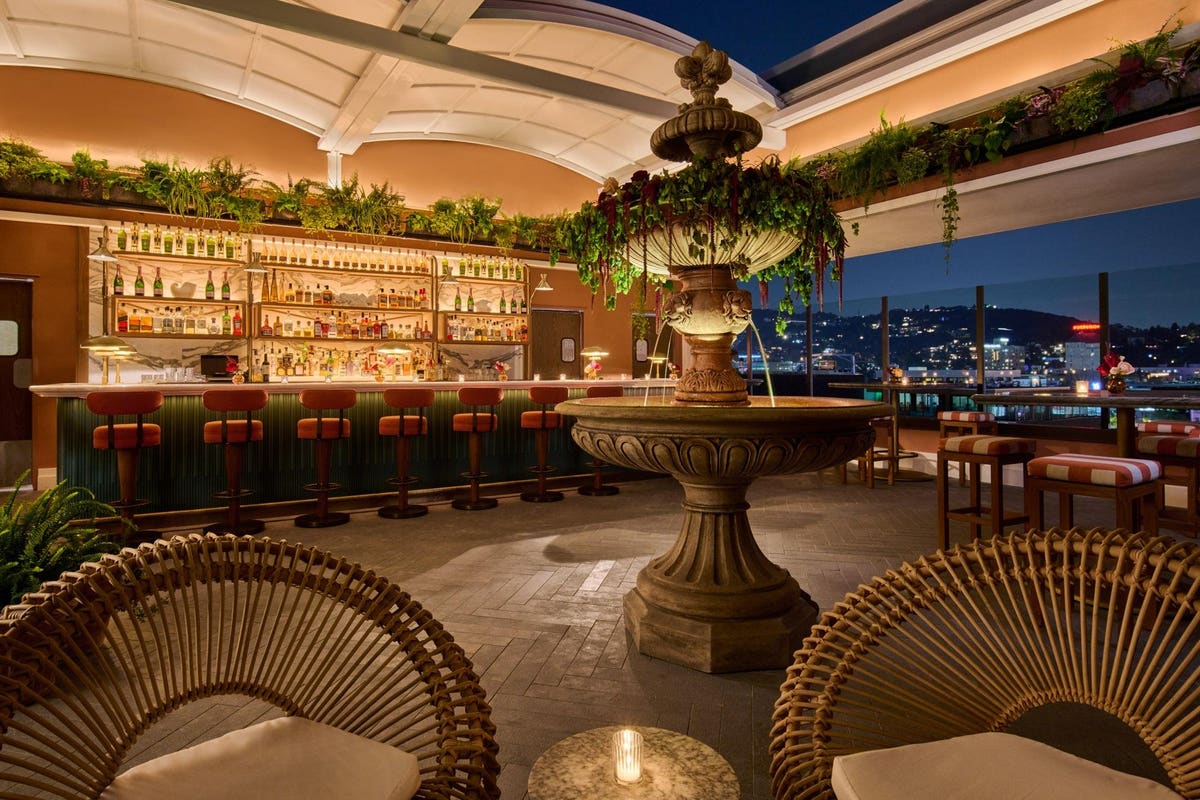 Not too long ago in Los Angeles the only reason for turning off Sunset Boulevard onto Wilcox Avenue was to look for parking before hitting the Cat & Fiddle Pub. No longer. The area has been transformed with new boutique hotels and culinary hotspots anchored around the intersection of Wilcox and Selma avenues. Rooftop bars with views of Downtown L.A. and the Hollywood Hills are the place for drinks now — meanwhile the Cat & Fiddle has relocated a mile south.

Nicknaming the area the ‘Vinyl District,’ a nod to the history of recording studios and record stores in the area, real estate developer Relevant Group has invested around $500 million into an area compact enough that one of the other views from the rooftops and hotel rooms — are the rooftops and rooms from the other hotels. If the party across the street looks fun no reason you can’t check that out as well.

The Thompson Hollywood, located on Wilcox, opened in August 2021 with 190 rooms on 11 floors and was designed by London-based Tara Bernerd & Partners in a “West Coast Modernism meets Hollywood Glamour” style. The open space of the lobby and bar provides a comfortable space for lounging or to have a drink but the real action is up on the rooftop. After heading down a walkway lined with Cyprus trees guests at the French Riviera-inspired Bar Lis enjoy cocktails and canapes from chef Lincoln Carson in both indoor and outdoor seating and are treated to music ranging from jazz nights to dancing with contemporary DJ performances. Chef Carson also helms the hotel’s restaurant Mes Amis, a Parisian brasserie where a Selection of East and West Coast Oysters can be enjoyed before your Steak Frites. Rounding out the Thompson Hollywood’s dining opportunities, all conceived and operated by Ten Five Hospitality, is The Terrace, also the rooftop, serving food all day and providing for all your poolside needs.

A few months after the Thompson Hollywood opened, it was joined by the tommie Hollywood around the corner on Selma Avenue. Designed by L.A.-based Studio Collective in a Midcentury Modern style, inspired by studying local homes from the 1950s and 1960s, the hotel features 212 rooms over nine floors. It’s an elegant but slightly more relaxed younger brother to the Thompson. Top draw here is the amazing Tulum-inspired KA’TEEN restaurant, where Chef Wes Avila offers Yucatan delights — the expansive outdoor dining space is a long way from the chef’s original Guerilla Tacos street cart. Standout appetizers include Kanpachi Crudo and Tuna Aguachile along with entrees of Lamb Shank Barbacoa and Carne Asada Ribeye — to be enjoyed with their agave cocktails like their Witchdoctor and Gypsy Fever. Ten Five Hospitality is responsible for the restaurant and the rooftop bar here as well — the Desert 5 Spot is a Palm Springs-inspired lounge for drinks and live music next to the rooftop pool.

The ‘Vinyl District’ isn’t relying on just hotels to bring in visitors. Situated between the Thompson and the tommie is one of L.A.’s hottest new restaurants, and hard-to-score reservations, Mother Wolf. Chef Evan Funke’s palace of Roman cuisine features thin pizzas and handmade pastas — standouts include everything, but especially the Mezzi Maniche Al Cinghiale (wild boar ragu) and the Mezzi Rigatoni Alla Carbonara. A large selection of wines are available by the ‘quartino’ as well as an extensive list of Italian bottles. Chef Funke is also behind the food program at Citizen News next door, a newly remodeled 30,000 sq. ft. event and performance space building.

While all the above places can be enjoyed without leaving the block, those brave enough to cross two street corners and walk 400 feet can explore the Dream Hollywood hotel which opened in the relatively pre-historic year of 2017. Designed by the Rockwell Group, the 178-room hotel features pieces by Los Angeles-based street artist Thierry Guetta in the lobby, along with an NFT art exhibition from The Crypt Gallery. The 11,000 sq. Ft. Rooftop space, The Highlight Room, encompasses dining, drinks and the pool and grill. Two adjacent places are TAO Asian Bistro, which serves Japanese/Chines/Thai dishes, and the third location of Beauty & Essex.

Also adding to visitor comfort are two robot butlers, Alfred and Geoffrey, that greet visitors in the lobby as well as deliver food, drinks and amenities to rooms. They will politely ask for your cooperation if you are in their way while entering and exiting the elevator. This led an interesting experience at a recent stay, when Alfred was trying to enter the car and Geoffrey was trying to exit — leading to an infinite loop of them asking each other to politely get out of the way. Fortunately non-robotic staff was on the scene to work out a compromise between them.